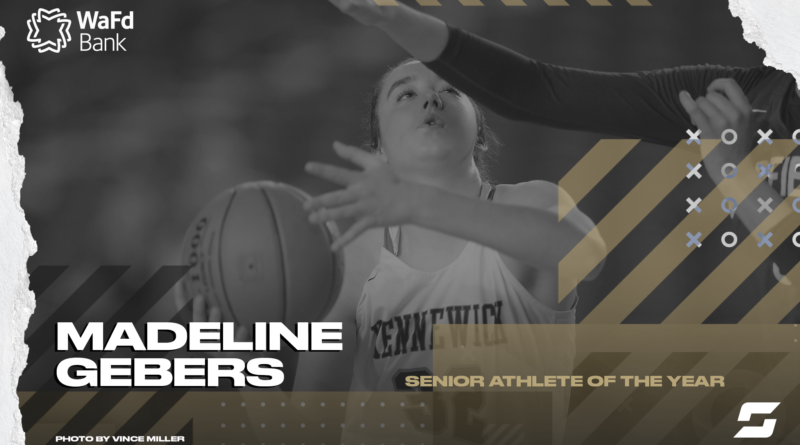 Some athletes just get used to being insanely busy.

Kennewick High School’s Madeline Gebers is one of them.

“I cannot imagine having an offseason,” she said.

Which is why, she notes, she will try and juggle playing three sports – volleyball, basketball and track and field – starting next fall at Spokane Falls Community College. She is also SBLive WA’s Class 3A Senior Female Athlete of the Year for 2020-21.

“She does whatever it takes for her teams to succeed,” Kennewick girls basketball coach Daron Santo said.

Besides having an insatiable work ethic – she is constantly working out – Gebers also has unique arm talent, which has contributed to her vast success as an outside hitter/setter in volleyball, an interior scorer/rebounder in basketball and javelin thrower.

“I have four younger brothers, so I grew up throwing a football – and have always been able to throw it really, really far,” said Gebers, who has been known to throw it 50 yards or longer.

She also has a knack of adjusting well on the fly, or picking up a new skill quickly.

Case in point: During her ninth grade season in volleyball, she made the switch to setter – and instantly became a starter for the Lions.

And as a senior in basketball, when the team lost both guard Avery Fiander (injury) and post player Alexes Stein (academics) early in the season, Gebers suddenly became the do-everything forward with four underclassmen on the floor.

“She is not only a talented player, she is a smart kid,” Santo said. “She just figures out what is going to be the best way to succeed.”

Well, succeed in almost everything.

“I went to Topgolf in Arizona, and was awful at it,” Gebers said. “And my (club) teammates will say, ‘Maddie can do everything but hit a golf ball.'”

Next step: Signed to play all three sports at Spokane Falls Community College where she will also study software engineering.

Career accomplishments: Leader on two state-tournament teams as a junior in volleyball and basketball (Lions lost to eventual state champion Garfield in their opener). Four-year letter winner was selected to all-MCC basketball teams three times, including her final two seasons on the first team. Scored 1,057 points for her career at Kennewick. … Four-year letter winner in volleyball who was a first-team MCC setter in 2019-20. … Was the 3A runner-up as a sophomore in the state javelin with a throw of 128-9 – behind winner Jazlyn Romero, of Hermiston (144-11). … Plays for Sagebrush Hoops in AAU. … Great-grandfather was Les Steers, the former world record-holder in the high jump in the 1940s.