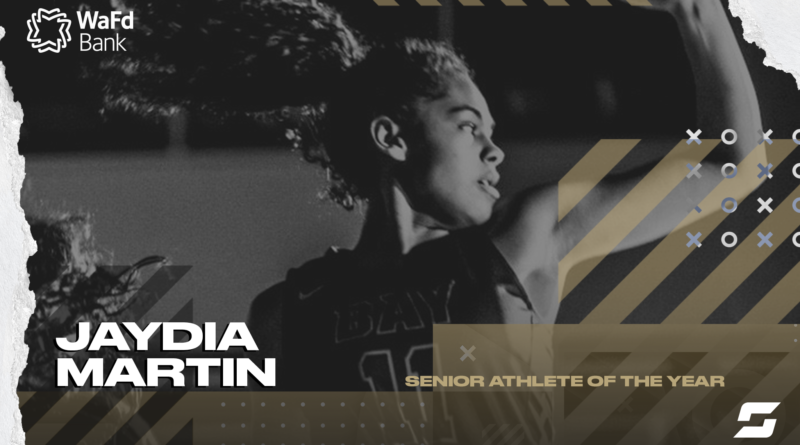 Chances are, if you are looking for Jaydia Martin – she’s in a gymnasium somewhere around Clark County.

It could be at Hudson’s Bay High School where she starred in two sports. She earned Greater St. Helens MVP honors as both a setter in volleyball, and a wing scorer in basketball for the Eagles.

Or she is likely in the familiar gym where some of the most competitive adult men’s basketball leagues in Vancouver are held.

“My mom (Tanya) plays in the men’s leagues she coordinates at Ashley (Corral’s) gym,” Martin said. “So if I want to play, I know all the guys. I’ve known them since I was a baby.”

One thing is for certain about the 6-footer headed off to play next season at Eastern Washington University: She never backs down from a challenge.

“She has always been defensive-minded in all sports,” said Tanya Martin, who is an assistant coach on the Hudson’s Bay girls basketball team.

“I remember when she was growing up at an early age playing soccer, there wasn’t supposed to be goalkeepers. But she would just stand in front of the goal anyway, and get in trouble.”

That unwavering determination has led her on a pair of memorable junior-year journeys in high school.

In the fall, Martin was asked to switch volleyball positions – from outside hitter to setter. She responded with a career year, and was the league MVP.

“Volleyball is my fun sport, to be honest,” Martin said. “That wasn’t my position, so I wasn’t really expecting anything … so that was weird. But I got to play the entire (match).”

And during the basketball season in winter, teammate Aniyah Hampton was lost for a second year due to injury. Martin’s role suddenly including being a ball-handler.

Under her guidance, the Eagles advanced to the last-stop state tournament for the first time since 2006-07.

“Not having her forced me to step up more … but it helped me in a way,” Martin said. “Everybody worked pretty hard that year, but I was not expecting to go that far without her.”

Next step: Signed to play basketball at Eastern Washington University where she will also study kinesiology.

Senior-year highlights: A year after being voted as the 3A Greater St. Helens League player of the year in girls basketball, Martin was MVP again as – this time in the 2A GSHL. In 11 games, she averaged 17.6 points. 7.9 rebounds, 6.0 steals, 3.8 assists, 1.1 blocks per game for the league-winning Eagles.

Career accomplishments: Led the school to back-to-back postseason trips in basketball, including a berth to the Tacoma Dome in 2019-20. The Eagles did not place. … As a junior, accomplished the rare feat of being a league MVP in two sports – the 3A GSHL player of the year in volleyball (setter) and basketball (guard/forward). … Was a four-time GSHL first-team selection in basketball, averaging 17.4 points and 9.1 rebounds as a junior. Finished with 1,439 career points, eclipsing the 1,000-point mark during that run to the 2020 state tournament. … Was selected to the all-league volleyball team every year, including her first-team nod as a junior. … Club basketball program is Vancouver-based Upper Left Legion. … Played soccer for nine years before high school.