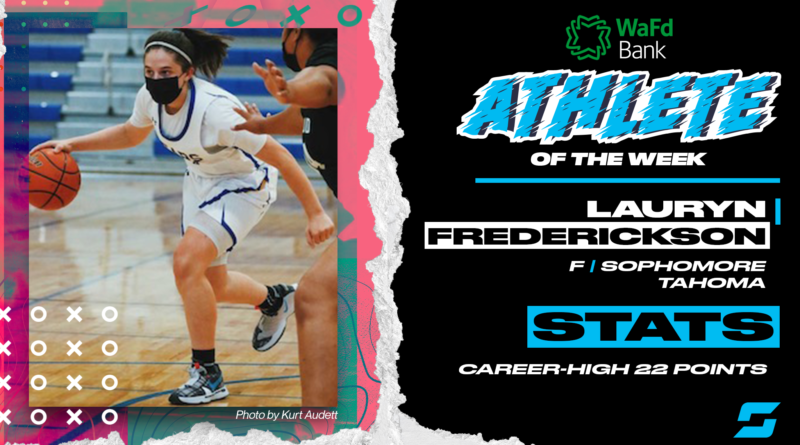 In a 4A NPSL showdown with Decatur, the sophomore came up big – a career-high 22 points on 10-of-15 shooting in a victory. The Bears remain undefeated.

Frederickson received 34.81% of the vote, beating out Omak’s Aaliyah Marchand who finished second with 21.12%. Eisenhower’s Kiana Yesiki finished third with 13.09% and Chiawana’s Delaney Pink finished fourth with 12.13%. There were over 28,000 votes tallied this week!

Chloe Williams, Central Valley girls basketball: The senior guard led all scorers with 21 points on 8-of-13 shooting, including three 3-pointers, with five rebounds and four assists as the Bears defeated Mead in the GSL title game.

Maleek Arington, Auburn basketball: The junior point guard had 25 points and 11 assists in a 4A NPSL win over Kennedy Catholic, and a team-high 19 points in a win over Kent-Meridian. The Trojans are undefeated.

Tyler Bilodeau, Kamiakin basketball: The junior forward rallied the Braves from a big halftime deficit, tallying 10 of his team-high 22 points in the third quarter as Kamiakin beat Walla Walla for the MCC title.

Ashlyn Wallace, Clarkston girls basketball: The Idaho-bound point guard and reigning 2A player of the year had 22 points, seven rebounds and seven steals in leading the Bantams past West Valley of Spokane for the 2A GSL title.

Tyson Degenhart, Mount Spokane basketball: The Boise State-bound forward finished up in style – a game-high 24 points, including two big free throws in the closing seconds – as the Wildcats edged Central Valley for the GSL title. He scored 16 of those points in the first half.

Julianna Walker, Annie Wright girls basketball: The Syracuse-bound guard scored 28 points in her final game as the Gators beat Cascade Christian for the 1A Nisqually title. She leaves high school at No. 3 all-time with 2,834 points.

Robert Galindo, Davis basketball: The junior erupted for a career-high 41 points as the Pirates defeated Eastmont in a CBBN third-place game.Kelson Gebbers, Brewster basketball: The sophomore tallied a game-high 31 points, including three 3-pointers, with seven rebounds and four assists in a win over Manson.

Teagan Colvin, Liberty of Spangle girls basketball: The touted ninth grader led the Lancers to the 2B Northeast title with a game-high 31 points in a victory over Lind-Ritzville/Sprague.

Diego Jaques, Walla Walla basketball: The junior guard led the Blue Devils in both final MCC playoff games – 26 points in a semifinal win over Richland, and a game-high 23 points in a loss to Kamiakin in the title game.

Teal Soaring-Eagle, White Swan basketball: The senior forward continued his run of 20-or-more-points scoring games with 25 points against River View, and 29 points against Columbia of Burbank.

Aaliyah Marchand, Omak girls basketball: Marchland broke her own record for the most 3 pointers in a game, tallying eight 3 pointers in Omak’s victory over Cascade.