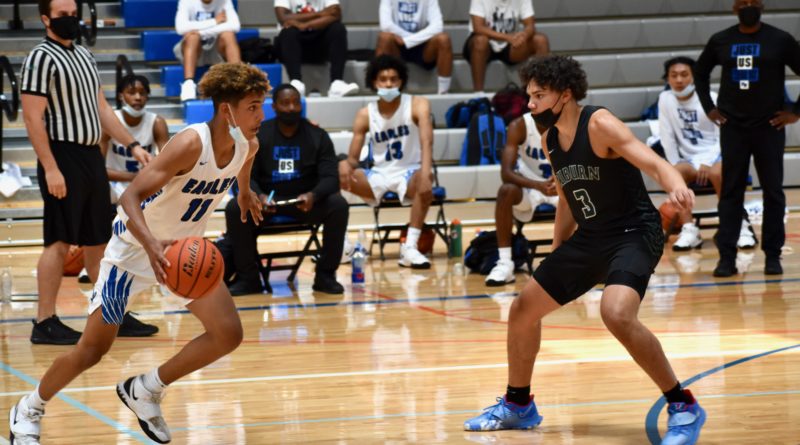 The Auburn High Trojans had not only not taken a loss this spring – they had not been in a close game all season.

In a matchup of unbeaten NPSL divisional winners, the Trojans rallied in the second half to sneak out a 55-53 victory in the crossover championship game.

Junior Tre Blassingame scored all of his team-high 15 points in the second half before fouling out, and the Trojans pressured Marcus Cole into a difficult game-winning 3-point shot attempt that was a little strong in the final seconds.

Amar Rivers added 14 points for Auburn, which finished 14-0 on the season. Sophomore Vaughn Weems led all scorers with 19 points for the Eagles (12-1).

It was Federal Way’s first home loss since the 2013-14 season with it was upended by Beamer.

“We kind of had to hold on a little bit there at the end, and I was really proud of our defensive effort tonight,” Auburn boys coach Ryan Hansen said.

“I give a lot of credit to Federal Way. Those kids played their (butts) off.”

Here are three takeaways from the NPSL crossover championship game:

‘BLASSINGAME’ IS SHORT FOR ‘HE’S GOT SO MUCH GAME’

Auburn led much of the first quarter – but then saw Blassingame whistled for a second personal foul and go to the bench for the rest of the half.

Except for Rivers (10 first-half points), the Trojans’ offense wasn’t sharp – and the visitors trailed at halftime, 29-23.

Before being outscored, 16-9, in the second quarter, Auburn had gone 57 consecutive quarters this spring outscoring its opponents.

“That is a position we’d never been in before,” Hansen said.

Aggressively seeking his shot, he tallied 11 points in the first five minutes of the second half – capped by a deep 3-pointer to give the Trojans a 42-37 advantage.

“I wanted to win,” Blassingame said. “That is my whole purpose.”

It might be premature to call Blassingame the undisputed alpha male on this squad, but one this is for certain – he is the team’s most assertive scorer.

His game has expanded greatly, going from a wing shooter to a reliable scorer on all spots on the floor.

“He really managed (sitting out in foul trouble) really well, and came out and got us going in the third quarter,” Hansen said.

And a sidenote: University of Washington men’s basketball coach Mike Hopkins and assistant Will Conroy traveled down to the game Saturday primarily to check out Blassingame.

IS AUBURN A VIABLE CLASS 3A STATE CONTENDER NEXT WINTER?

Given the dominance of the Metro League at the 3A level, this is an interesting question.

There is no question Auburn has high-level pieces with Blassingame and Maleek Arington, who are NCAA Division I recruits. And no player has taken a bigger jump this season than Kaden Hansen.

The Trojans will surely miss Rivers, a glue guy who does a little bit of everything. Ryan Hansen thinks Semaj Brown can grow into that role moving forward.

And Luvens Valcin could be a breakout star as a sophomore in 2021-22.

Teams with pressure-breaking ball-handlers who have interior scorers could pose a problem for the Trojans.

Is next year their year?

“I am so excited for next year, looking forward to big things and making a lot of noise.”

IF THIS WAS FEDERAL WAY’S DIP YEAR, EAGLES SHOULD FLY AGAIN SOON

Before the 4A NPSL season began, a few coaches mentioned to SBLive WA that if there was a year to knock off the Eagles – reloading young – this would be the year.

Well, they not only ran through everybody in their way until Saturday – the three-time 4A champions (2009, 2015, 2016) are now back on the state map moving forward.

Weems blew up in his first season as a varsity starter, and is easily the team’s most explosive scorer. Forward Dace Pleasant is Federal Way’s most skilled player – and has the frame and acumen to really emerge as a big-time recruit. And Isaiah Afework – quick hands and all – is a perimeter agitator.

All three will be juniors next season.

Throw in the fact that a talented group of incoming ninth graders are coming, and the Eagles could be building toward another championship run.

“It is promising, man,” Federal Way boys coach Yattah Reed said. “They have the right attitude. They want to get better. They embrace this moment in what it takes to win those big games.”