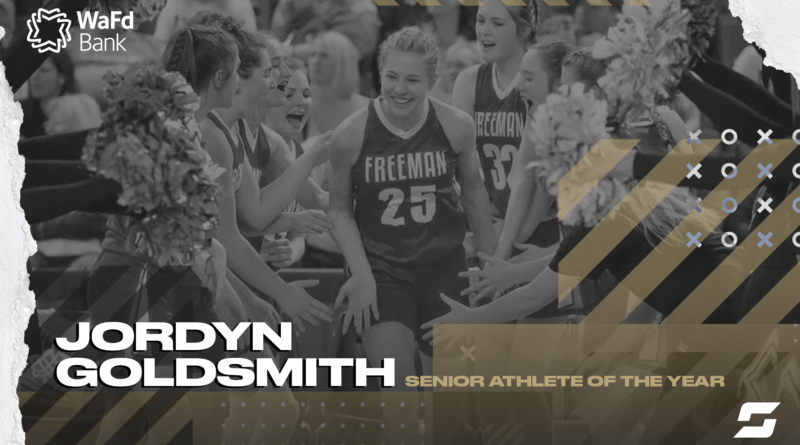 All you really need to know about top Freeman High School athlete Jordyn Goldsmith is what transpired in May.

A San Diego State volleyball signee, Goldsmith consulted with her college coaches about playing a senior season in basketball. Their recommendation was for her to take it easy to protect against any potential injury situation before enrolling.

Well, after watching the Scotties lose their season opener from the bench as the team manager, Goldsmith immediately reconsidered her decision.

“I knew I would be able to help them and change (the outcome),” said Goldsmith, a 6-foot-2 left-hander. “The loss bothered me, and I did not want to have to watch it repeatedly.”

Two nights later, she was back in uniform – and eventually helped the team win one final 1A Northeast District title.

“What I will appreciate the most about her, for somebody who is talented with that many skills, she really is a team player,” said Eva Windlin-Jansen, Freeman’s recently-retired volleyball coach.

“Freeman Strong” is a very real feeling for Goldsmith, SBLive’s four-sport Class 1A Senior Female Athlete of the Year for 2020-21.

Back in 2017, just a couple of weeks into her high school tenure, Goldsmith was one of four students (and three girls) shot by a classmate on campus.

The damage required surgery, which was expected to keep her out of athletics a minimum of six months.

But the teenager worked so hard in her rehabilitation, she not only was cleared for the start of basketball season – she was on the Freeman bench for the Class 1A volleyball championships.

“With her being back with us at state,” Windlin-Jansen said, “everyone cried.”

It was the first of six state-tournament trips for Goldsmith as an athlete at Freeman – three in volleyball and three in basketball.

“I am so proud,” she said. “It’s kind of crazy to think about this school … being so successful, it’s almost kind of normal.”

Next step: Signed to play volleyball at San Diego State University (D1) where she will study business and finance.

Senior-year highlights: Voted 1A Northeast League player of the year in volleyball at right-side hitter. It was also the first season she never came off the floor, and was among team leaders in kills, blocks, digs and service aces. Team did not drop a set all season (36-0), winning the district crown. … After initially deciding to not play (and be a team manager) basketball, she turned out after the season started – and averaged 5.5 points per game. Scotties defeated Deer Park for district title. … Voted all-1A Northeast first team in her debut year in girls tennis, and was part of a district runner-up doubles squad.

Career accomplishments: Participated in six state tournaments – three apiece in volleyball and basketball. Scotties recorded four state finishes – with overall top finish of third place in the 1A state girls basketball tournament in 2020. Freeman had state finishes of eighth (2017), sixth (2018) and fourth (2019) in the 1A volleyball championships. Was also part of two state academic championships. … Four-time letter winner in volleyball, she was voted to the 1A Northeast first team her final three seasons. Also an honorable mention pick to the 1A all-tournament team as a junior in 2019. … Four-time letter winner in basketball at forward, and received all-1A Northeast first-team honors as a sophomore and junior. Broke grandfather’s 50-year-old single-season school record for blocked shots, boy or girl, with 97, set in 2020. Also voted to the all-1A tournament first team as a junior, as well as being selected as a WIAA athlete of the week. SBLive WA also listed her as 1A player of the year candidate heading into her senior season (2020-21). … Played three seasons of varsity girls golf, advancing to the district tournament. … Played one season of varsity girls tennis as a senior. … Volleyball club program is T3 Volleyball out of Idaho.

School/community achievements: Co-valedictorian with a 4.0 GPA; National Honor Society member all four years; Future Farmers of America (FFA) officer at Freeman for two years; elected student-body secretary as a senior in 2020-21; honored with the “Fitz” overcoming-long-odds award in 2019 at the Spokane Youth Sports Awards banquet, Chase Youth Community community service award in 2018 , and also the PACE School of Character award for her school in 2017; official “Bloomsday” road-running race starter in 2018.