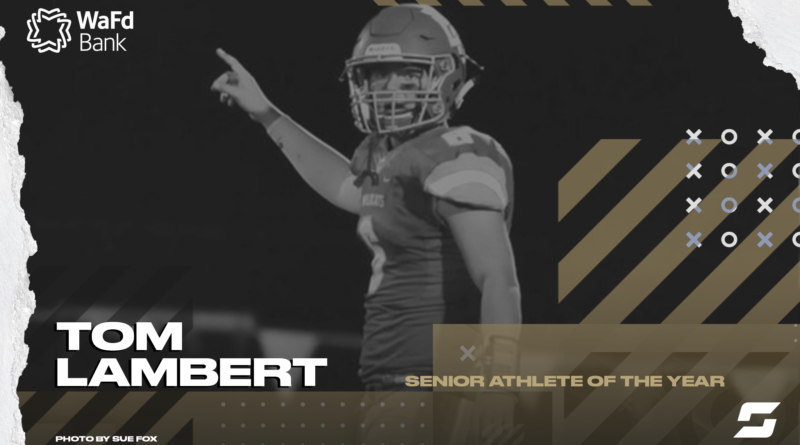 Tom Lambert may as well have been La Center’s mascot.

Don’t put it past him, he could have, if he wasn’t already a standout athlete — one of the more decorated the school’s seen in recent memory.

It isn’t just Lambert’s involvement as a student that stands out, it’s also his investment and upbeat attitude, participating in so much of what high school had to offer.

When it came to investing in the high school experience, you’d be hard-pressed to find an example that shone brighter than Lambert, SBLive’s 2020-21 1A Senior Athlete of the Year.

If Lambert could do it, while having fun and learning something new, he was going to at least try.

“If you ask anyone, I’m a very positive person,” he said. “And if I do something, I’m going to go all out for it. And that’s what I did.”

When he wasn’t starring as La Center’s quarterback and linebacker for the last three years, or on the mound as a key piece of the Wildcats’ prolific three-pitcher rotation, you could count on seeing him in the front of the student section, whooping and hollering at basketball games.

Or as the president of the science club.

Or in Future Business Leaders of America.

He secured his second consecutive league MVP honor, leading the Wildcats to a 1A Trico League football title this spring which they cemented in a dramatic win against league rival Castle Rock.

And he had a stellar first team all-league-worthy baseball season as an outfielder and pitcher, racking up 28 strikeouts in 27 innings with a 1.04 ERA to help the Wildcats topple King’s Way Christian to earn its first district title.

When Lambert’s senior football season was delayed due to the pandemic, he had to navigate his own recruitment and try to find a home for himself at the college level.

But he also held out hope he’d be able to play one last season, no matter the length, with his teammates, many of whom he’d grown up playing with.

He’s grateful he did, and that emotion shined through in the final moments of the Wildcats’ 26-6 league title-clinching win over Castle Rock, his final high school football game.

As he lined up on defense alongside his close friends, fellow seniors Micah Adams and Braiden Wrigley, the three realized it would be their last time lining up on the field together. So all three embraced, and held on tight, grasping each other, as well as the moment.

When the final horn sounded, Lambert tearfully hugged La Center coach John Lambert, his dad and coach for as long as he can remember.

Lambert walks away from his time at La Center with memories, a long list of accolades, a spot on a college football team — and a big heap of appreciation.

“You can always look back and think ‘I could have done this or that,’ ” Lambert said. “I want to look at it like ‘I did what I did, I’m proud of what I did, and I don’t have any regrets.”

Next step: Lambert accepted a preferred walk-on spot on Portland State’s football team, where he’ll play linebacker under coach Bruce Barnum. He’s going to study education and wants to one day teach physical education and coach football, like his father.

Senior-year highlights: He won his second consecutive 1A Trico League MVP honor, leading the Wildcats to a league title. He also starred as a pitcher and outfielder for La Center’s baseball team, racking up 28 strikeouts in 27 innings with a 1.04 ERA to help the Wildcats win their first district title.