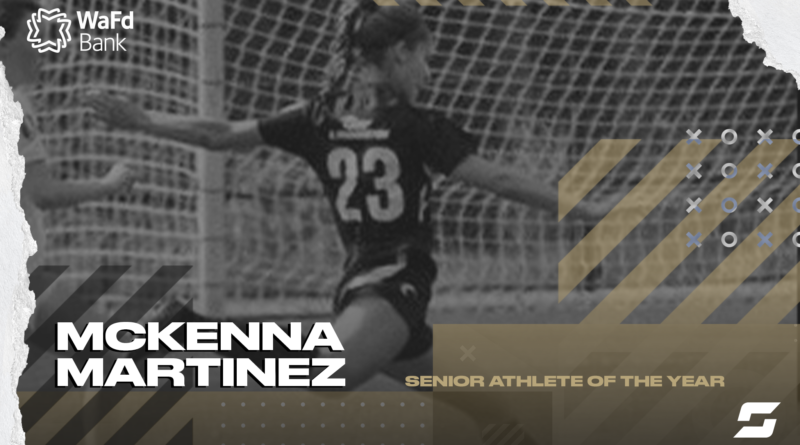 The condensed WIAA sports season was hectic for many athletes balancing more than one sport.

And it’s been even crazier for McKenna Martinez, a Tri-Cities Prep standout headed off to play soccer at Oregon State University in the fall.

Because soccer is not offered at her school, Martinez played for Richland High School the past four seasons. Had she not broken her toe as a ninth grader, she likely would have been an all-Mid-Columbia Conference first-team selection her entire career.

“She’s been the most dangerous player in the league since she was a freshman,” Richland girls coach Justin Almquist said.

That isn’t the manic-scheduling part: During the six weeks of spring basketball, Martinez also trained daily at 8 a.m. with college soccer standouts, then went off to Tri-Cities Prep practices and games in the afternoon or evening.

Oh yeah, she also had school work to finish up.

“It was just eat and go to bed,” Martinez said.

The all-state soccer standout – and dual-league MVP in two sports as a senior – is SBLive’s Class 2B Senior Female Athlete of the Year.

Those who know her, and coach her, rave about not only her aggressive playing nature, but extraordinary foot skill.

“It’s come from a lot of practice on my own – cone drills and things like that,” Martinez said.

Some of it also comes from good athletic genes. Her father, Jason, was a standout football player at Richland – and was her first soccer coach. Her mother, Laura, played basketball at Connell.

Almquist lauded his standout forward’s will to win.

“Her competitiveness … she keeps at medium on the burner most of the time,” Almquist said. “Once game time hits, especially against bigger opponents, she went to boil right away.

“She loves to compete.”

Next step: Signed to play soccer at Oregon State University (D1) where she will also study kinesiology.

Senior-year highlights: Voted 4A/3A Mid-Columbia Conference player of the year at Richland High School, scoring 15 goals and adding 13 assists at forward for the league champions. Also, named a WIAA athlete of the week this spring for soccer (Week 6). … In basketball, Tri-Cities Prep’s returning all-state point guard was voted the 2B Eastern Washington Athletic Conference MVP for a second consecutive season, averaging 16.9 points per game for the undefeated Jaguars. She also made the all-tournament team at the “unofficial” 2B tournament in Mount Vernon.

Career accomplishments: Participated in three state tournaments – two in basketball at Tri-Cities Prep (1B) and one in soccer at Richland (4A). Tri-Cities Pre won the state title in 2018-19 in McKenna’s first season with the team. … Finished with 70 goals and 38 assists in her four soccer seasons at Richland. Was a four-year starter and letter winner – and named to the all-MCC first team three times (2018-21), and the all-league second team as a ninth grader (2017). Selected to the Washington State Soccer Coaches Association all-state team in 2019 as a junior. … Finished with 913 points in her three basketball seasons at Tri-Cities Prep, and set the single-game 2B record for steals (14) in 2019. Named to the 2B EWAC first team all three seasons, and was player of the year as a junior and senior. SBLive WA selected Martinez as a 2B all-state guard in 2019-20. … Previously played club soccer for ASE G01 Emerald, and is now with Eastern Washington Surf GA. … Also an an avid tennis player.