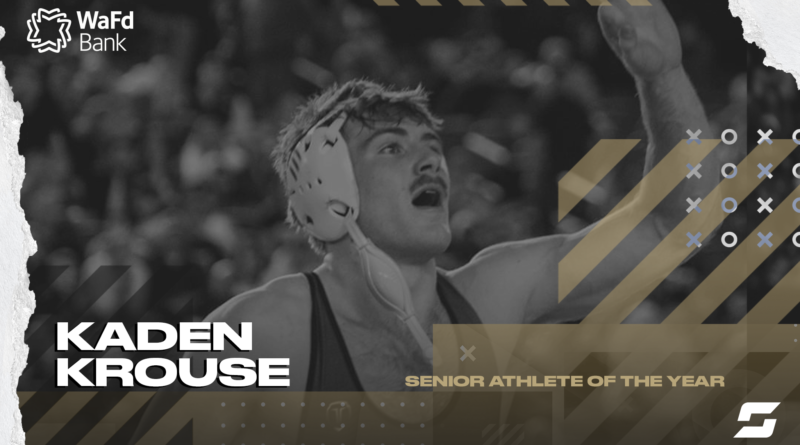 Kim Hogan makes no bones about his confidence in Kaden Krouse, the wrestler.

The Chewelah High School wrestling coach is convinced Krouse would have four-peated as a 2B state champion, had the 2021 Mat Classic not been squeezed out of the pandemic-condensed schedule.

“I’m very confident he would have won another,” Hogan said. “I’ve been around wrestling for 35 years and never seen a kid win three state titles and lose his fourth.”

Hogan is also quick to endorse Krouse the football player and the thrower, in addition to Krouse the person, the leader. It’s the Chewelah three-sport standout’s athletic prowess, as well as his natural leadership instincts, that make him SBLive’s 2B Senior Athlete of the Year for the 2020-21 school year.

As a junior, Krouse was named Associated Press all-state honorable mention as a linebacker after leading the Cougars to the 2B state quarterfinals. In the winter, he won the 170-pound wrestling title for 2B/1B to notch the three-peat.

His goal entering high school was to four-peat, and though that opportunity was taken away from him, he’ll walk away with the next best thing: another district title, the pinnacle of achievement in spring 2021.

He’ll also leave with fond memories of his senior year, one capped by a miraculous momentum-turning 100-yard interception return that fueled Chewelah’s epic comeback win over Colfax in March.

“That was pretty awesome,” Krouse said, chuckling. “The crowd was wild … it was really nice to have the whole town there. It was a huge crowd.

“It was definitely a fun year, for what we had.”

In Krouse, Hogan sees a unique competitor and a respectful, calm leader whose influence on his teammates supersedes the sport. Krouse knows just how to dial up his personality and excitement at the right times in the heat of competition.

“He’s a great leader,” Hogan said. “There isn’t anybody who’s going to work harder than him. He’s a very impressive natural athlete, but he’s also real coachable, a good thinker, and a good example for our other kids.

“He’s going to be missed in our school in a lot of different ways.”

Senior-year highlights: Led the Cougars to a 5-0 football record and won his fourth district wrestling title.

Next step: Krouse will be attending North Idaho College, where he’ll compete on the wrestling team and study engineering. First, he’ll be working as a salmon fisherman in Alaska for the summer.