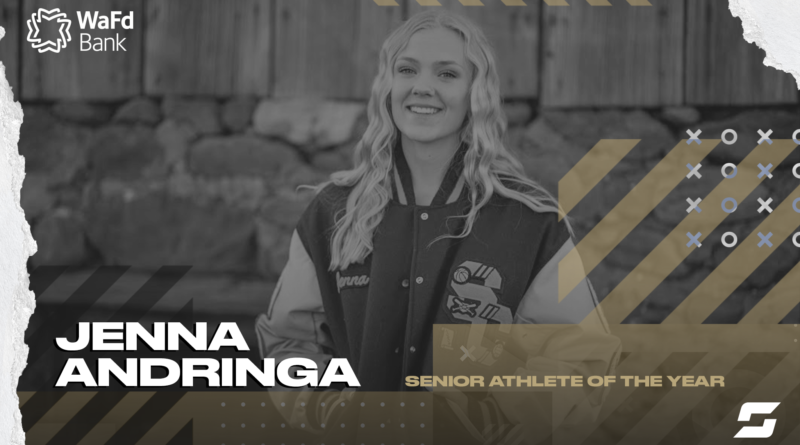 At Sunnyside Christian’s high school graduation a couple of weeks ago, co-valedictorians and sports’ teammates Jenna Andringa and Sydney Banks delivered a theme-based speech to their outgoing classmates.

“It revolved around all of the hard things we’ve been through,” Andringa said.

And it served as a personal reminder to Andringa all the things she overcame to become the school’s clear-cut top basketball player – and SBLive’s Class 1B Senior Female Athlete of the Year.

“She made it her personal mission that she would do everything in her power so we’d have a successful season as a group,” Sunnyside Christian girls basketball coach Brian Bosma said.

It all started more than a year ago. The Knights were coming off a fourth-place finish at the 1B state tournament in 2019. Expectations were high for a deeper postseason run in 2020.

But Andringa’s right knee began aching, even before her junior season started.

“I was told by a certain doctor not to play at all,” Andringa said. “I played because I thought we’d make it pretty far. But we didn’t get near to where we wanted to be. It was pretty heartbreaking.”

After her junior season, she had arthroscopic knee surgery in May – and not only faced a long recovery, but she wasn’t even certain there would be a senior year of athletics because of the COVID-19 pandemic.

But Andringa found an ally: the weight room.

“That helped me get over being upset and all the frustration with COVID,” Andringa said. “Lifting weights helped my mood.”

And, not by accident, it made the California native a more explosive athlete.

After spending her first three seasons playing near the basket, Andringa moved out to guard as a senior.

“This year, she really understood where she had advantages (on the floor),” Bosma said. “She was reading things herself. She is a great 3-point shooter … and showed incredible efficiency. She had a fantastic year.”

Next step: Signed to play basketball at Dordt University (NAIA) in Iowa where she will also study pre-veterinary medicine.

Senior-year highlights: Was the 1B Southeast’s top scorer (and likely MVP had voting been held) in basketball, averaging 23.1 points per game in leading the Knights to an undefeated spring season. She scored a career-high 31 points in a victory over Yakama Tribal. Also named a WIAA athlete of the week in Week 1. … In volleyball, was voted a 1B Southeast first-teamer as a middle blocker.

Career accomplishments: Participated in four 2B state tournaments in basketball (two), volleyball (one) and softball (one). The school’s deepest runs came in girls basketball, placing third in 2017-18, and fourth a year later. … Finished with 1,023 career points, and was not only a four-time letter winner in basketball – she was a four-year starter. She has been a three-time, all-1B Southeast selection since her sophomore season. Also selected all-state honorable mention in 2018-19 as a sophomore. … Earned three varsity letters in volleyball, and was voted to the 1B Southeast first team during her final two seasons. … Pitched and played both corner outfield spots during her ninth grade and sophomore seasons. … Played golf in middle school.