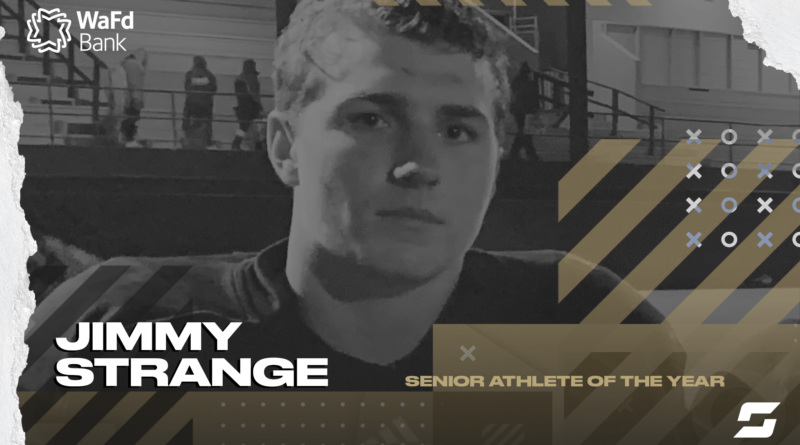 Eaton wrote: “You’re one of the greatest I ever coached in 32 years.”

Strange, a three-sport standout, was an all-league selection in football, basketball and baseball for all four years of his high school career.

“In my 31 years in high school athletics there have been very few athletes like him,” Naselle athletic director Brian Macy said.

In a condensed, shortened, and even overlapping three-season 2021 sports year, Strange led the Comets to a 6-0 football record, a 1B Pacific League baseball title and a 15-1 basketball record, garnering first team all-league honors.

“You never knew when it was going to be your last game with this COVID thing,” Strange said, “so I just left it all out there.”

And before all of that, in September, he and a group of Comet athletes trekked up to the state capitol in Olympia to advocate for the return of high school sports at a time when they were shut down due to the pandemic.

All considered, he’ll perhaps be remembered most at Naselle for his accomplishments on the football field.

As a sophomore, he moved from running back to lineman when the Comets didn’t have enough big bodies up front. He moved back into the backfield during the team’s 1B state semifinal run and scored several long-haul touchdowns.

And he fought through injuries all season to lead the team to the 1B state championship game in 2019.

In addition to his on-field accolades as a hard-to-bring down running back and outstanding middle linebacker, his presence and leadership commanded the locker room.

“I don’t think he missed a practice,” Eaton said. “He’s everything you want. Took control of the huddle when things got bad.”

Putting on a Comets uniform runs in the Strange family. Jimmy’s younger brother, Joey, just finished his junior year. Eaton, who retired this spring after 32 years with the program (28 as the head coach), also coached Jimmy’s dad, Cody Strange, a 1996 Naselle graduate.

Career accomplishments: Strange was an all-league selection in football, basketball and baseball for all four years of his high school career.

Next step: Strange will be studying forestry at Washington State in the fall. Now, he’s off the grid for five weeks, gill-netting salmon in Naknek, Alaska for his summer job.

MORE: JENNA ANDRINGA IS SBLIVE’S 1B SENIOR FEMALE ATHLETE OF THE YEAR