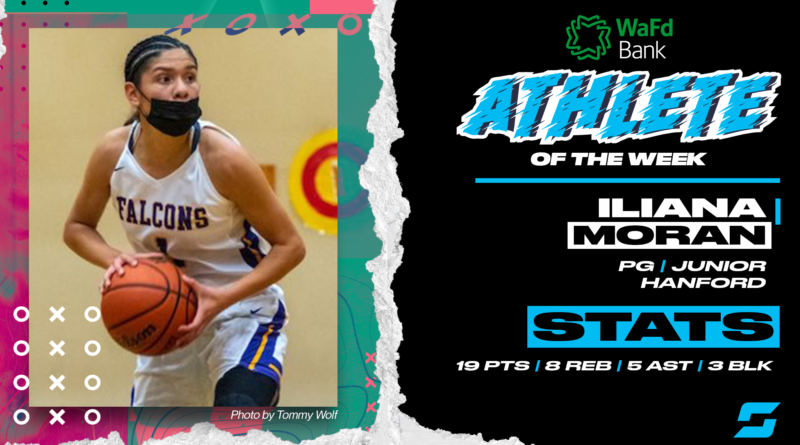 The junior finished with 19 points, 8 rebounds, 5 assists, and 3 blocks in Hanford’s road win over Richland.

John Barbee Jr., Franklin-Pierce basketball: He’s on a tear! The guard scored 37 points in a 2A SPSL title win over White River.

Tyler Bilodeau, Kamiakin basketball: Continued his breakout season with 18 points, 11 boards in a win over Pasco, then 27 (on 11 of 16 shooting) and 11 in a win over Hanford.

Jansi Merz, Wahkiakum girls basketball: The post player led the Mules to a district title over Toledo with a game-high 21 points.

Tamia Stricklin, Seattle Prep girls basketball: Who else? The senior led all scorers with 29 points and added 14 rebounds as the Panthers held off Bishop Blanchet for the Metro League title. She had 35 points and a school-record 18 rebounds in the league semifinal win over Garfield.

Tyson Degenhart, Mt. Spokane basketball: Scored 33 points in a win over Mead, then 23 in a win over Ferris to keep the Wildcats in the lead chasing the GSL playoff title.

Ava Erhardt, Cedarcrest girls basketball: In her final game, the senior scored a game-high 22 points in an overtime upset of Lake Stevens.

Luke Holcomb, Puyallup basketball: Went for 27 points and 16 boards in a win over South Kitsap — the accomplished Vikings athlete’s final game of his high school career.

Kendall Wallace, Clarkston girls basketball: Kendall had a game-high 26 points in a win over Pullman.

Ella Borsheim, Bellarmine Prep track and field: The junior distance-running standout became the fourth-fastest junior all-time in Washington with her 4:45.63 time in the mile at the Running Lane Championships.

Kristol Ayson, Lincoln of Tacoma girls basketball: The Abes’ leading scorer helped the Abes erase a halftime deficit by scoring 12 of her game-high 20 points in the third quarter to lead Lincoln past Bonney Lake in the 3A PCL title game.

Trista Hull, La Salle girls basketball: In her final game, the Boise State signee had 19 points and 20 rebounds to lead the Lightning to a district title over Zillah.

Jackson Dorsey, Wilson basketball: We know he can dunk. The flying forward also scored 17 points and grabbed 10 boards in a win over Spanaway Lake.

Gillyan Landis, West Valley of Yakima girls basketball: The post player paced the Rams with 28 points – 20 coming in the first half – and 14 rebounds in a win over Wenatchee.

Keira Marsh, Arlington girls basketball: The junior guard erupted for 26 points – 24 in the first three quarters – as the Eagles pounded Snohomish in Wesco action. Marsh connected on three 3-pointers, and was 11 of 17 from the floor.

Will Pohland, King’s basketball: Drilled a half court shot at the buzzer to beat rival Seattle Academy, 59-57, on Wednesday night.

Kade Smith, Chiawana basketball: Came off the bench to score a career-high 28 points in a 84-88 loss to Walla Walla.