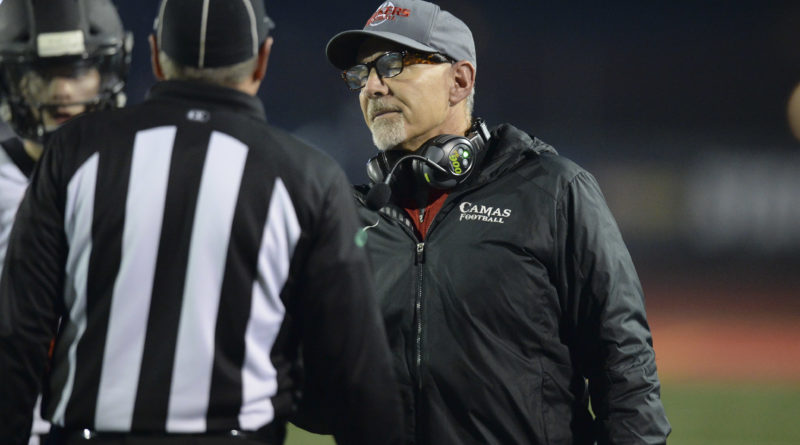 CAMAS, Wash. — When Jon Eagle received a call from Bruce Barnum asking to meet up and talk about a job opportunity, he was thrilled, though admittedly a little surprised.

Barnum didn’t want to meet the longtime Camas High School football coach at his office, his house, a coffee shop, or even a football field. His preferred destination was hyper-specific.

“We met at a park, which I thought was kind of odd,” Eagle said.

It was Monday, June 7 at Camas’ Lacamas Park when Barnum backed his pickup truck onto a boat ramp, pulled his tailgate down and the two plopped down on the back.

Eagle showed up expecting a job interview. He brought a stack of books and binders. But Barnum, the head football coach at Portland State, was ready to offer him the job as an offensive assistant coach on his staff at the NCAA Division I FCS program.

Eagle, who built Camas into a Washington high school football powerhouse as head coach for the last 13 years and has coached at the high school level for more than 30 years, was prepared to accept the offer on the spot. And he did.

With it, though, Barnum wanted to add a personal touch — one that would take Eagle by complete surprise.

Coffee in hand, the two sat on the tailgate and Barnum started in.

Eagle, 61, has built a reputation as a level-headed leader who can dissect a defense with precision.

And he’s won games — a lot of them. Over 13 years as the Papermakers’ head coach, he amassed a 127-22 record (85.2 winning percentage), nine league titles, five state semifinal appearances and two WIAA 4A state championships.

The resumé on paper was a sweetener to Barnum, who grew to know Eagle as a sharp football mind through years of one-on-one conversations.

“Everybody grades guys by what level they’re at, like this guy must be smart because he’s in the SEC and you’re in the GSHL,” Barnum said. “But Jon’s a helluva coach.”

Eagle, whose previous head coaching stints were at Evergreen of Vancouver and Redmond, had thought about making a jump to the college ranks over his more than 30-year high school coaching career. But the opportunity always ended up being put on hold.

Barnum first contacted him about the job in March 2020. But an official offer was placed in limbo when the coronavirus pandemic sent the world into lockdown, and the Portland State program into a hiring freeze.

At that point, Eagle had already told his assistant coaches and family he was ready to take the job.

The sports world — college and high school alike — recoiled as the pandemic bore on. That put the prospective offer on the back burner, and as high school football slowly returned in Washington, Eagle compartmentalized the opportunity and snapped back into leading his program through a pandemic. After all, the Papermakers were defending WIAA 4A state champions and winners of two of the last four state titles.

He’d check back in with Barnum from time to time, and for awhile, nothing changed. Every so often Eagle’s wife, or one of his kids, would ask him if he’d heard anything new from the Big Sky school down the road. He’d tell them no.

His dream was on hold.

Back in 2020, when Eagle first got the call inquiring about the job, he’d made up his mind that he wouldn’t hesitate to give an answer if Barnum were to make an official offer. He didn’t want to spend any time mulling it over. When — or rather, if — it came, he’d trust his gut.

“[Barnum] called and I said, ‘I’ll start tomorrow. What time do you want me there?’ I said, ‘I’m ready to roll,’ with no hesitation whatsoever. I wanted to be that guy, and 15 months later, we’re here.”

That opportunity would present itself again on June 7, sitting in the bed of Barnum’s pickup truck.

Eagle agreed, and by that afternoon, he gave a tearful goodbye to his Camas team on the first day of spring practice. By evening, the school’s athletic department sent out a press release announcing his departure. Coordinator Jack Hathaway was named interim head coach for the 2021-22 season.

Still, it was a difficult decision to leave a program he built into one of the best in the state. He had formed a tight bond with his players and coaches and was embraced by the Camas community. Leaving that, he said, is the hardest part.

“Why would you walk away from something that positive?” Eagle said.

Barnum and Eagle aren’t lifelong friends as much as they are like-minded football coaches with a lot of shared history.

They graduated from Columbia River High School five years apart, but never knew one another personally.

When Barnum was in high school, he got wind that Eagle joined University of Oregon’s staff as a graduate assistant from 1985-86 under coach Rich Brooks. It was the first Barnum had ever heard of anyone he knew gaining legitimate employment coaching college football, let alone a Columbia River graduate. College football was just something he watched on TV — religiously.

Years later, Barnum found his own success in the college ranks, winding through Western Washington, to the East Coast, then to Portland State as the offensive coordinator under Nigel Burton.

That’s when he and Eagle reconnected.

Eagle would go out and watch practice to learn new concepts from the college staff and when Barnum was promoted to head coach in 2015, Eagle’s visits to practice became more frequent. Through conversations, and witnessing Eagle borrow ideas from his Vikings, Barnum learned over time how much care Eagle placed in his job.

“I open the doors to anybody and he showed up the most,” Barnum said. “And it wasn’t because he wanted a job.”

The promotion to PSU’s head coach afforded Barnum the chance to move back to his native Vancouver. His sons played at Camas’ 4A Greater St. Helen’s League rival Skyview, the older Brody Barnum a quarterback, and Cooper Barnum a wide receiver/defensive back. That proximity allowed Barnum plenty of time to watch Eagle’s offenses pick apart and stay one step ahead of opposing defenses.

Skyview coach Steve Kizer has built a consistent winning program, but hasn’t beat Camas since 2011. Neither Barnum boy — who both now play baseball at Washington State — ever beat the Papermakers on the football field.

“Damn right, that’s what made it easy,” Barnum said. “He’s a football mind. He’s showed it with the wins at Camas, the program he built, the state championships.”

Barnum had four spots to fill on his staff during the quick offseason turnaround to 2021-22. Brody and Cooper Barnum, his sons, were two of the first people Bruce told about his plan to hire Eagle.

“I said ‘I think I’m gonna make a run at Jon Eagle,’ ” Barnum said, “and Brody’s flipping out. ‘Dad, you’re going to turn Southwest Washington upside down. No, no, no. Don’t do that.’ Then Cooper’s like ‘yeah, well done, pops. See if you can get him.’ “

There was a purpose behind the setting in which Barnum offered Eagle the job on June 7 at Lacamas Park.

More than 40 years ago, when Barnum was a student at Columbia River High School, Eagle’s father, John Eagle, operated a Christmas tree farm. Every year around the holidays, he needed helping hands.

“My dad would always hire a high school kid, a local kid, and that was usually a Columbia River kid,” Eagle said.

Barnum was a seasonal employee for John Eagle for four winters — each of the years he was in high school. He would do the grunt work, like cutting down trees, lugging them back to families’ cars. John Eagle was a fixture in Vancouver as a high school track coach and wrestling official. He was also the brains behind the tree farm operation, the salesman.

Bruce was the same age as Jon Eagle’s younger sister, and he developed a deep level of appreciation for their father, the longtime track coach at Fort Vancouver who was inducted into the Washington high school coaches association hall of fame in 1995.

“I just loved his old man,” Barnum said. “I saw the humorous side of him … and I was the bull, you know, I’d go out and cut the tree and he’d be yakking. And he talked faster than anyone you’ve ever met.”

He’ll always remember John Eagle’s big heart, recalling a time when he gave a mother and her kids a tree for free, and the mother broke down crying.

And he’ll never forget how the legendary track coach hired him.

He describes “sitting on a wet-ass dirty, pine-needly tailgate with his pops, shooting the bull, he was slapping me upside the head, asking me if I want a job and offered it to me,” Barnum said. “So I thought I’d pull it off that way.”

Barnum’s hiring took place on the bank of the Columbia River, but he chose to hire Eagle near his house, at Lacamas Park, coincidentally where Barnum used to fish growing up.

“The boat ramp just brought history to me from back when I was a kid, the history with his dad,” Barnum said.

“When I threw the tailgate down, he kind of looked at me funny, and I went ‘well, let’s just sit here for awhile.’ ”

Barnum bought him coffee and the two sat and talked for an hour.

Eagle knew Barnum had worked for his father, who died in 2004, but he didn’t know the entire backstory of his hiring until that moment.

For Eagle, the meaning behind Barnum’s personal touch didn’t fully hit him until later that day.

“It’s pretty special,” Eagle. “In the moment, I wasn’t quite grasping it, but the more I thought of how he thought it up, I thought it was a pretty neat thing.”