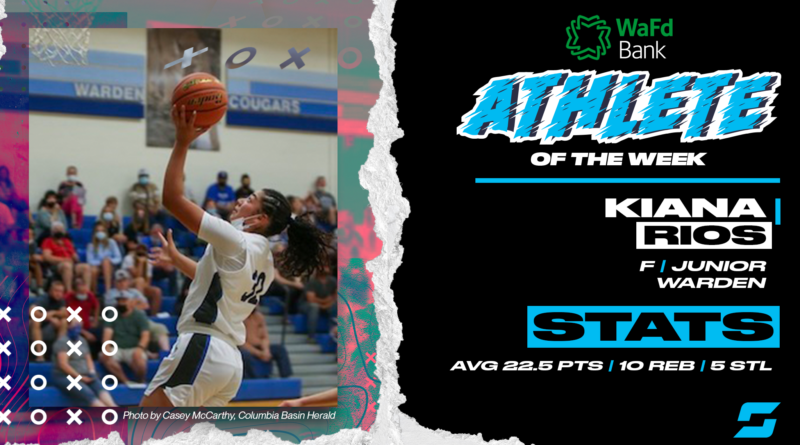 The junior averaged 22.5 points, 10 rebounds, and 5 steals for Warden in games played against Moses Lake and Cashmere.

Rios received 38.12% of the vote, beating out Battle Ground’s Candice Adams who finished second with 26.25%. Liberty of Spangle’s Teagan Colvin finished third with 13.82% and Lake Stevens’ Camille Jentzsch finished fourth with 6.86%. There were over 32,000 votes tallied this week!

Candice Adams, Battle Ground softball: The ninth grader had three hits, including a home run, and three RBI in the GSHL tournament semifinals against Prairie, then scored two runs as the Tigers completed an unbeaten season with a win over Mountain View in the championship game, writes the Columbian.

Tyson Degenhart, Mt. Spokane basketball: Scored 27 points — more than half of his team’s point total — to lead the Wildcats to a 52-48 win over Gonzaga Prep, after scoring 28 points in a win over University.

Teagan Colvin, Liberty of Spangle girls basketball: The ninth grade point guard poured in a game-high 23 points in a win over St. George’s.

Katelynn Forner, Camas girls basketball: The senior guard made five of the team’s 17 3-pointers in the 4A GSHL championship game, and finished with a game-high 15 points in a win over Union.

Luke Navarre, Zillah basketball: Sophomore scored 34 points in a comfortable win over La Salle, then 24 points in a rivalry win over Toppenish to clinch the SCAC regular season title outright.

Atreonia Garner, Spanaway Lake girls basketball: The Sentinels top scorer matched her season-high with 30 points and 10 rebounds in a loss to Lakes. She also tallied 21 points against Mount Tahoma.

Kassy Garza, Zillah girls basketball: The junior point guard tallied a career-high 27 points (18 in the fourth quarter and overtime) in a win over Prosser, and then had a game-high 22 points in a win at Toppenish, writes the Yakima Herald-Republic.

Hope Hassman, Tahoma girls basketball: The sophomore continued her run of 20-point scoring games with 27 points against Kentridge, and 25 points against co-4A NPSL favorite Kentwood, both victories. She sank five 3-pointers against the Conks and added eight rebounds.

Clay Delp, Zillah basketball: Scored 17 of his 32 points in the final 11 minutes to lead the Leopards to an SCAC rivalry win over Toppenish.

Heidi Impola, Grace Academy girls basketball: The junior wing player has been lighting defenses up with her scoring. Last week, she had 28 points against Lummi, 26 points against Shoreline Christian and 15 points against Tulalip Heritage.

Andie Zylak, Lewis & Clark girls basketball: The senior point guard contributed nine of her game-high 15 points in the fourth quarter, including a decisive three-point play with less than two minutes remaining, as the Tigers maintained a share of the GSL lead with a road win over Mead.

Noah Pepper, Selah basketball: Passed the 1,000 career rebound mark while scoring 25 points and pulled down 10 rebounds in a win over Ellensburg, then followed it up with a 37-point, 14-rebound outing in a win over Prosser.