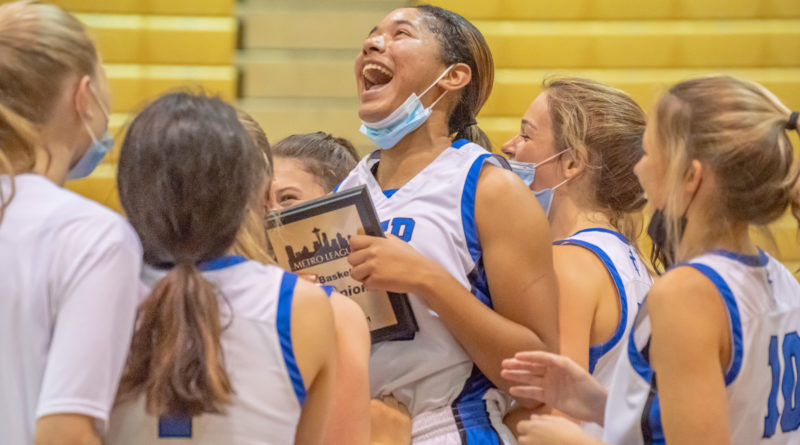 And then she shifted that motor into overdrive one final time.

Stricklin tallied a game-high 29 points, including seven in the final 4:21, as the top-seeded Panthers held off the Braves, 54-48, on Friday night for their first Metro League girls basketball championship since 2001.

Gabby Stuart added 15 points in the victory at Seattle Pacific University as the Panthers capped a 13-0 season.

“To finish off like this, I could not ask for anything more,” Stricklin said.

“She left it all out there,” Braves girls coach John Augustavo said. “That’s all you can do.”

The Braves saw both extremes – holding an 11-point lead in the first quarter (15-4), then watching the Panthers storm back on a 24-5 run, capped by two Stuart 3-pointers, and another one by Stricklin, to close the first half.

Early in the second half, Seattle Prep built its biggest advantage – 37-22 – on Stricklin’s inside basket.

But with Stuart in foul trouble, and Clark leading the charge, the Braves sliced it to 47-45 with 2:58 remaining.

“We had some young kids who had their first big moment. They made some big plays, but were a little tight at times,” Seattle Prep girls coach Brian Elsner said. “Blanchet is really, really good. They improved a lot over the course of the year. They have a lot of talent.

“There was part of us that was just trying to survive.”

Stricklin, a Fresno State signee, was the difference maker, changing hands in mid-air on her runner basket in the lane. Then, she sank a lean-in floater, and the Panthers’ lead was up to 53-45 with 1:29 remaining. She scored her team’s final five points.

“I just feel blessed to coach her,” Elsner said. “She is just an awesome kid. She is an incredible player. And she wanted the ball in big moments.”