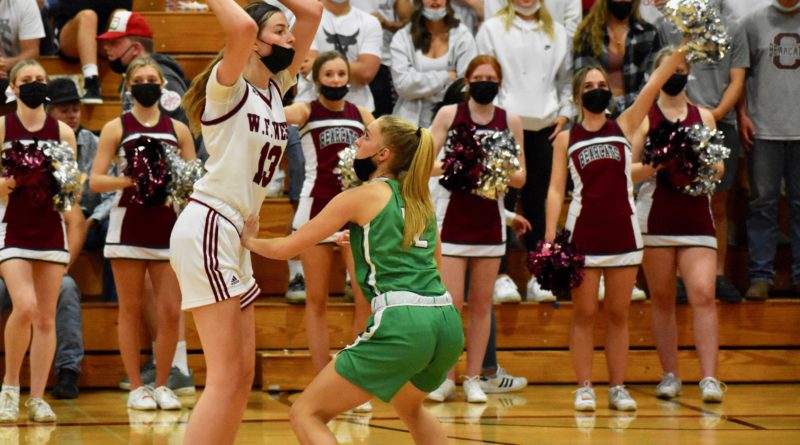 CHEHALIS – Robin Johnson admits she takes losses harder than the average coach – especially ones decided in the final seconds.

“They take a piece out of me,” the Tumwater High School girls basketball coach said.

Well, the Thunderbirds must have learned a valuable lesson from their heartbreaking 2A Evergreen Conference defeat to W.F. West nearly three weeks – because they never let the outcome Thursday night to be determined that deep into the game.

Fueled by python-squeezing defensive pressure, Tumwater rolled past the Bearcats, 58-31, to win the District 4 championship.

The Bearcats did not score a field goal in the final 13:21 of the game.

Here are three takeaways from the Tumwater-W.F. West game:

THE DEFENSE TUMWATER PLAYED WAS CLOSE TO TEXTBOOK PERFECT

Carlie Deskins’ last-second three-point play for the Bearcats won them the first meeting, 49-46.

Those are the sequences that eat at Johnson, who was as energetic and feisty as guard as you’d ever see play high school when she was at mid-1990s standout at Tenino High School.

“But they make my team better every single time … in the way we analyze it, and the way we react to it,” Johnson said.

In this condensed spring schedule, the Thunderbirds only have four practices all season, Johnson. So they talked a lot about mental edge, often coming up with code words for games.

For the district championship game Thursday?

The Bearcats are normally patient running their offense, often taking possessions right down to the wire. They are comfortable doing that.

And yet, Tumwater’s man-to-man pressure seemed to fluster them so badly, they began uncharacteristically flinging off wild shots.

Give special credit to Lund – a do-everything “heart and soul” junior, Johnson said, who has the ability to guard all positions. And then there was undersized post Cassie Kaufman, who at 5-foot-7, was the one primarily in charge of guarding the 6-2 Brumfield as far as 25 feet away from the basket.

W.F. West’s final field goal came on Brumfield’s putback that cut Tumwater’s lead to 28-24 at the 5:21 mark of the third quarter. Its final seven points were all from the free-throw line.

“(Lund and Kaufman) are two of the most important players we have,” Amendala said. “The little things they do are the difference if we win or lose.”

WHAT DO WE KNOW ABOUT THIS W.F. WEST TEAM MOVING FORWARD?

From a team that made the Class 2A championships in 2019-20, the Bearcats graduated a ton of primary contributors – especially scorers.

Second-year coach Kyle Karnofski knew he had one of the best players in the state returning in Brumfield. But how a new cast would play around her remained to be seen.

“We had a lot of question marks coming in,” Karnofski said. “And these girls all exceeded expectations.”

Indeed. The Bearcats’ only loss of the season came Thursday night – finishing the spring at 16-1. And next season, Brumfield will be a senior, and point guard Kyla McCallum is a promising talent who can really slash to the basket.

W.F. West does graduate Madi Mencke, a tireless worker on both ends of the floor. But this is easily a preseason top-10 team in 2A starting in 2021-22.

“I like what we have,” Karnofski said. “And I feel we can built off this.”

SHOULD TUMWATER BE NEXT SEASON’S PRESEASON NO. 1 TEAM IN 2A?

Coming into this year, SBLive WA had Ellensburg as its top 2A squad – and the Bulldogs will be serious factors moving forward, especially with Dylan Philip and Olivia Anderson returning.

Hudson’s Bay looms in Vancouver. Never forget about Lynden. And Clarkston always seems to find itself a deep-playoff threat.

But with Sumrok’s presence near the hoop, and the way Amendala controls the floor and shoots the 3-pointer, Tumwater has a pair of legitimate all-state candidates.

Lund and Kaufman do a little bit of everything. And the Thunderbirds got a new addition from Olympia High School this spring in Kylie Waltermeyer, an athletic wing player and slasher who could emerge as the team’s most consistent No. 3 scorer next season.

Tumwater placed third at the state tournament in 2019-20. Johnson’s group wants a bigger piece of the pie next winter.