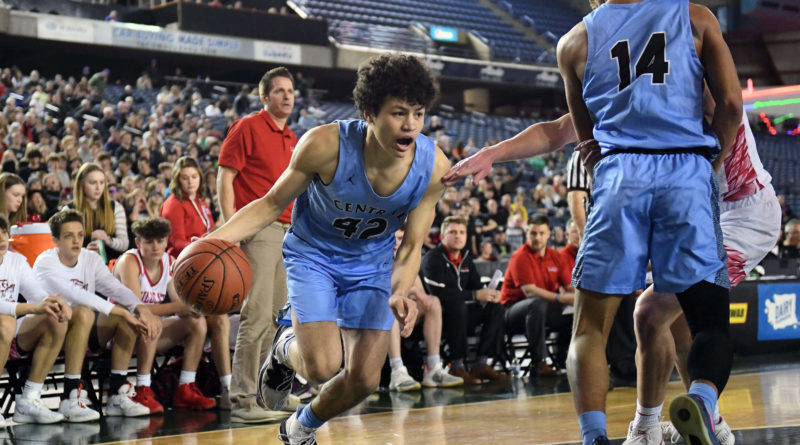 SPOKANE, Wash. — It was the middle of winter when Teagen Hoard fired off a video to a group chat with his Central Valley teammates.

He had finally logged his first in-game dunk at an out-of-state AAU tournament, which took place during what should have been his senior high school season, and he wanted his CV teammates to be the first to see his progress.

“I responded ‘that’s just lucky,’ ” senior center Gavin Gilstrap said. “Then next time I played with him, he had like three [dunks], so I was like, ‘OK, maybe that wasn’t just lucky, he might be doing that now.’ ”

The video wasn’t an aberration, but a feature of Hoard’s on-court transformation, going from JV swing player at the start of his junior season, to the most versatile player on maybe the top team in Class 4A. A guard not previously known for playing above the rim, Hoard was poised to take on a bigger role at CV, and wowed coaches and teammates by how much time he spent in the gym in the prolonged offseason.

“I shot every day,” Hoard said. “I just kept working in practice. Kept busting my butt. Earned my way up.”

For the 6-foot-10 Gilstrap, the offseason was mostly about getting his body right. He started at center and played a pivotal role in the Bears’ run to the 2020 4A state title game, and returned leaner, quicker and better conditioned. He’s averaging around 11.5 points and nine rebounds per game on 69 percent shooting this spring.

In a normal year, both would likely have their college picks made by now, days away from graduation. But after a pandemic-induced recruiting dead period, and the unusually high number of returning players on college rosters due to the NCAA granting all athletes an extra year of eligibility, they find themselves still weighing fewer options and, finally, getting the opportunity to show for the work they’ve put in.

It’s left a lot to prove in a shortened senior season.

For Hoard, who teammates joke “lives in the gym,” and Gilstrap, the spring is another opportunity to hopefully bolster their college prospects. Neither have seen the recruiting process play out like they’d hoped.

Gilstrap’s conversations with Division I coaches in recent months would start positively, but typically end up with the coaches telling him their rosters were full.

Despite setbacks, perceived or otherwise, they’re secure in their options, and feel like they’re just scratching the surface of their potential.

“Both of them have huge upside,” CV coach Mike Laws said. “They get in the right program, they’ll be great.”

Their senior high school season, which has been postponed, shortened, stretched past graduation and rid of the chance to compete for a desperately-sought gold ball, comes with one positive. They’re playing their final season in a CV uniform — a final run they’ve trained together for since March 2020, when they lost to Mount Si 58-47 in the 4A state championship game.

Their run to the 4A title game was built on suffocating team defense, air-tight ball movement, and togetherness. The offense didn’t center around one player, and left room for rotation players to step up at any given movement.

Led by many of the same players, including junior point guard Dylan Darling and senior guard/forward Lauren O’Neill, the Bears (8-1), appear poised to enter the Greater Spokane League playoffs next week — the pinnacle achievement in the COVID-condensed spring season — as the two seed behind Mt. Spokane.

Hoard’s junior year was marked by progress. He played his way into a rotation defensive specialist who could knock down a shot here and there, and by season’s end, he scored 13 points (a team high) in CV’s 4A state title loss.

Scoring on a big stage didn’t just send a message to others. It opened Hoard’s eyes, too, and showed him what he was capable of.

“It was also a huge confidence builder for us in him,” Laws said. “He backs down from nobody.”

Said Gilstrap: “The entire offseason [Hoard] was working on that, because I was with him for some of it. He really stepped into his role and got faster, stronger, more confident.”

Entering his senior year, he saw the opportunity in the offseason with key starters gone, particularly an opportunity to fill the scoring void left by departed senior Noah Sanders.

Hoard started working with former Gonzaga standout guard Eric McClellan, who spends parts of his offseason in Spokane training players when he’s not playing professional ball overseas. McClellan taught Hoard how to maximize his intensity in workouts, and helped him re-tool his body.

Now, he’s often guarding the opposing team’s best player and is leading the team in scoring, having sharpened his ability to create his own shot off of the dribble.

Gilstrap has worked on shooting range, even slowly incorporating a 3-point shot, which he did not have in the past. In a blowout win over Cheney on Saturday, his teammates drew up a pick and pop for him, and he drilled a 3 at the top of the key.

“People don’t think I can shoot, but I’ve been working on it,” he said.

In a year that has been anything but traditional, the Bears have maintained a desire to avenge their 4A state title loss and are focused on winning the next best thing: a GSL title.

“We wanted to prove we’re the best team in the GSL,” Hoard said. “It sucks we couldn’t go back to the Dome, but we’re proving some people wrong.”