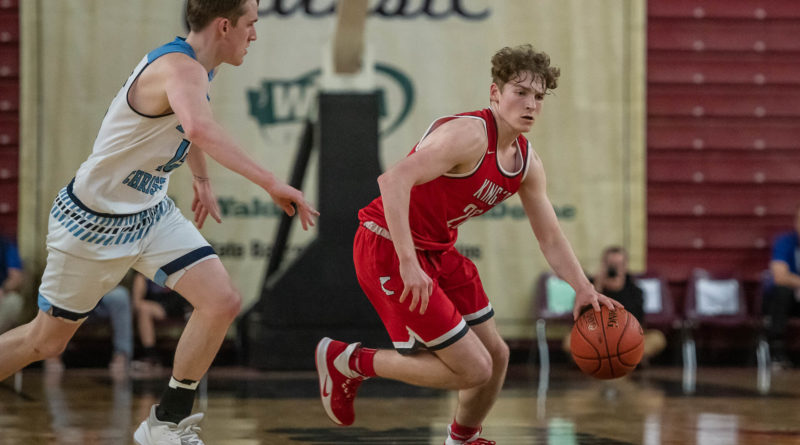 SEATTLE, Wash. — Will Pohland caught the ball near mid-court and saw 1.5 seconds on the clock, so he knew he had time to pull off a little late-game magic.

He shook a defender with a pump-fake and hoisted the shot from the logo, held his release and walked backward as the shot went in. The King’s senior’s half court shot at the buzzer lifted the Knights over league rival Seattle Academy on Wednesday night, 59-57.

“I’m going to be honest, and I know it sounds cliche, but I kind of knew it was going in the entire time,” Pohland said. “I just let it fly. As a basketball player, you just have that feeling like it was going to go in, and it did.”

With the win at Seattle Academy, the Knights (9-1, 7-1 1A Emerald City), the defending 1A state champs, avenge an early season loss to the Cardinals (10-1, 9-1) and draw even in a race for the top seed and home court advantage entering the district playoffs.

Leo DeBruhl hit two free throws to put the Cardinals up one with 3.2 seconds left, setting up a King’s baseline inbound. Knights senior Jordan Hansen threw an inbound pass to Carson Clowers, who skipped the ball to Pohland at mid-court to set up the final look.

It’s not the first game between these two teams to go down to the wire. In fact, late game mayhem seems like a feature when they play. In the 2020 1A state semifinals, DeBruhl hit a step-back 3 to force overtime — a game King’s ended up winning in overtime.

“We’ve been playing against Leo, Joe Cookson, all those guys since we were kids, so it’s one of those things like, alright, whose going to bring it today?” Pohland, a Puget Sound-bound 6-foot-3 combo guard, said.

“We know every single time we play them it’s going to be about effort, about stops, because we know we can both put up points when it matters.”

King’s coach Rick Skeen told his team on the bus to celebrate the win tonight, and get back to work tomorrow. But Pohland — and his teammates for that matter — will remember the shot for years to come.

“We’ve all hit big shots, but to hit a shot like that against (Seattle Academy), you don’t have that feeling, like, ever,” Pohland said. “And to have your team running out, the girls team’s cheering us on, people texting you after the game, it’s a feeling I’ll never forget. And shootout to my teammates, man, they worked hard, and we knew we had to get a stop.”