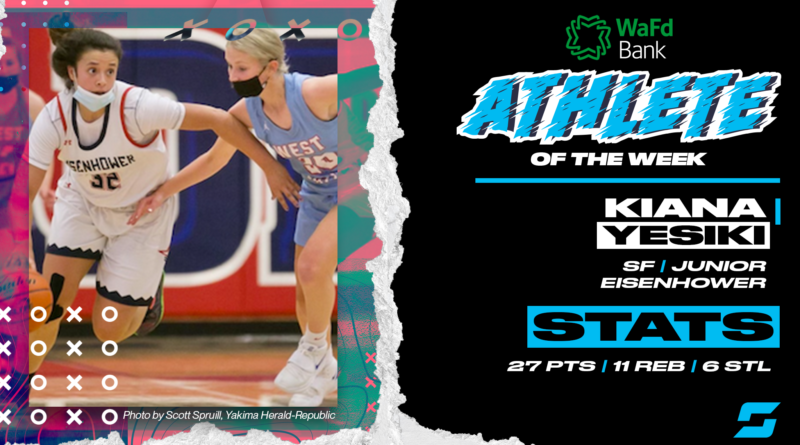 Congratulations to Eisenhower junior Kiana Yesiki for being voted SBLive’s WaFd Bank Washington High School Athlete of the Week for May 24-30!

The junior led the Cadets with a big night – 27 points, 11 rebounds and six steals – in a CBBN win over West Valley. She had 19 in a season-opening loss to perennial 4A powerhouse Moses Lake.

Yesiki received 53.78%  of the vote, beating out Hanford’s iliana Moran who finished second with 34.41%. Chiawana’s Kobe Young finished third with 5.36% and Lynden Christian’s Libby Stump finished fourth with 2.28%. There were over 23,000 votes tallied this week!

Asjon Anderson, Mount Tahoma basketball: Followed up a 44-point performance on May 21 by dropping 32 points in a win over Bonney Lake and another 30 to help beat Lakes.

Kyra Gardner, Raymond girls basketball: The junior do-everything guard continues to scorch defenses with her efficient scoring. She registered her third 30-point outing – 32 points on 13-of-18 shooting – in a win over North Beach. She made four 3-pointers in the game, and added six steals.

Colin Eversole, Kentlake basketball: Hit a go-ahead three-pointer at the buzzer at lift Kentlake over Kent Meridian on Friday.

Emilia Long, Port Angeles girls basketball: The senior point guard continues to dominate on both ends. She tallied a game-high 23 points – 14 coming in the first quarter – in the team’s win over Kingston. Earlier in the week, Long had 14 points, six steals, five assists and five rebounds in a victory over Central Kitsap, writes the Peninsula Daily News.

Jonas La Tour, North Kitsap basketball: Dropped 44 points and grabbed 20 rebounds in a blowout of Bremerton — all while with a sprained finger on his shooting hand. And wait until you hear what his teammate had in the same game.

Grace Geldien, Central Valley girls basketball: The senior post player led the Bears to three wins last week – leading off with a season-high 24 points (including three 3-pointers) and 10 rebounds in a 4A GSL win over Lewis & Clark. She added other double-double outings against University (14/13) and Mount Spokane (16/11).

Garrett Long, Wenatchee basketball: Scored 37 points and pulled down 12 boards in a win over Sunnyside.

Johny Olmsted, North Kitsap basketball: Scored 41 points and doled out 14 assists in a landslide win over previously undefeated Bremerton. He had 32 of those points in the second half on 14 of 15 shooting.

iliana Moran, Hanford girls basketball: The Falcons were able to get their first win over Chiawana High School in school history. iliana finished the game with 25 points, 5 rebounds, 5 steals, and 5 assists.

Kobe Young, Chiawana basketball: Scored 28 points and pulled down 11 boards — including five on the offensive end — in a five-point loss to red-hot Kamiakin, the slimmest margin of victory it has seen all season.

Carlie Deskins, W.F. West girls basketball: The ninth grade post player buried a three-point play with 1.2 seconds to go to send the Bearcats past Tumwater in a 2A Evergreen showdown of state powerhouses. Deskins banked in a short shot through traffic and was fouled for the game-winner to break a 46-46 tie.

Natalie Fraley, Kelso girls basketball: The junior guard set the pace with a game-high 34 points – 12 in the third quarter – in a 3A GSHL win over Heritage. Earlier in the week, she had 30 points and 16 rebounds in a win over Mountain View, writes the Vancouver Columbian.

Erika Glenn, Ilwaco girls basketball: The senior captain erupted for a game-high 35 points in a 2B Pacific victory over Onalaska. She had 34 points the night before in a victory over Napavine, writes the Centralia Chronicle.

Hope Hassmann, Tahoma girls basketball: The sophomore point guard exploded for 19 of her game-high 22 points in the second half as the Bears beat Rogers of Puyallup in matchup of respective league favorites. Hassmann tallied 14 of those points in the first 4:58 of the third quarter. She added games of 28 (vs. White River) and 29 (vs. Kennedy Catholic) later in the week.

Libby Stump, Lynden Christian girls basketball: The junior guard led all scorers with a game-high 23 points – seven coming in a decisive third quarter – as the Lyncs won the non-league showdown at La Salle in a matchup of 1A’s top two squads, writes the Lynden Tribune.

Katie Thiers, Roosevelt girls basketball: The senior center continues to show she is one of the best interior players in the state. She had 24 points and 12 rebounds in a Metro League victory over Ingraham, and tallied 20 points, 10 rebounds and seven blocked shots in a loss to undefeated Seattle Prep.