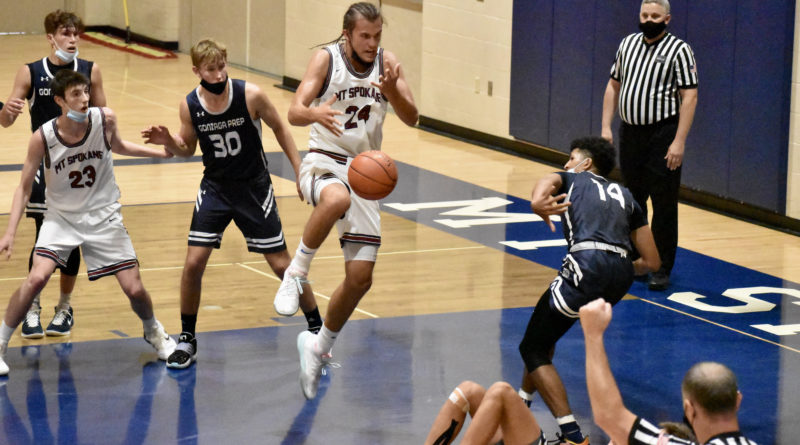 SPOKANE, Wash. — Tyson Degenhart looked at the opposing team’s point total at halftime and knew his team’s defensive effort couldn’t hold if it wanted to beat Gonzaga Prep for the second time in the same season.

“That’s too much for our defense, we just really needed to lock in,” the Boise State-bound senior said.

Degenhart scored a game-high 27 points to help Mt. Spokane to a 52-48 win. It was team defense that won the Wildcats (8-0) the game, keeping them on top of the Greater Spokane League standings with two games left in the regular season.

They held the Bullpups to six points in the third quarter, 11 in the fourth.

“I think it shows the versatility of our team,” Degenhart said. “We can bear down and play the defensive end and score a lot on the offensive end.”

Gonzaga Prep played an inspired game. Down its point guard and top scorer for the rest of the season, they scratched, clawed back and stayed within reach in the game’s final seconds, before Mt. Spokane held on.

“I was so proud of our guys,” Prep junior Jayden Stevens, who had the assignment of guarding Degenhart, said.

“Even though we didn’t get the win, I feel like we executed the way we wanted to.”

With eyes on a GSL title, Degenhart acted as the closer

Degenhart, and every high school senior in Washington wishes they were able to compete for a gold ball at the end of the shortened spring season.

That’s not an option, but there is plenty to play for with a Greater Spokane League title on the line. Just ask Degenhart, who wants to win a title for Wildcats point guard Jojo Anderson, an instrumental piece of Mt. Spokane’s 3A state finals run in 2019 and Tacoma Dome return trip in 2020, who is out for his senior season after undergoing shoulder surgery.

“It’s going to mean the world … That’s what he would want out of us, to win a GSL title for him,” said Degenhart, SBLive’s No. 3 ranked recruit in Washington.

That desire to put away a team that has given him fits his entire high school career was on display when he scored six straight points to open the fourth.

He then proceeded to convert a three-point play to break a 44-44 tie with 4:15 left, and followed that up with a crossover spin and putback to go ahead 50-46 with 46 seconds to go.

“Just seeing the ball go in the hole really makes your confidence go up,” Degenhart said.

Kobe Simpson hit a pair of free throws to stretch the Mt. Spokane lead to six. Preps’ Aiden Von Buchwaldt was fouled shooting a 3 with nine seconds left and made two of three free throws, then Mt. Spokane turned the ball over on the subsequent inbound, but the Bullpups couldn’t convert a bucket.

The Bullpups held the Wildcats 20 points below their season points per game average (72.4), but couldn’t find an answer on offense down the stretch.

Bullpups may be on a three-game skid. But they aren’t hanging their heads.

For long stretches on Saturday evening, it looked like Gonzaga Prep may get its signature win.

Though the loss was a frustrating third-straight, an uncharacteristic skid for teams led by coach Matty McIntyre, it showed the Bullpups (5-4, 3rd GSL) it was capable hanging with anyone, even absent its leading scorer.

Senior guard Hodges Flemming left the team before the Central Valley game on Thursday, McIntyre confirmed, which forced the Bullpups to go on without its point guard and leading scorer. Flemming had 40 points in the season-opening loss to Mt. Spokane.

“I was so proud of how we came out, played D, played O and stayed together throughout this whole week,” Stevens said.

No player scored in double figures, but Prep did most of the talking on the defensive end, holding the Wildcats to 29 points in the first half.

Ask the Bullpups, and they’ll tell you they’re already hoping the teams meet again in the GSL playoffs, which start next week.

Jayden Stevens is at his best when he has his fingerprint on more than one facet of the game.

Not only was he tasked with checking Degenhart, but he also scored timely buckets (a team-high 9) and logged two blocks, punctuated with the highlight of the night.

He jetted back on a fast break to find himself defending it one-on-one, and when the opposing player rose up in an apparent attempt to lay the ball in, or perhaps even dunk, he rose up and swatted the ball back.

“You just (have to) line it up,” Stevens said. “I think he tried to dunk on me. I couldn’t let that happen.”