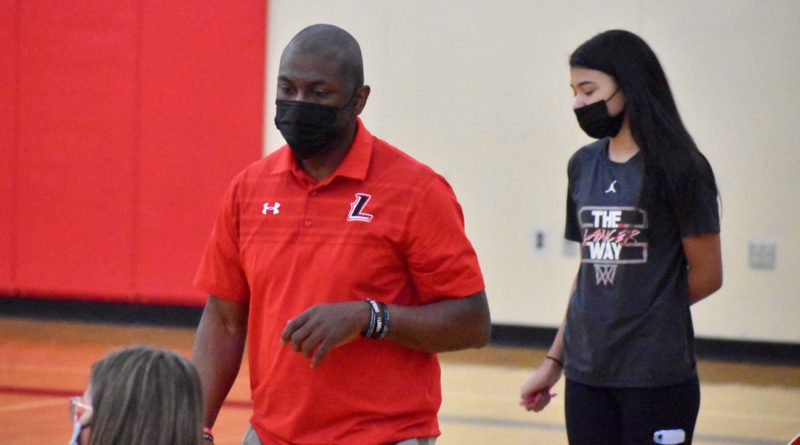 Chris Colvin was doing just fine as a Spokane-living stalwart basketball coach on the AAU circuit.

But one night in 2017, he got a text message from one of his players’ parents, saying that Liberty High School in rural Spangle, located 20 miles south of Spokane, needed a new girls coach.

A fresh-look adventure? The California native had lived in different cities around the Northwest, so why not try something different?

He did – and brought his two talented basketball-standout children into town with him.

Colvin hit a jackpot with his decision, leading the Lancers to the Class 2B title in 2020. He was named that classification’s coach of the year.

And now – it’s triple trouble around Spangle. Not only has Colvin returned for a fourth season, his daughter, Teagan, is a ninth grader on the varsity squad.

When those two wrap up games, they can relax in the stands and watch Tayshawn, a junior on the boys team, do his thing.

Colvin sets specific boundaries coaching his daughter in high school: In the gym, they abide by a coach-daughter understanding. But once the basketball stops dribbling, they resume a father-daughter relationship again.

“I’ve learned from that mistake (coaching) my son,” Colvin said. “My relationship with these two as a parent is more important to me than how well or poorly they played in a game.”

Teagan has a wealth of on-court experience playing for her father, including in AAU with the Northwest Blazers.

With last year’s 2B state player of the year Maisie Burnham off to college, Teagan steps right in as the leading voice on a Liberty team with a few other young but promising pieces.

“They left a huge thing for us to come in after winning state last year,” Teagan said. “We’ve had to figure it out on the fly.”

In her first varsity start against Upper Columbia Academy, Teagan scored 12 points and led the Lancers to a victory.

“In early games, she was a little hesitant because she was trying to get used to (high school ball). But in recent games, she’s been killing it. I love watching her play.”

On Friday, Teagan tallied a game-high 23 points in Liberty’s victory at St. George’s.

“I am actually honestly grateful to have a season,” said Teagan, who already holds a Pacific 12 Conference offer from Washington State University. ‘It has been a lot of, ‘Games, games, games’ and not a lot of practice, but I’ve enjoyed it a lot. It’s been a great start to my high school career.”

Tayshawn, also a point guard, is a more established commodity at the state level. He was a preseason all-state pick in Class 2B heading into this season.

And since the boys play later, he usually performs under the watchful eye of both his father and sister – like Friday when he poured in a game-high 24 points as the Lancers upended St. George’s.

“(Dad) is still in coaching mode … but not as big,” Tayshawn said. “He doesn’t like, when watching one of his kids, to have to be locked in on coaching and figuring everything else when he could just love watching his kid play.”

It is a life Colvin now would not trade for anything.

“I am super blessed,” Colvin said.