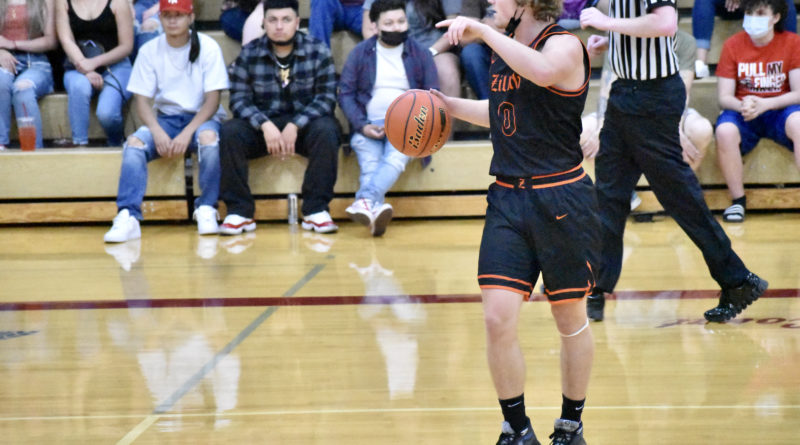 TOPPENISH, Wash. — Jay Sanchez looked around the Toppenish High School gym during warmups Thursday night and was hit with a sense of nostalgia.

Toppenish and Zillah were gearing up playing in front of a sold out house (by pandemic standards, at least) with a 1A South Central Athletic Conference regular season title on the line.

He felt competitive tension between the schools, located fewer than five miles apart, and the 14-year Wildcats assistant coach was reminded of the decades-long rivalry between the two schools dating back to the 1970s, which he grew up celebrating, then took part in as a student in the 90s.

“Some of our old-timers are like ‘man, the stars are aligned,” Sanchez said, after Toppenish classed back down to 1A and into the SCAC.

On Thursday night, Zillah staved off Toppenish 76-71 to clinch another 1A SCAC regular season title outright, and the basketball gods delivered another back-and-forth local rivalry game in front of a ticketed crowd at Toppenish Middle School that sold out in around an hour.

Leopards standout guard Claysen Delp finished with a game-high 32 — more than double what Toppenish held him to the first time around — and Luke Navarre added 24 points for Zillah.

After years of preparation, it’s Clay Delp’s turn to lead at Zillah

After going for a game-high 32, including 17 in the final 11 minutes, Delp was defiant.

“They were the first team to deny me the whole game,” he said of his 14-point outing the Zillah’s May 18 win.

The 6-foot-2 guard trained for months entering to be the Leopard’s go-to scorer his sophomore season in 2019-20 for a team that was coming off of a 1A state title romp, but had key roles to replace.

Then all-state guard Mason Landdeck, a volume scorer, transferred in from Cashmere, forcing Delp to cede some of his responsibilities (and he was happy to do so).

Now, it’s Delp’s team, as well as Navarre, the versatile sophomore wing. He’s proven thus far he’s more than ready to not just carry the team in scoring, but also facilitate and check the opponent’s best player, as he did with Toppenish uber-athletic junior Jason Grant.

“He’s a stud,” Mengarelli said. “He can make big plays on both sides of the ball.”

And after a couple games of uncharacteristic shooting and fouling out in the fourth quarter in the team’s lone loss to Prosser, the fire within Delp burned entering Thursday night.

“He owed us one in his mind, we were on him pretty hard,” Mengarelli added. “He’s our leader, he’s our guy and it was nice for him to be able to reward us tonight.”

For Delp, beating Toppenish is a feat years in the making. He faced many of the same faces in youth sports and AAU growing up, and lost the majority of the time against them.

Those losses carried into high school. The Wildcats beat Zillah on a Perez buzzer-beater in the same gym last season. And a Perez/Grant-led Toppenish football team beat Zillah 20-13 in March.

“I’ve never beat ‘em until I got to high school, so it feels pretty good,” he said.

Toppenish has all the pieces, even if Mesplie was displeased with effort

Opponents have to be ready for the quick-footed Wildcats’ disruptive full-court press.

And when it comes to whose hands to put the ball in when a bucket is needed, Toppenish has options.

While it may still be figuring out who its go-to scorer is, there are plenty of ready-made players who can give the Wildcats offensive output.

Athletic junior swingman Jason Grant, also the school’s star wide receiver, is a matchup nightmare and a terror to stop heading to the basket with a head of steam. Perez, the sophomore point guard, has the ability to hit timely shots and create his own, in addition to facilitating. Sophomore Riley Mesplie is a knock-down shooter, and Rivera showed Thursday night he can score on all three levels.

But the Wildcats see beating Zillah, winners of two of the last four 1A state titles, as a barometer for success.

They got close Thursday night. There were nine lead changes (seven in the first half) and the game was tied seven times in the second half, but the Leopards pulled away, holding their biggest lead (9) with 5:15 to go in the fourth quarter.

Mesplie bemoaned his team’s defensive effort. Offensively, nobody took over quite like Delp on the opposing team.

“It’s a little disheartening our kids didn’t step up to the challenge tonight,” Mesplie said. “We played hard, but didn’t play smart in key situations throughout the game.”

Rematch(es) in store? Somebody tell the old-timers.

Sanchez isn’t the only one who remembers the Zillah-Toppenish battles of old.

“It’s funny, because a lot of the 40, 50-year olds talk about how awesome it was,” Mengarelli said, “then we kind of got separated with school sizes, and now to have it back in is awesome.”

Since the state tournaments won’t take place in a pandemic-condensed season, the eight-team 1A SCAC  playoff on deck will the season’s culminating event, save for an invite-only proxy-1A tournament in hosted by Cascade Christian in Bothell the first week of July, in which Toppenish is participating and Zillah is not.

Both Zillah and Toppenish, which enter the playoff the one and two seeds, respectively, fully expect to see one another again in short order.

“Hopefully we can win all the way through and meet up at Zillah,” Mesplie said.

Both team’s cores are comprised of players who will all return next season, and both expect to be playing deep into the first week of March 2022.