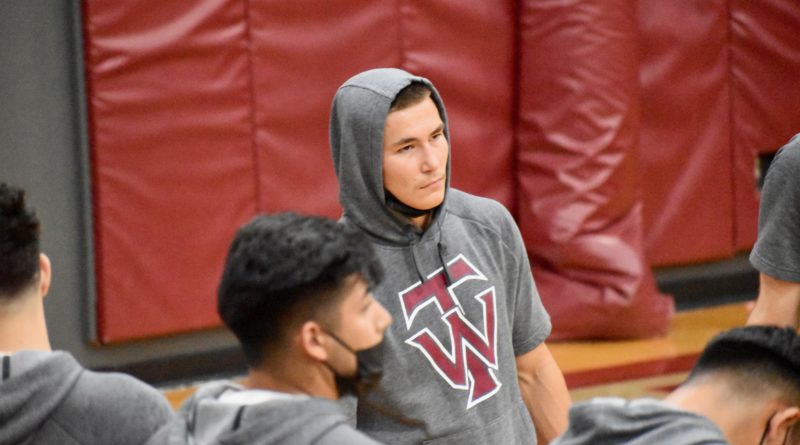 TOPPENISH, Wash. – The high school sits off Hwy. 97 – and that is appropriate since the Wildcats’ sports teams often like to put their foot on the gas and go.

In the middle of it all – literally – is junior Jason Grant, the anchor enforcer.

Now if you approached Grant off the football field or away from the basketball court, you’d seriously wonder if the teenager had it in him to aggressively put the clamps on another competitor.

“If you get him mad, he can get pretty mad,” Toppenish’s sophomore quarterback and point guard Joshua Perez said.

Case in point: During a practice leading up to the 1A South Central basketball showdown with Zillah on Thursday night for the league championship, a teammate did not get to the right spot on the floor during a play. And suddenly the low-boiling Grant gushed with frustration.

“He started yelling,” Perez said. “And I was like, ‘Where does that come from?'”

That intensity showed up plenty in the Wildcats’ 76-71 loss to Zillah. Grant had 15 points playing in the post – and still leads the team in scoring at nearly 19 points per game.

“He thinks he can go further in football,” Perez said. “But I think he can go far in both (sports).”

Despite is points-per-game prowess, Grant isn’t really a No. 1 scoring option. At 6-foot-2 and 205 pounds – the tallest regular on the team – he is asked to rebound and defend the paint, even though he can bring the ball up like a guard.

A physical specimen, Grant is on the cusp of becoming not only an all-state-level wide receiver, but also an emerging recruit in the class of 2022.

In just five games this spring, Grant has 22 receptions for 400 yards and eight touchdowns, including scoring a school-record six TDs in a game against Wapato.

He also had four interceptions at safety, and even unleashed a 56-yard punt.

In total, he found the end zone 12 times.

“I had the same stats as a sophomore, but played in the shadow of Manuel (Felan),” said Grant of the his 900-yard senior receiving teammate. “You could say this was my breakout season.”

Not bad progress considering Grant was a quarterback in middle school, and did not turn out for the high school team as a ninth grader.

And now, not only does 2021-22 set up to be a big year for Grant personally, the Wildcats will likely be in the thick of things in both sports at the state level.

“It is exciting because I know the potential we have,” Grant said. “But more importantly, I want to send my lifelong teammates … out with a bang.”