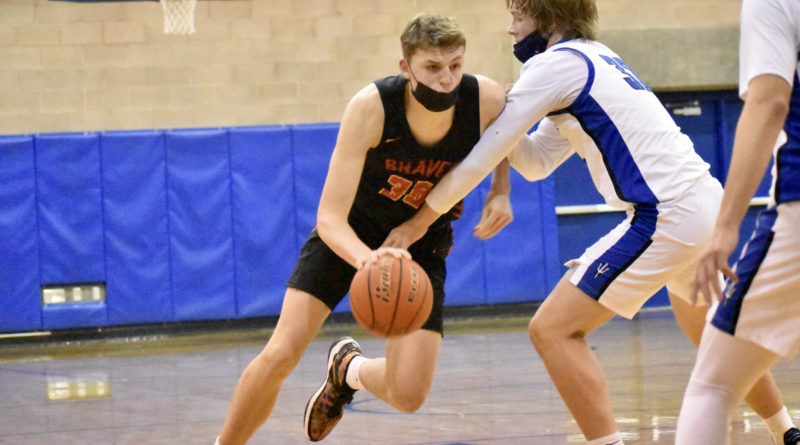 WALLA WALLA, Wash. — Tyler Bilodeau was never pushed, prodded or even gently guided into playing any particular sport at a young age.

His parents, former NHL first round draft pick Brent Bilodeau and Cass Bauer-Bilodeau, who played in the WNBA, made an effort not to nudge him to follow in their footsteps.

“I played a lot of different sports growing up,” Tyler Bilodeau said. “They just supported me in all of that.”

Naturally, he gravitated toward hockey and basketball. And as Tyler Bilodeau’s love for basketball has grown in lock step with his potential, the Kamiakin junior has found himself going to them for advice. And it’s starting to show.

The 6-foot-8 forward grew four inches, packed on around 25 pounds of muscle in the 14 months between his sophomore and junior seasons, and has emerged as a Mid-Columbia Conference player of the year candidate and one of the most versatile forwards in Washington, averaging a conference-best 23.1 points per game, neck-and-neck with Boise State-bound Chiawana standout Kobe Young.

It was a transformation even opposing coaches in his league didn’t foresee coming so quickly. As a sophomore, he played around nine minutes per game as a backup in a formidable front court featuring Kyson Rose, a 6-10 center now playing at Central Washington, and the hulking 6-7 Eastern Washington football commit Messiah Jones, who is now his front court mate.

Largely sidelined from 5-on-5 action throughout the prolonged offseason brought on by COVID-19, Bilodeau enjoyed his largest growth spurt yet to 6-foot-8, when few were watching. He’s been the catalyst to an 8-1 start by Kamiakin, which returned five rotation players from a team that placed sixth at state in 2020.

Bilodeau flashes a rare ability to shoot from all over the court, take defenders off the dribble and score with his back to the basket. Defensively, his disruptive length forces opponents to game plan around it.

In the 2021 season-opener, Walla Walla, an SBLive preseason all-classification Top-50 team, became the first to find out how much Bilodeau has improved. He dropped 34 points on 14 of 19 shooting (6 of 8 from 3-point range) and grabbed nine rebounds.

“If you watched him play last year you wouldn’t even recognize him this year,” Kamiakin coach Brian Meneely said.

“He’s really starting to understand people are going to be physical with him and body him, and he’s having to react to that … he’s just bigger, and all the parts of his game are better.”

(Walla Walla handed Kamiakin its first loss in the rematch, getting Bilodeau in foul trouble and holding him to 27 — mostly in the first half)

As his focus has sharpened on improving, he’s found himself turning to his mom for advice more frequently. Cass Bauer-Bilodeau starred at Hysham High School in small-town Montana, where she set the MHSA single-game scoring record (56 points) and is in the state association’s hall of fame. She went on to become a two-time honorable mention all-American at Montana State, and the Big Sky MVP in 1992-93 before playing three years in the now-defunct ABL and four years in the WNBA.

Tyler Bilodeau loves watching his mom’s old film and asking her for tips on improving his game. Her biggest focus with him has been on his fierceness in the paint — something that helped her excel.

“She’s taught me a lot of moves down low, she had a really good mentality, and I’m getting there,” Tyler Bilodeau said. “She’s harping on me to get that dog mentality.”

As he’s sprouted to 6-foot-8 (and counting), he’s reshaped his body by working out with Kennewick-based trainer Tenaus Dunn, who trains Tyler, as well as his twin brother Jacob Bilodeau, who is the better hockey player between the two.

Tyler Bilodeau chalks his weight gain to just “eating a lot,” but his competitiveness with his brother in the weight room has pushed him to be better, to work harder.

“Now Jacob wants to be better than Tyler, and Tyler wants to be the best,” Dunn said. “So for them being in the weight room, doing speed and agility at the same time, those two really, really pushed each other, and that made a big difference. Especially for Tyler.”

Jacob Bilodeau, who stands around 6-foot-4, plays JV and suits up for varsity basketball at Kamiakin.

Tyler Bilodeau has plenty of athletic success to model his approach after, including his cousin Payton Turner, a defensive end who was taken in the first round of the 2021 NFL Draft by the Saints.

He’ll continue to heed their advice as he plays with Washington Supreme of the Under Armour Association this summer, and beyond.

“My parents always say high school is one small step, you’ve got college and pro,” Tyler Bilodeau said. “And you’ve got to keep working to get to where you want to get.”