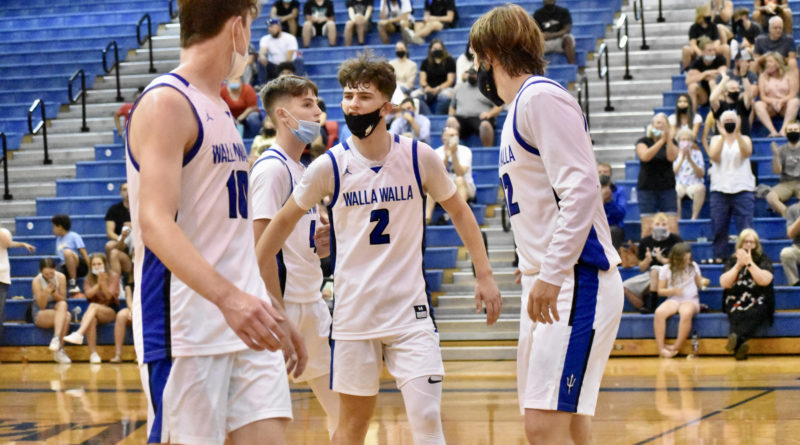 But what the Wa-Hi coach didn’t factor in was a four-inch growth spurt, 25-pound body reshape and a subsequent breakout season from Jones’ front court mate Tyler Bilodeau, who torched the Blue Devils in the season-opener and subsequently the rest of the Mid-Columbia Conference.

So Walla Walla entered Tuesday determined to not let it happen again. That was the fuel behind its shut-down 74-65 home win, Kamiakin’s first loss of the shortened spring season.

Bilodeau scored a game-high 27, but sat long stretches of the second half with foul trouble. Cornia scored a team-high 24, and had Bilodeau one-on-one as a defensive assignment. Walla Walla’s Dillon Wasser added 18 points and Jones pitched in 11 for Kamiakin.

It’s circumstance, really, that Berg and the Blue Devils had to be the easel on which Bilodeau would first showcase his transformation into a true feature player.

And now, Walla Walla’s humbling 37-point loss to Kamiakin to open the season — its worst loss in more than two and a half years — is a footnote in a season which the Blue Devils are trending upward in the back half of league play.

“No state championship, but we still have the chance to cut down some nets,” Berg said.

Jones is the team’s de facto leader on and off the court, Bilodeau, who averaged around 10 minutes per game as a sophomore, is one of the state’s quickly rising stars and both wield skillsets that complements one another nicely.

But on Tuesday night, a stout two-way performance from one of the MCC’s most consistent players in the last two years made all the difference.

Cornia, who has not yet decided on a college basketball destination, posted a steady offensive outing, notching 14 of his 24 points in the first quarter, mostly on one-on-one face-ups and post-ups. Berg conveyed to Cornia (17.3 points per game this season) how confident he is in his team captain’s ability to score the ball, going as far to say there aren’t many defenders who can stay with him.

Plus, teams have to factor in sending extra pressure, on account of Wa-Hi’s perimeter shooting in Whitworth-bound Jacob Coram, Diego Jaques and Wasser.

“If they go one-on-one against you, we’re going to put our money on you and see if you can get to the rack and score,” Berg told Cornia, who has gone from 42% 3-point shooter as a junior to more of a drive-heavy big. “He’s just so versatile and different. He gets the different angles. It was fun to watch him work.”

But his impact was perhaps most felt on the defensive end, where his physical play lured Bilodeau into foul trouble, keeping him off the floor for long stretches of the second half.

“That helped us out quite a bit,” Berg said. “The first game (Cornia) missed some shots he doesn’t usually miss.”

Added Bilodeau, who is averaging a near-MCC best 22.6 points per game: “He’s a really good finisher around the rim. He’s only 6-5, uses his body well and protects the ball pretty good.”

With game hanging in balance, the Blue Devils closed down the stretch

In a back-and-forth game, Wa-Hi’s ability to get a bucket down the stretch proved to be a deciding factor.

Senior guard Brandon Smith drove and scored a contested layup to put the Blue Devils up six with just under three minutes left, and Cornia scored in similar fashion to maintain that lead with 1:36 left.

Kamiakin couldn’t buy a bucket down the stretch, and junior shooting guard Diego Jacques, who finished with 12 points, iced the game at the free throw line.

“They got stops and we didn’t get stops,” Kamiakin coach Brian Meneely said. “When our shots didn’t go in, we weren’t Abel to get stops on the other end. We gotta get stops when we’re not scoring.”

After a regular season winner is crowned, the Mid-Columbia Conference will play a set of four-team tournaments, with the top four playing a semifinal, title and third place game on June 18-19.

Could Tuesday have been a preview of the league title game?

As it stands, Kamiakin and Walla Walla are locked atop the standings at 8-1, with Chiawana and Richland knotted behind them, each at 6-3 after the Riverhawks’ 73-68 win over the Bombers Tuesday night.

Tuesday night was an indicator that no matter Kamiakin’s hot start, the MCC is as tough as ever.

“We knew we had to have this one if we were going to have a chance at (a league title) during the regular season, and we’ve still got some tournament play. We’re trending in the right direction, excited about what our guys are doing. We’ll see where it takes us.”