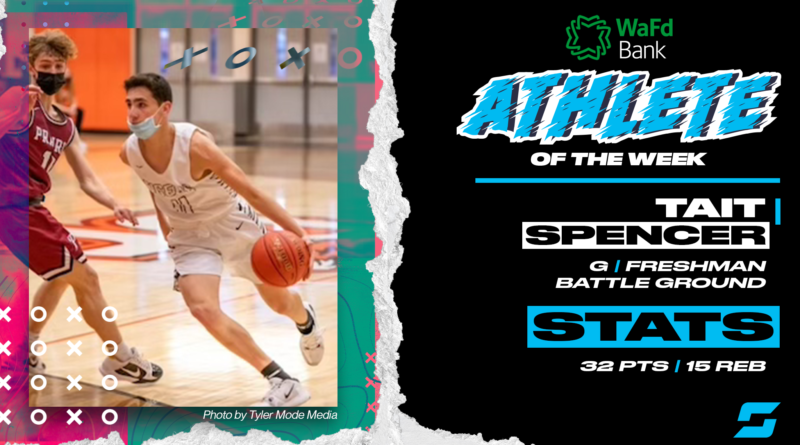 Congratulations to Battle Ground freshman Tait Spencer for being voted SBLive’s WaFd Bank Washington High School Athlete of the Week for May 17-23!

The freshman stepped up and scored 32 points and pulled down 15 boards in a win over Evergreen.

Spencer received 38.81% of the vote, beating out Wilson’s Joclyen Wyatt who finished second with 30.93%. Lincoln of Tacoma’s Kristol Ayson finished third with 13.9% and Camas’ Ava Smith finished fourth with 4.07%. There were over 91,000 votes tallied this week!

Olivia Moore, Mead girls basketball: The junior guard scored 18 points in the season opening win over Lewis & Clark, and had 19 points, including three 3-pointers, in a victory over reigning GSL champion Mount Spokane.

Ava Smith, Camas girls basketball: The ninth grader tied a school record with eight 3-pointers, and poured in a career-high 26 points in a tough 4A GSHL road victory at Union.

Joclyen Wyatt, Wilson girls basketball: The senior erupted for a season-high 40 points in a win over Spanaway Lake. She also scored 24 points in a loss at Lincoln of Tacoma.

Julianna Walker, Annie Wright girls basketball: The Syracuse signee had a season-high 45 points – her 18th career game of 40 or more points – in a win at Vashon Island.

Jenna Andringa, Sunnyside Christian girls basketball: The senior forward posted a career-high 31 points in a victory over Yakama Tribal, and had 26 points in a win over Kittitas, writes the Yakima Herald Republic.

Ella Claus, Redmond girls softball: The junior outfielder hit a two-run triple in an 8-0 win over Juanita, and had another three hits in an 8-3 win over the Rebels.

Lexi Hernandez, Lynden Christian girls basketball: The senior forward led the defending 1A champions to a big win over Nooksack Valley with 20 points. She scored the first seven points of the game – and her team’s first 14, writes the Lynden Tribune.

Hallie Kamphouse, Nooksack Valley girls basketball: The sophomore knocked down eight 3-pointers and led the Pioneers with a game-high 28 points in a win over Blaine.

Ashley Schow, Tenino girls basketball: The senior center scored 27 points, 19 in the second half, in win over Elma. She also had 24 points against Hoquiam.