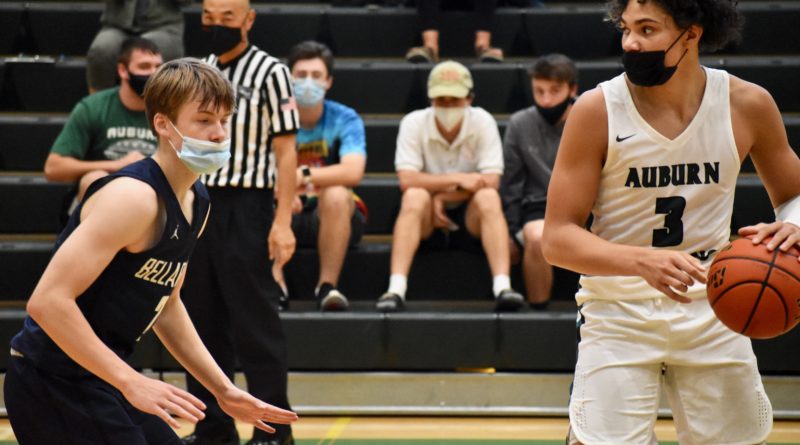 AUBURN – Many WIAA programs let out a collective groan when it was announced there would be no state high school basketball championships in Washington in 2020-21.

Given what they were returning – and the new additions – none were more disappointed than the Auburn Trojans.

There’s hope next season. In the meantime, all the Trojans can do is keep piling up impressive spring-season victories – and they did again Saturday with a 75-53 win over visiting Bellarmine Prep.

Trevon Blassingame poured in a game-high 23 points for Auburn. Kaden Hansen added 15 points, and Maleek Arington and Semaj Brown chipped in with 10 as the 3A NPSL favorites improved to 3-0.

“We’ve come out with a drive to win every game,” Blassingame said.

Frankly, the Trojans have taken a noticeable step in their development from last season. Blassingame is playing more with the ball in his hands, and is attacking from all spots on the floor. Hansen has become a more assertive scorer (he has grown 6-7 inches, too). Arington does what he does running the show. Amar Rivers, the team’s lone senior, gives the team another quick-twitch, long-armed presence on both ends. And Dae’Kwon Watson is rounding into form after an injury-plagued sophomore season.

Auburn boys coach Ryan Hansen said this is the deepest roster he’s had in the program in his 19 seasons.

“We can really do some things with our lineups,” Ryan Hansen said. “We can go big if we need to, or go a little more athletic and faster.”

Then there is bouncy ninth grader Luvens Valcin, who has fit in nicely, giving the Trojans a physical threat on the wing – and off the bounce.

“Getting the opportunity to play is cool, but not having that postseason is really going to light a fire for our guys,” Ryan Hansen said. “They are really looking forward to next year.”