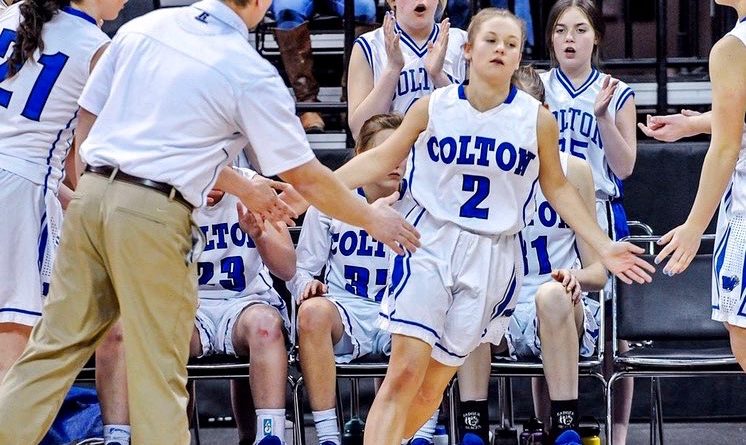 Vining has coached 401 games – 361 of them are victories – in 16 seasons with the Wildcats, and has put together one of the most impressive runs of high-level basketball in WIAA history, winning 10 Class 1B titles in an 11-year span.

RIght with him every step of the way has been his daughter, Rylee – starting as a young girl hanging around the bench, to becoming a team manager and finally finishing up her career Wednesday night as a player.

“That was emotional,” the coach said. “It was not just the end of the season – it was the end of an era, in a way.”

Way back in 2005, as Vining began slowly building Colton into a state-championship stalwart, his daughter would attend practice regularly at a very young age.

“I would come to practice and put her there at midcourt in her car seat,” Vining said, “hoping she would not get hit by a ball.”

Everywhere Vining went – games, tournament and what would eventually become regular appearances for the Wildcats at the 1B tournament in Spokane – Rylee went with him.

“She was on the bench and sat right next to me,” Vining said. “She started drawing up plays during the game when she was 5 or 6 years old.”

It’s one thing to jot down what you think is a legitimate play as a youth. It is something entirely different when the play you design is actually run in a game – on the fly.

“When she was 10, we let her draw one up during a timeout,” Vining said. “She had gotten a pretty good knowledge base.”

Once she was in fourth grade, Rylee became one of the team’s four managers – filling up water bottles, retrieving basketballs and making sure game jerseys were in order.

“It was a big deal,” Vining said. “Her relationship … with the older players was special. They treated her like one of their sisters.

“This could probably only happen at a smaller school.”

The season this spring was shortened to nine games because of pandemic complications. The Wildcats went 7-2. And in one of those victories against DeSales, Rylee tallied a career-high 35 points, including nine 3-pointers.

On Monday, they held their only home game against Garfield-Palouse. It was also ‘Senior Night.’ Rylee and teammate Josie Schultheis were honored before the game with family.

“When I coached football, my last year was my son’s senior season (in 2018),” Vining said. “This senior night was a little tougher. It was pretty emotional.”

And on Wednesday night, the Wildcats concluded their season with a win over Oakesdale. Rylee scored 12 points – and finished the season averaging 17.2 points per game.

“Afterward, it hit us both,” Vining said.

Rylee will now go off to Washington State University next fall to study sports psychology. And Vining will continue to coach at Colton.

“This was something so cool to be able to share together,” Vining said.