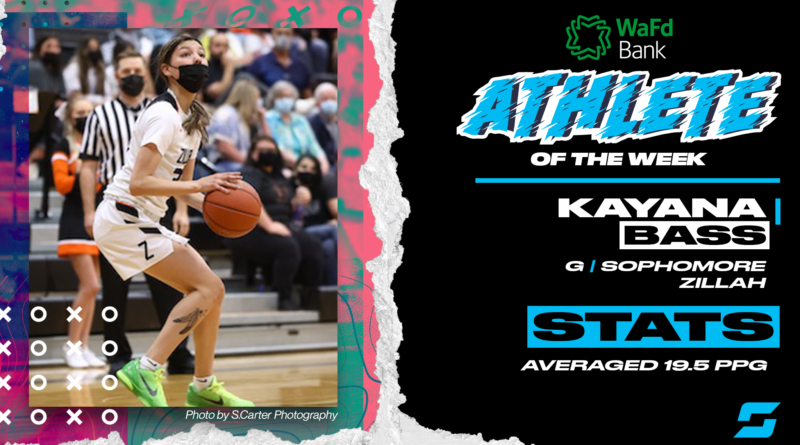 Congratulations to Zillah sophomore Kayana “KK” Bass for being voted SBLive’s WaFd Bank Washington High School Athlete of the Week for May 10-16!

The Leopards’ sophomore sharpshooter scored 16 points in an upset over La Salle, then poured in a career-high 23 points in a victory over Naches Valley.

Bass received 45.54% of the vote, beating out La Salle’s Trista Hull who finished second with 24.18%. Kamiakin’s Tyler Bilodeau finished third with 8.13% and W.F. West’s Drea Brumfield finished fourth with 7.21%. There were over 29,000 votes tallied this week!

Drea Brumfield, W.F. West girls basketball: The junior wing had a game-high 23 points, 20 coming in the second half, as the Bearcats beat River Ridge. She also had 16 points in a win over Ridgefield.

Twazae Gladney, Richland basketball: Notched a double-double, 20 points and 10 boards in a win over Hermiston.

Alyson Deaver, Sumner girls basketball: The junior post player had a career-high 31 points and 14 rebounds in a loss to Emerald Ridge, and 20 points and nine rebounds in a win over Bellarmine Prep.

Brooklyn Hicks, Timberline basketball: Scored 25 points and pulled down 15 boards in a win over Yelm.

Stevan Rodriquez, Eisenhower baseball: Rodriguez pitched a complete game shut out, 5 innings (they ten ran them). He gave up 2 blooper hits, 8 strike outs, and 1 walk. The pitcher was also 2-3 at the plate, with a line-drive single, a triple, and a walk. Rodriguez had three RBIs, scored three times, and had three stolen bases.

Morgan Flesland, Mount Spokane softball: The Oregon State signee pitched her fifth no-hitter of the season – striking out 15 with one walk – as the Wildcats won the 4A/3A GSL title over University.

Kobe Young, Chiawana basketball: After missing most of his junior season, he scored 27 points, grabbed eight boards and three steals in a loss to Richland.

Ella Gallatin, Snohomish girls basketball: The junior guard had a game-high 23 points in a win over Stanwood, reports the Everett Herald.

Cayden McDaniel, Wilson basketball: How’s this for a sophomore start? Scored 33 and 27 points to open the season at the state fairgrounds.

Kendall Hooper, Capital girls basketball: The senior guard sank four 3-pointers en route to a season-high 22 points in a victory over North Thurston. She tallied 19 points and 14 rebounds in a loss to Timberline.

Laurel Quinn, King’s Way Christian girls basketball: The guard had a game-high 24 points, including six 3-pointers, in a win over Goldendale.

Halle Wright, Prosser girls basketball: The junior forward exploded for a game-high 21 points, 13 coming in the fourth quarter, and the Mustangs stunned previously-unbeaten (and preseason No. 1 Ellensburg in 2A CWAC action, reports the Yakima Herald Republic.

Tyler Bilodeau, Kamiakin basketball: Finished with 34 points, including 6 of 8 from 3, in a win over Walla Walla.