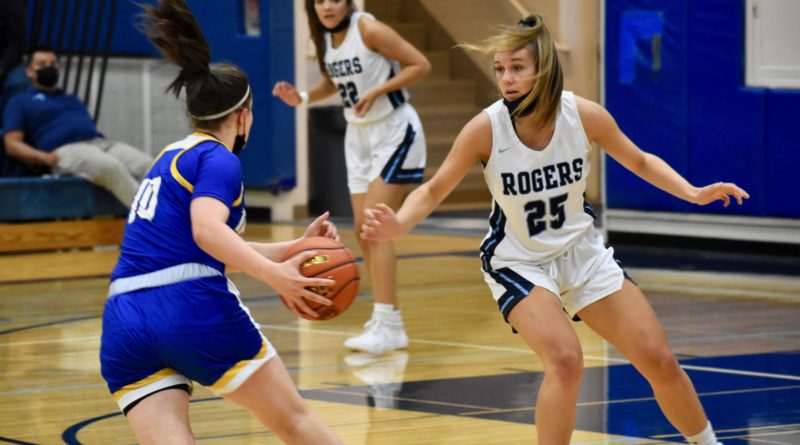 PUYALLUP – Over the past two-plus seasons, few teams in the 4A SPSL have been able to match the Rogers Rams‘ fast and unrelenting pace.

But they found a team more than capable of running with them – from a different 4A league up the road.

Tahoma is full of sophomores and ninth graders who let it fly – which is a big reason why the Bears are co-favorites in the 4A NPSL. And this young group posted one of its biggest wins to-date Monday night – a 64-57 comeback victory over the previously-unbeaten Rams.

Talented sophomore point guard Hope Hassmann fueled the rally with a game-high 22 points, 19 coming in the second half – and 14 in the first 4:58 of the third quarter.

Angie Cavanaugh added 17 points for the Bears, who made 11 3-pointers in the game. Allyson Pettit paced the Rams with a team-high 15 points, including three 3-pointers.

Did this signal a shift in South Sound girls basketball supremacy at the 4A level?

Maybe. Maybe not. But one thing is for certain – these Bears aren’t going away anytime soon.

But it was Rogers dictating the action, and getting easy shots in building a 19-6 lead late in the first quarter.

Cavanaugh was the first Tahoma regular to catch fire, tallying 11 second-quarter points, including three 3-pointers, and the Bears cut it to 32-28 by halftime.

From the opening seconds of the second half, it became Hassmann’s game to control.

She got to the basket on the Bears’ first possession, then stole the inbound pass – and scored again to tie the game at 32-32.

:The first couple fo quarters wasn’t really my games. I wasn’t getting the shots I wanted,” Hassmann said. “We had a good halftime talk as a team … and we came out and got a couple of steals.”

Hassmann scored eight consecutive points for Tahoma, including a pair of 3-pointers. Cavanaugh buried another shot from long range, and suddenly it was the visitors who had a double-digit advantage – 52-41.

Rogers cut it to 62-57 on Pettit’s 3-pointer with 50 seconds to go, but Hassmann calmly sank two free throws on the other end.

“Rogers is a really well-coached team …and I knew this was going to be a really tough game coming in,” Smith said. “I am just proud of the kids.”

Here are highlights from the Tahoma-Rogers game: