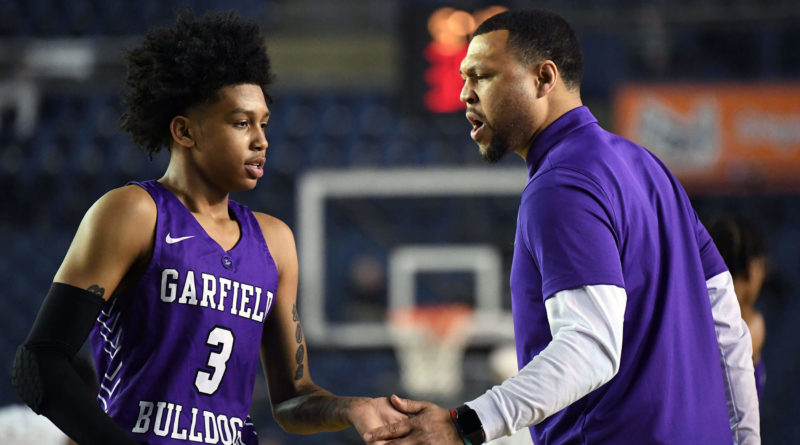 SEATTLE – Koren Johnson had a big night – a career-high 40 points – but it was couple of his Garfield High School boys basketball teammates who saved the day for the Bulldogs against Seattle Prep.

Raphiel Justice and Sherrell McCullum Jr. both hit corner 3-pointers in the final seconds of regulation and overtime to extend play, and the Bulldogs got one final stop to escape with a 98-95 double-overtime victory Friday night over the Panthers.

Seattle Prep trailed by as many as 16 points in the game – 10 in the fourth quarter – before rallying to take a 76-73 lead on Kyle Carlesimo’s two free throws with 13.4 seconds remaining in regulation. He finished with a team-high 35 points.

Justice received a pass in the left corner and rifled a contested shot over Carlesimo for a game-tying 3-pointer at the buzzer to send the game into overtime.

Against pressure, four Garfield players rotated the ball – and found McCullum, the 6-foot-6 big man, in the far right corner. He drained the 3-pointer just before the horn to tie it at 90-90, and send it into a second OT.

Devon Guidry sank a 3-pointer to give Garfield a 98-92 lead with 1:27 to go, but Tyler Mrus answered with his own from long range at the 49.2-second mark to give the Panthers one final shot.

After a steal near midcourt, Smith launched a corner game-tying 3-point attempt at the buzzer that rattled off.

Here are end-of-game (and OT) highlights from Garfield-Seattle Prep: