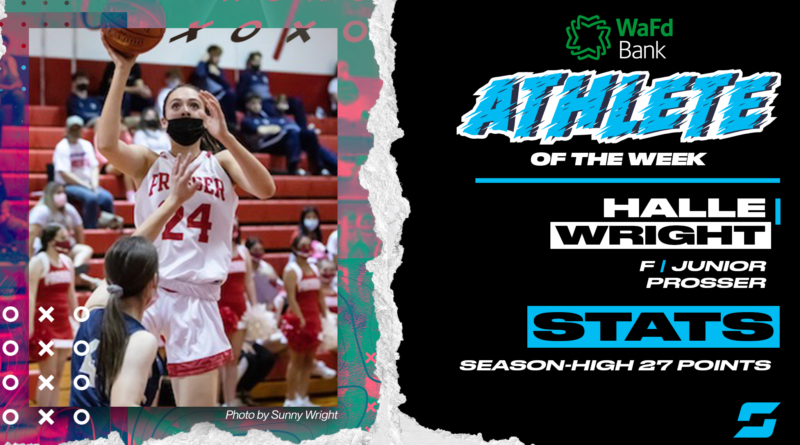 Congratulations to Prosser junior Halle Wright for being voted SBLive’s WaFd Bank Washington High School Athlete of the Week for May 3-9!

The junior scored a season-high 27 points in 2A CWAC win over East Valley of Yakima, reports the Yakima Herald Republic.

Julian Agosto, Nathan Hale (basketball): Has anyone sustained as hot of a start as Agosto? Followed up a 38-point opener with 32 points, seven boards, seven assists and three steals against Franklin, then 28 points and 10 boards against Cleveland.

Kolby Glenn, Naselle (basketball): Scored 29 in a win over Firm Foundation (1B).

Shealyne McGee, Camas (track): On Tuesday against Skyview, McGee jumped a new PR of 12 feet and is currently undefeated in both boys and girls in her last 3 meets.

David Grewe, Tri Cities Prep (baseball): The Jaguars’ ace Capped off an undefeated season against Kittitas Friday with a 10 strikeout, two hit shutout. He maintained a 0.00 ERA on the season.

Sarah Wright, Kentwood (softball): The freshman pitcher threw her second no hitter of the season on Tuesday night against Federal Way, striking out 16. On Wednesday against Mt. Rainier, she struck out 11 more in the 15-1 win.  At the plate, she went 5 for 7 with 3 RBI’s between the two games.

Alisha Anderson, W.F. West (softball): The senior outfielder sparked the Bearcats’ person-season run to a District 4 softball title with her second-inning grand slam in a 9-1 win over Rochester in the championship game. She also hit a three-run home run in a district semifinal win over Columbia River, reporters the Centralia Chronicle.

Noah Pepper, Selah (basketball): Dropped 34 points and pulled down 12 boards in a double-digit win over Ellensburg.

Anthony Smith, Eastside Catholic (track): The senior ran a sstate-best 10.36 seconds in the 100-meter dash, and 21.32 in the 200 at a Metro League quad-meet with Nathan Hale, Lakeside and Roosevelt.

Haden Hicks, Prosser (basketball): The senior guard became the Mustangs’ all-time leading scorer with 1,256 points in a win over West Valley of Yakima. He tallied a game-high 25 points, including 17 on free throws, reports the Yakima Herald Republic.

Nicky Gutierrez, Grandview (basketball): The senior had two big efforts last week, scoring 25 points over East Valley of Yakima, then 26 in a win over Ellensburg.

Rhys BeSerra, Decatur (track): The junior threw a personal-record and state-leading 144 feet, 63/4 inches in the girls javelin at a Federal Way invite meet.

Jacinda Lee, Camas (golf): The ninth grader posted a season-best 1-under-par 35 in a dual match at Camas Meadows. Her scoring average for the season in at even-par, reports the Columbian.

Kylee Stephens, La Center (basketball): The junior guard poured in 25 points in a 1A Trico win over Goldendale, and 24 points in a win over Seton Catholic, reports the Columbian.

Tatum Thompson, Woodinville (basketball): The junior guard posted a triple double – 23 points, 12 rebounds, 10 assists – in a win over Bothell. The Falcons finished KingCo 4A play at 5-0.

Sam Martens, Mt. Spokane (baseball): Tossed a nine-strikeout no-hitter with one walk in an 11-0 win over Ferris, reports The Spokesman-Review.

Ryan Orr, Tumwater (baseball): Struck out 13, allowed three hits and a walk in a complete game shutout of Washougal in a 2A district semifinal.