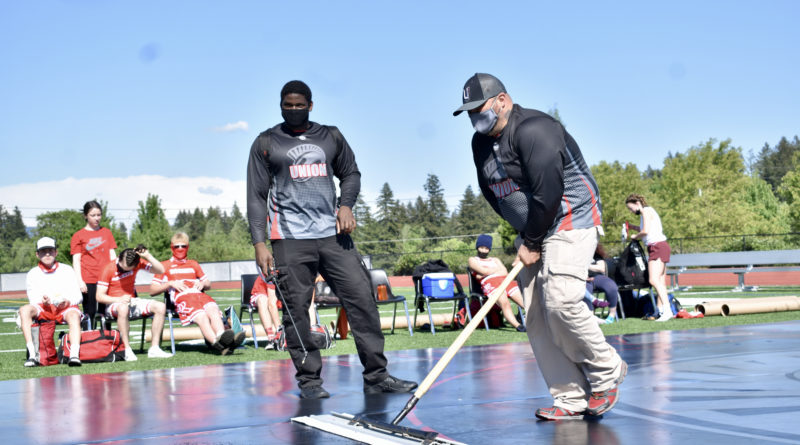 CAMAS — John Godinho showed up to school at 7 a.m. Friday morning to start the setup process. His wrestlers were a couple of hours behind him. Union High School wrestlers rolled out mats, chairs, tables and garden sprayer backpacks filled with disinfectant to ready their home facility for a meet later that day.

It was an especially joyous day, even compared to past home-opening meets. Some 14 months after the 2020 Mat Classic, high school wrestling finally returned to Washington.

Only this year, some meets are taking place on football fields instead of basketball gyms, a move many wrestling programs across the state, including the 4A/3A Greater St. Helen’s League, have made in order to maneuver state guidelines and allow for parents and spectators to attend.

“They’re excited, because it’s new,” Godinho, whose Titans opened the season inside Washougal’s gym Wednesday, said. “They may never get to wrestle outside (again) because it’s a winter sport and they work so hard and they didn’t know if they’d get to compete. Now today we get to compete.”

Wrestling has long been last in the line of high school sports to return in the coronavirus pandemic and has had to clear hurdles other sports have not in order to compete.

Wrestling seasons were moved to the end of the school year because the National Federation for High School State Associations and Washington state department of health deemed the sport “high risk” due to indoor competition and the nature of close contact.

Clark County is in Phase 3 of the state’s reopening plan, so meets can be held in gyms with a 200-person capacity limit. Some programs, like Union, have opted to wrestle outside so parents and spectators could watch in-person instead of watching at home on a live stream.

“Have you ever met a wrestling parent?” Godinho quipped. “They even come to the weigh-ins.”

Union senior Riley Aamold, who placed second in the 125 weight class at the 2020 4A Mat Classic, said wrestling outdoors was a first for her, as well as everyone on her team.

“I’ve never wrestled outdoors,” Aamold said. “It’s a first for everyone out here. Our team’s a lot smaller than it usually is … we’re a much tighter-knit group this year, we get to do team bonding … it’s just nice to having that family.”

On Friday, Union hosted Castle Rock and Mountain View for a dual meet (the visiting teams co-opted). The Titans typically head up to face Castle Rock, which is coached by Joe Godinho (John’s brother), every year. The rest of the league, as well as the 2A GSHL, has moved outside, too, as has the 1A Trico League and the Central 2B League, among others.

But Cowlitz County’s Phase 2 status places roadblocks for high risk sports like wrestling and basketball to compete, so Union decided to host.

Though turnout is low this season at Union, more wrestlers showed up to help setup than Godinho anticipated. That’s how bad they wanted to wrestle, he said.

After wrestlers laid down the mats, tables and chairs and disinfected the surfaces, they were required to take a COVID-19 antigen test, an extra layer of security state officials required for wrestling only, which delayed the start of the season around a month in the 4A/3A GSHL.

As long and bumpy the path to a return has been, Godinho has seen his wrestlers train in garages and barns to stay in shape during the shutdown.

“We have to fight for everything with wrestling,” he said, “which is good.”