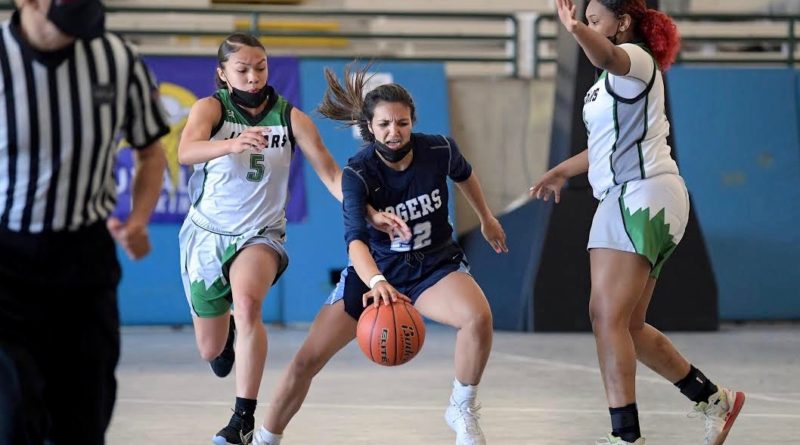 PUYALLUP – Amy Looker was fast asleep Wednesday when she woke to her husband returning home at 4 a.m.

Dane Looker, a former NFL wide receiver who is now an assistant football coach at Rogers High School, had spent the better part of 16 hours at “The Arena” lining a regulation basketball court with masking tape so his wife’s Rams’ girls varsity team could play a varsity game later that day.

Tired, he delivered the promising news before slipping into bed: “You have a court to play on now.”

And Pierce County now has a new home for its 4A SPSL and 3A PCL high school basketball teams – the Washington State Fair Events Center.

In the span of two weeks, athletic directors and coaches turned a crazy idea into an even-crazier reality by building three courts in one of the open-air but covered show arenas at the Washington State Fairgrounds in downtown Puyallup.

“We just couldn’t take ‘No’ for an answer,” Amy Looker said Wednesday before the Rams played intra-district rival Emerald Ridge. “So finding a ‘Yes’ became our theme.”

It became the focal point on a Zoom call for a 4A SPSL preseason coaches’ meeting April 28.

They suggested a big warehouse or hangar. Then, both came up with the idea of the fairgrounds.

“So I threw it out – ‘Fairgrounds, everybody!'” Looker said. “And it kind of got quiet.”

At that point, everything was on the table. But Looker kept coming back to the outside-the-box option of the fairgrounds, especially since she had a friend on the fair board.

“I still had a pit in my stomach (about the idea becoming a reality),” Looker said. “But I called (Jim) Meyerhoff (Puyallup School District AD) and said, ‘We’ve got to find a way.’ And Jim got right on board with it.”

Two days after the coaches’ meeting, Meyerhoff and Vick met Washington State Fair CEO Kent Hojem and facility rental and event services manager Debbie Baker at the fairgrounds to not only discuss the possibility of playing basketball there, but tour some of the potential landing sites.

The meeting went so well, Meyerhoff and Vick walked out cautiously optimistic this could be the spot.

“We knew there was a chance we could make it happen,” Meyerhoff said.

‘The Arena’ – a popular livestock show building – was the perfect size to house three courts. Except there was one problem – the surface was soft dirt.

Luckily, the Lookers had a family business – Looker Asphalt Inc. – and worked out a deal with Hojem to lay down a layer of blacktop in the arena.

After that, the plan picked up steam, even still with a checklist of things needed to be done:

*They needed to find a freight-moving company to pick up 27 massive crates of “Mateflex” sport-court pieces to build the playing surface. And Puyallup-based Bartelson Transport, Inc. volunteered for service.

*They needed to locate six portable basketball-hoop systems – and found three places willing to share in the WIAA, the Yakima SunDome (which Tacoma Public Schools AD James Neil and Wilson High School AD Johnny Lee picked up themselves and brought back) and the Excel Sports Academy in Fircrest.

After the asphalt was laid down Monday, 20-25 ADs, coaches and parents volunteered their time to build the courts for basketball.

“It is all because of a lot of good people who came together,” Meyerhoff said.

If the county stays in Phase 2, 400-plus games could be played at “The Arena” over the next month or so – with varsity, junior-varsity and ‘C’ team contests constantly running from Monday through Saturday.

“We were really excited. We haven’t played in a year and a half,” Rogers senior guard Allyson Pettit said. “I am very thankful for everyone who put this together for us so we have a place to play.”

Which happened because a few coaches and ADs would not take ‘No’ for an answer.

“It was coming down to just having two games and some non-league (games) – and I was just thinking, ‘We can’t do that,'” Looker said. “We could not look at our seniors and say, ‘I am sorry, you don’t get to play.’ Or anybody else for that matter.