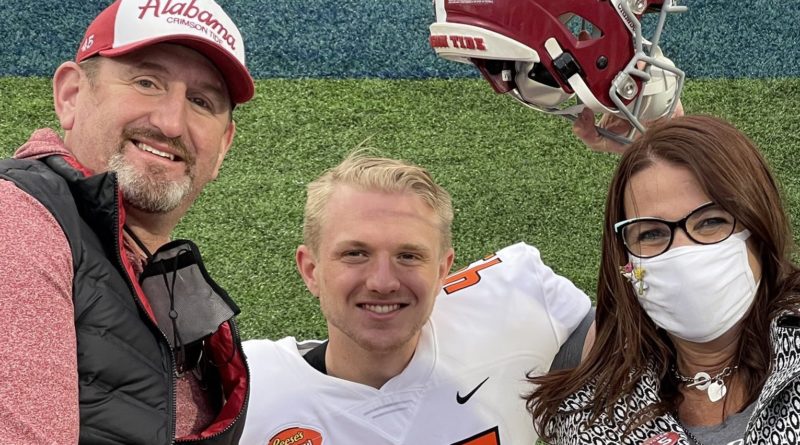 On the other end of a viral phone call that was viewed more than two million times on Twitter alone, the Alabama long-snapper, who prepped for two years at Skyview High School, erupted in joy when Carolina Panthers coach Matt Rhule called to tell him he had picked him in the sixth round of the 2021 NFL Draft.

“Are you serious?” Fletcher exclaimed in disbelief. “Dude, chill out brother.”

His father, Tom Fletcher, was on the other end of the line filming his son’s reaction from Thomas’ apartment in Tuscaloosa, Ala., where the Fletcher family – including Thomas’ mom, Tamy Harsh Fletcher – had set up to watch the draft.

The moment millions enjoyed for an afternoon, the Fletchers will cherish for the rest of their lives. In the hours and days after Thomas was drafted, his father re-watched the video more times than he could count.

When he wasn’t watching it, his mind was replaying a super-cut of all the work Thomas put in during his teenage years that built to draft day. The Chris Rubio snapping camps, the college showcases, the move to IMG Academy in Texas midway through high school and the three national championships appearances — and two national titles (2017, 2020) — at Alabama under coach Nick Saban.

“It was all that sacrifice and hard work and to hear his name called was pretty awesome and rewarding for him and in what he was able to accomplish,” Tom Fletcher said. “And obviously very prideful for his mom and I.”

Thomas grew up in Vancouver, Wash., and played his freshman and sophomore years for head coach Steve Kizer at Skyview High School. Tom, who was a long snapper at San Diego State and saw brief stints with the Seahawks and Raiders, worked for IMG and had a chance to move to Texas before Thomas’ junior year.

Thomas rose to become one of the nation’s top long-snapper prospects, rated No. 1 in the county by 247Sports and Scout and No. 3 by ESPN. He was a 2017 Army All-American Bowl selection.

On the first day of the draft, Thomas and his parents watched as his close friend and former Alabama quarterback Mac Jones was taken 15th overall. By the third day of the draft, as the fourth and fifth rounds went by, Tom could sense his son’s nerves start to tense.

Though Thomas won the Patrick Mannelly Award for the best long snapper in college football in 2020, it was no guarantee even the top player at the position would be drafted.

When the sixth round started, Thomas started fielding calls from teams interested in signing him as an undrafted free agent — a route that provides less certainty at making a roster — though he felt confident another franchise would take him in the late sixth or early seventh round.

That’s why he was so surprised when the Panthers came calling with the 222nd pick. Even though his father had predicted that’s where he would land.

After he received the call from Rhule, everything became a blur.

Messages and congratulations poured in from Kizer, as well as more Skyview coaches, like Julian Williams and others.

“He earned it,” Kizer said “(Long snapping) was his life.”

Tom was Skyview’s special teams coordinator. Kizer says the Fletchers are a member of the Skyview “family” to this day. Kizer remembers when Tom first bought Thomas a snapping net.

The rosters at IMG Academy and Alabama listed Fletcher’s hometown as Georgetown, Texas, because that’s where the family moved. Even his Wikipedia page (inaccurately) lists Georgetown as his hometown. (The Fletchers have since moved again, this time to Phoenix, with Tom accepting a job as the VP of Marketing Partnerships for the Phoenix Suns/Mercury.)

Now that Thomas in the NFL, he wants his hometown to reflect the place he grew up, the city where he’ll attend his high school reunion — the city claims as his home.

“I’ll walk my happy a** to Carolina right now, dude,” Fletcher told Rhule over the phone that day.

“I cannot wait to help you win.”