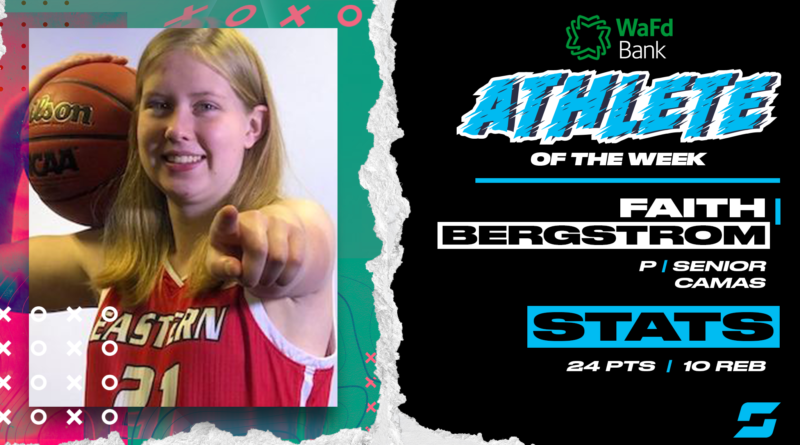 Congratulations to Camas senior Faith Bergstrom for being voted SBLive’s WaFd Bank Washington High School Athlete of the Week for April 26-May 2!

The Cal Poly signee registered a double-double – 24 points and 10 rebounds – in a 4A GSHL showdown victory over Union.

Julian Agosto, Nathan Hale: Scored 38 points on 54 percent shooting (and 4 of 8 from 3-point range), dished out six assists and five steals in a narrow loss to Ingraham.

Jalen Johnson, Renton: Scored 47 points in a win over Evergreen of Seattle, vaulting him into the school record books.

Ashlyn Aven, Yelm: The junior led her varsity softball team to an undefeated season with 21 RBIs including 5 HRs. Ending with 14-0 games won for Yelm.

Seth Minor, Skyview: Went 4 for 4 and hit for the cycle in a win over Camas.

Payton Graham, Kamiakin: Fanned 13 batters on his way to throwing a no-hitter and hit a three-run home run (2 of 3 at the plate) against Southridge.

Katie Peneueta, Heritage: Scored 28 points and pulled down 18 boards in a win over Evergreen.

Chlore Flerchinger, Shadle Park: She hit a home run and logged five RBI while tossing eight strikeouts in the first of a double-header against Rogers.

Jaliyah Sampson, Rainier Beach: Finished with 25 points, 16 rebounds and the game-winning free throws in the final seconds in a 48-47 win at Chief Sealth.

Katie Thiers, Roosevelt: The senior post player had a season-high 24 points, 18 rebounds and two blocked shots in a win over Lincoln of Seattle.

Katelynn Gelston, Hanford: The junior uncorked a personal best throw – 151 feet, 9 inches – to take over the state lead in the girls’ discus at an MCC meet last week. It is also the state’s top throw since 2018.

Jake Andrews, Sehome: The sophomore posted the state’s top time in the 400-meter dash, clocking a time of 47.92 seconds in a NWC tri-meet. It was also a personal record.

Mia Hughes, Woodinville: The Montana State signee picked up where she left off from last season, averaging 20.3 points per game in three Falcons’ wins, including a season-high 22 in a win over Bothell.