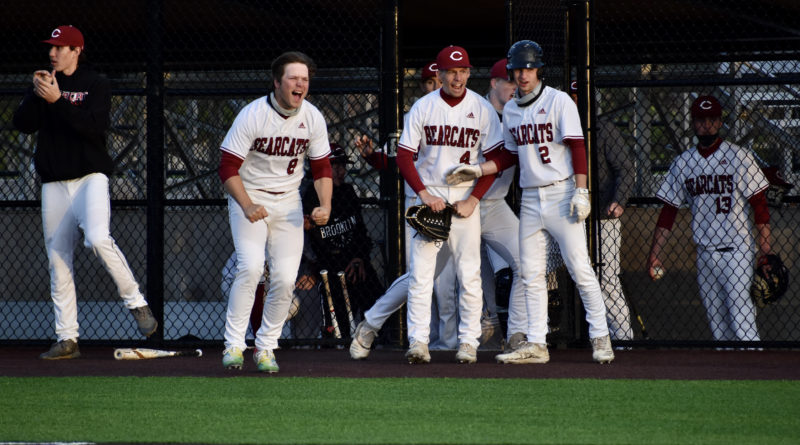 RIDGEFIELD — Sure, W.F. West catcher Drew Reynolds was a little bummed he was walked twice in his last high school varsity game. But the Texas Tech-bound catcher left the Ridgefield Outdoor Recreation Complex on Friday with much more than a couple of hits.

“I wanted to make a difference,” Reynolds said, “but my teammates did it for me.”

W.F. West rode a momentous afternoon semifinal extra inning comeback into a 2A district championship win, beating 2A EvCo foe Tumwater 7-6 in a back-and-forth battle between two of the premiere 2A programs in the state in 2021.

And bringing home the district title trophy — the pinnacle achievement in a pandemic-shortened season with no state playoff — against Tumwater, the team that handed the Bearcats their first league loss in four years last month? (The two teams split the regular season series 1-1)

“We did, we wanted to win it all, and we especially wanted to beat Tumwater at the end,” Reynolds said. “That’s what we were looking forward to and we got the chance.”

“When I saw the hit, all I could think was ‘score, get home, any way possible,’ “Stafford said. “I thought I had it all the way.”

Tumwater pieced four runs together in the bottom of the second. Alex Overbay’s sacrifice fly to center field drove in the first run and Cody Whalen’s line drive single to left field pushed the lead to 4-1.

“To see the emotion in the kids in games like this, that was the part that was missing in league play,” W.F. West coach Bryan Bullock said. “It made a huge difference playing something that felt like a playoff atmosphere.”

Orr, a right-handed Washington State commit, struck out 13 batters, allowed three hits and one walk. He also went 2-for-2 with a double .

“I got my curveball over, struggled to get it over in the first couple innings, but third fourth, rest of the way on it got over,” Orr said. “My changeup was really good today, I use that a lot. I felt good.”

The T-Birds’ lone run came in the fourth inning when Alex Overbay drove Grady Finney in from second base with a single to center field.

The Panthers had runners on first and second in with two outs in the bottom of the seventh when Orr fanned the last batter to advance Tumwater to the district title.

What’s the postseason without a little late-game drama?

The Bearcats loaded the bases while Columbia River led 4-2 with two outs in the bottom of the seventh. That set up senior Brit Lusk’s grounder to left field that drove in Bunker and Max Taylor to close the two-run deficit.

The Rapids (River’s new mascot) were sustained for much of the afternoon by solid pitching and defense. Senior righty Sawyer Parkin struck out two, walked three and gave up a hit and two earned runs in 6.1 innings pitched. Senior Nick Alder, the reigning 2A GSHL pitcher of the year, came in after Parkin hit 98 pitches and gave up four hits.

Lusk went 1 for 3 at-bat with two RBI and pitched the first two innings.

W.F. West trailed the entire game until the walk-off single.