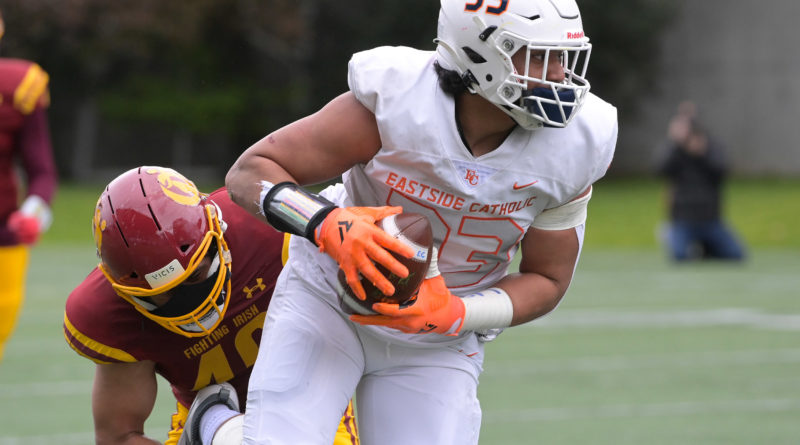 It wasn’t easy, but the shortened 2021 Washington high school spring football season was completed – even without WIAA playoffs.

And now it is time for SBLive Washington to release its all-state football team — spanning all classifications and corners of the state — including individual awards.

The all-state team was compiled by reporters Todd Milles and Andy Buhler.

Is there even a debate? The nation’s top-ranked recruit in 2021 will go down as one of the state’s most dominant two-way players, leading Eastside Catholic to a pair of 3A titles. Also, came back for a senior season when he really did not have to … just because. Will likely pick a college destination among Alabama, Ohio State, Oregon, USC and Washington in early summer.

Yes, he played just three games before enrolling at the UW for spring ball. But did you see those outings? He was spectacular, especially in his final game when he passed for 514 yards and eight touchdowns to set the new WIAA all-time passing-yardage mark at 13,226 yards (and passed for 1,473 yards and 21 TDs this spring alone). Let”s just say Huard and the Lancers’ “Air Raid” attack were a perfect four-year match.

Seems logical to honor the most dominant player – Schuster – from the most disruptive defensive unit in the state. The two-time 2A Evergreen player of the year was simply unblockable, especially this spring when the Thunderbirds moved him all around the defensive line. The University of Minnesota signee finished with eight tackles for loss, including three sacks – and had 34 TFL and 12.5 sacks over his final 20 games.

There are first-rate run blockers – and then there is the heat-seeking missile that comes off at the snap for the Fighting Irish at right guard. The teenager with the vast rugby background was O’Dea’s first starting lineman as a ninth grader during the run to a 3A title in 2017, and has some of the best feet and decision-making you will see on the fly. Signed as a top-15 offensive guard nationally with the Washington Huskies.

Many figured once 5-star 2021 recruit Emeka Egbuka enrolled early at Ohio State, the Steilacoom offense would take a big hit. Brady made sure that did not happen as quarterback Chance McDonald’s go-to wide receiver. In seven games, Brady had 62 catches for a state-best 929 yards and 13 touchdowns – and was on pace for one of the best receiving seasons in state history (if it was a normal season). Signed at CWU.

Longtime coach Monte Kohler doesn’t normally play ninth graders on the varsity team – but this is no ordinary freshman. Flashing a rare combination of speed and power, Brown went from a non-starter in Week 1 to near 1,000-yard rusher by the end of the spring. And he capped it with his 247-yard rushing performance to lead the Fighting Irish over Seattle Prep for the Metro League title.

It is difficult to discern which of these coaches – Maul in his fifth season, and Robak is his second season – did the best job, considering both of their squads were picked to finish third behind two perennial powerhouses in their respective leagues, only to emerge by winning regular-season league titles. Perhaps the real tiebreaker could have happened in a potential 3A state playoff matchup, as both were primed to make deep runs.

It wasn’t the senior farewell Mount Si was hoping for, but the Nevada-bound Millen was terrific for Mount Si before its season was canceled after two games, throwing for 435 total yards and six touchdowns (81 percent completion rate) after a breakout junior season.

After a 1,400-yard season as a junior, the Eastern Washington-bound power bruiser backed that up by repeating as the Mid-Columbia Conference’s offensive MVP this spring.

Whatever defenses tried to do to stop Black – it didn’t work. He erupted for 892 rushing yards and 11 touchdowns in five games, including a school-record 359 yards against Lake Stevens.

In just five games, Squalicum’s standout tailback had the production —1,068 yards, 14 touchdowns, 7.3 yards per carry — many hope for in a full-length season.

Arizona State-bound playmaker finishes as Sam Huard’s most productive pass catcher, and etches his name among the best ever to come from Washington (4,032 yards, 63 touchdowns).

Legitimate two-way standout had a state championship (2019) coming into the season, and leaves having helped the 1A Knights bulldoze through a big school schedule in the shortened season.

There’s speed. Then there’s Merriweather speed. The 4-star had a tremendous season out wide, as well as special teams, where he ran back two kick returns for touchdowns.

The UW-bound Jumper did a little bit of everything for Eatonville during his career (quarterback especially this spring), and the 2A SPSL player of the year leaves a lasting legacy.

Two-way standout played only three games, but continues to show so much growth – physically and understanding of the sport – that Power 5 schools keep offering the big offensive tackle.

Rainier Beach’s season in the Metro League was cut short due to dwindling numbers, but this 5-star guard did get his licks in against Eastside Catholic’s big guys – and wasn’t slowed down.

Remember him? After starting as a ninth grader on Puyallup’s state semifinal season (2018), Iuli shook off an injury-plagued sophomore season to return as one of the premier blockers in the state as a junior.

The top FBS recruit in Class 2B football, Olson put those quick-sliding feet on display for the Tigers once again – and now the all-state offensive tackle has offers from three Pacific-12 Conference programs.

Two years ago, he was just raw power. Now, Ioane has developed into the leader of the Eagles’ road-grading blocking unit, being named the 4A SPSL’s offensive lineman of the year this spring.

He just never leaves the field, and the best skill-position player in Class 2B continued to rack up insane numbers as the Chinooks’ quarterback – 1,105 passing yards, 610 rushing yards and 19 total touchdowns.

Coaches and teammates call him “Chow,” but he leaves fans saying, “Wow” over his strong kicking leg. And after booting 55-yard field goals in back-to-back games this spring, Power 5 recruiters have taken notice.

What a transformation! After finding CrossFit and gaining 35 pounds in the offseason, Brown grew into becoming the driving force of the Bears’ ‘Dark Side” defense – and 4A/3A GSL defensive player of the year.

When you are this level of big athlete, you can roam anywhere – and Ewaliko did for the Beavers. The San Diego State signee had back-to-back seasons of four sacks, and was again named a Metro League first teamer.

Many would go through the motions in a four-game season. Not Johnson, the 4A KingCo’s lone returning first-team pass rusher who killed it off the edge (15.5 TFL, including nine sacks as a senior).

In a league full of havoc-creating pass rushers, nobody was better than this CWU signee, also a two-time 4A SPSL first teamer who had 16 tackles for loss this spring, including seven sacks.

Whether he plays defensive end or outside linebacker at the University of Virginia, the best player in 2A Wesco knows how to make plays in the backfield (12 tackles for loss, eight sacks this spring).

Do you want this bone cruncher coming your way? The all-Metro League first-team middle linebacker is widely considered the top defensive prospect in Washington for 2022 – with multiple D1 offers.

Pound for pound, this co-defensive MVP in the Mid-Columbia Conference might be the hardest-hitting linebacker in the state. He is everywhere, and has started for the Braves since his ninth-grade season.

Very few players get longtime coach Monte Kohler talking glowingly about quicker than this all-Metro League first teamer, who was a tone-setting force in putting the clamps on high-powered offenses.

Running into him in the middle of the Eagles’ defense was like crashing into a wall. He was the tough dude in the front seven – and was voted the 4A SPSL defensive player of the year.

To match up with the elite pass catchers of the Metro League, you need quick-twice recovery skills – and this Air Force Academy signee has that, proving he is the league’s best shutdown cornerback.

This WSU baseball commit is also the West Sound’s best football player, dominating as a dual-threat quarterback, but he also has 23 career interceptions from both safety positions, including a pair this spring.

This two-way, all-Mid-Columbia first teamer is probably a better offensive player – and will play wide receiver at Georgetown. But because of his speed, he shut down big-play threats at cornerback and free safety.

Talking about storming the talent-rich 3A PCL, Wagoner emerged as the league’s best two-way player (WR/CB) – and was voted unanimous player of the year in leading Sentinels to undefeated season.

This all-4A Wesco performer plays rangy “Viking” role on defense – manning center field in the secondary and also stalking the line of scrimmage. He registered multiple interceptions and tackles for loss.

The Mid-Columbia Conference’s special-teams player of the year, Hall’s punting leg (40.0-yard average this spring) can flip field position in a snap. Signed with University of Sioux Falls.