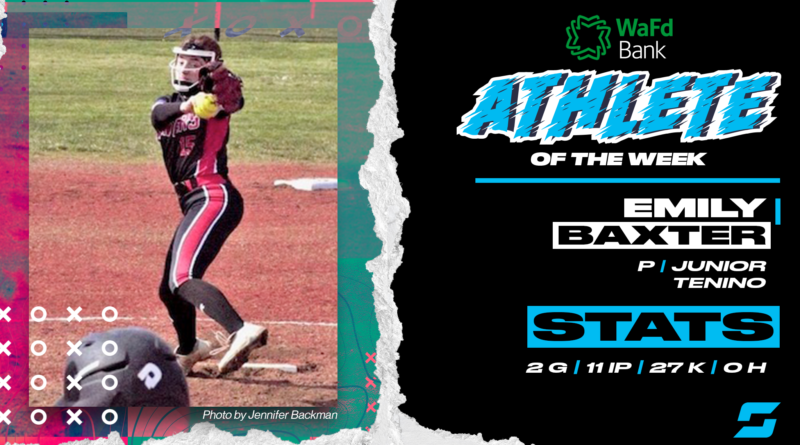 The junior ace pitcher struck out 19 in a seven-inning no-hitter in Game 1, then pitched four of the five innings (eight strikeouts) of a nightcap no-hitter against Elma.

Baxter received 45.76% of the vote, beating out Eatonville’s Hailey Rath who finished second with 33.82%. King’s Carter Cox finished third with 14.19% and Rainier’s Jeremiah Nubbe finished fourth with 4.39%. There were over 25,000 votes tallied this week!

Morgan Flesland, Mount Spokane softball: The Oregon State signee threw a perfect game against Gonzaga Prep, striking out 13 in a 6-0 win. She now has three no-hitters this season, writes the Spokesman-Review.

Hailey Rath, Eatonville softball: The junior outfielder had a near-perfect week in three games of 2A SPSL action – 12-for-14, seven home runs, three doubles and 23 RBI, all victories.

Rachel Sysum, Jackson softball: The ninth grade shortstop is quickly making a name for herself against the Wesco’s best teams. She slugged four home runs and had 12 RBI in wins over No. 10 Kamiak (grand slam), No. 1 Glacier Peak (three-run HR) and Cascade of Everett (two HR).

Sydney Wells, Selah softball: The slugger crushed three home runs and drove in five runs as the Vikings kept their unbeaten record intact with a doubleheader sweep of East Valley of Yakima, writes the Yakima Herald-Republic.

Jeremiah Nubbe, Rainier boys track: The junior uncorked a huge discus throw at Tenino High School – 196 feet – to grab the state leader in 2021 by 18 feet. It was a person-best throw for the Mountaineers’ standout, who also set the all-time junior mark in Washington.

Carson Frawley, Camas basketball: The junior hit five 3s on his way to 25 points in a narrow win at Battle Ground.

Stevan Rodriguez, Eisenhower baseball: Threw a five-inning no-hitter with eight strikeouts in a 13-0 win over Davis.