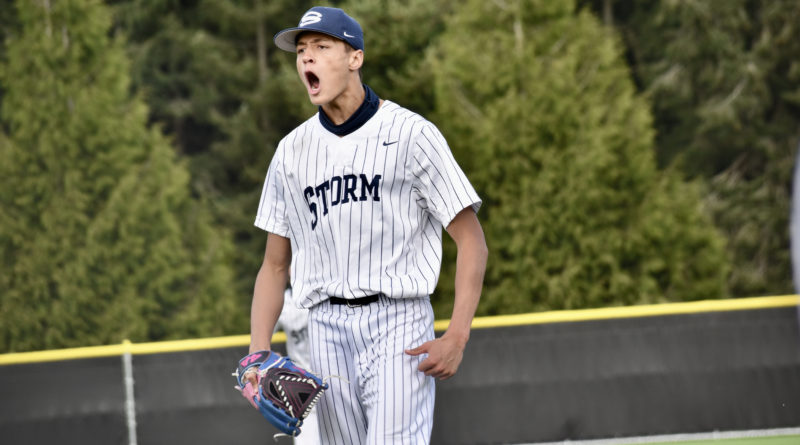 CAMAS — Caden Vire exited the mound yelling, flexing with his fists pumping as he was mobbed by his Skyview teammates. In the second varsity start of his career he had just pitched a one-hit shutout, striking out 11 in a 4-0 win over rival Camas.

The moment came later than anticipated for Vire, a 6-foot-6, left-handed senior who has signed with Arizona State. Since his junior season was canceled due to the coronavirus pandemic, the last time he suited up for Skyview in a meaningful game was two years ago, when he was some 20 pounds lighter, zipping a fastball 10 miles an hour slower.

The potential was there. He just needed to develop.

That’s why he’s been pining for the opportunity to show off the work he’s put in since his sophomore high school season.

“I’m just trying to show everybody how much better I got,” Vire said, “because I hadn’t pitched a varsity inning before I signed, so I come out here on the varsity field to show everyone what I can do.”

Vire came into high school standing six-feet tall. He grew four inches his freshman year, and two more the next year. Since the beginning of the pandemic, he’s put an emphasis on filling out his long, lanky frame, packing on 10 pounds of muscle. He focused on power movements — things like squats, deadlifts and hang cleans — and tracked a progression in the weight room that helped him start to realize his potential in a more filled out frame.

“I really had to grow and learn how to use my body again,” Vire said. “So it took me time to figure that out. But as soon as I did, I got to work.”

Skyview baseball coach Seth Johnson said pitchers who haven’t fully physically developed yet must reach their growth peak before they can start physically maturing. As Vire was shooting up in height as an underclassman, he threw a lower velocity and his control was errant at times, but he showed loose arm action and the ball jumped out of his hand. He brimmed with potential.

“You could see he was on the verge,” Johnson said.

Vire’s progression was both natural and pronounced. He added around five miles per hour to his fastball each year of high school, topping out in the low 90s this spring.

At Camas, scouts logged his peak fastball at 91 miles per hour, and he sat around 87 to 88.

In his first start, a 4A/3A Greater St. Helens League matchup at Mountain View, Vire fanned 11 batters and allowed one hit in four shutout innings in front of a gaggle of pro scouts and radar guns.

The 2021 MLB Draft has been cut to 20 rounds and it remains unclear if Vire will rise to the level of hearing his name called.

But he chose to sign with Arizona State because of its location in a baseball hub as well as the opportunity to learn from pitching coach Jason Kelly, who spent seven years at the University of Washington and has proven he can develop arms.

“He’s going to have a bright future, this is definitely not his ceiling,” Johnson said. “He’s got way more growth ahead of him, maturity-wise, stuff-wise, command-wise, all of those things, he’s still got a lot more in the tank, which is going to be very exciting to see him develop over the next three, four years.”

He’s currently ranked as the 18th-best prospect in Washington from his class, according to Prep Baseball Report. In an evaluation more than a year ago, one scouting service said he features some of the most upside of any class of 2021 arm in the state.

And as dominant as he has been this spring, it’s clear the sky is the limit for Vire.

“There’s a fair chance we’ll see him on TV one of these days,” Camas coach Steve Short said.