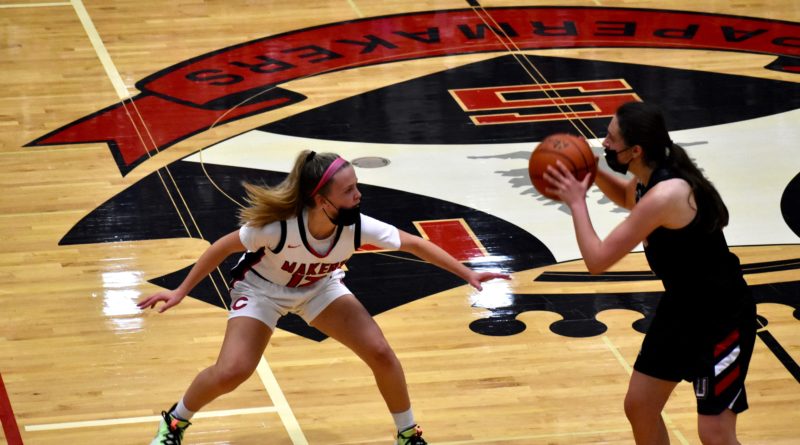 CAMAS – In time, if the pipeline of up-and-coming talent holds up, Camas High School should be in position to do things in girls basketball it has never accomplished in school history.

Including contending for a Class 4A title.

But right now, it is still the seniors’ show – and Faith Bergstrom’s season-high 22 points led the Papermakers to a 60-41 victory over 4A GSHL rival Union on Friday night.

It was a matchup of preseason top-16 teams, regardless of classification (Camas was No. 13; Union was No. 16). And if you broke that out just among 4A programs, both Vancouver-area schools would be ranked in the top 10.

You could argue this game was put out of reach in the first few minutes as the Papermakers made six of their first seven 3-pointers, including four in the first 31/2 minutes by fellow senior Katelynn Forner.

As Camas guards kept feeding Forner in both corners, she kept making them as the hosts built a 22-4 lead by the 2:45 mark.

“That was amazing,” Camas girls coach Scott Thompson said. “We came out, and rode a little heater.”

Known more for her defense, Forner’s shooting form has consistently improved. Two years ago, she shot the basketball two-handed. Now, she is the team’s most efficient perimeter threat.

“Hours of work,” Forner said. “It’s still getting there. It’s a work in progress.”

After that, it was constant pressure as Camas rolled in new players every three or four minutes, utilizing a 10-player rotation with a mix of experience and talented ninth graders.

“Our whole thing, we’ve got so much depth,” Thompson said. “If we are playing just 5-on-5, we could lose because somebody else might have a better lineup on the court. But if we can find a way to make our 10 (players) beat your five by wearing you down, pressing you and playing with tempo … we will do that.”

Titans’ standout Lolo Weatherspoon, who led her team with 13 points, said Camas’ constant pressure took Union “out of our norm and had us frazzled.”

The Titans scored the first five points of the second half to quickly cut it to 36-24 with 6:28 remaining.

But two Bergstrom buckets sparked an 8-0 Camas run, and the Papermakers never looked back. The Cal Poly signee tallied 16 of her 22 points in the second half.

“Hey, it was Union – our rival,” Camas point guard Anna Mooney said. “We always get excited.”