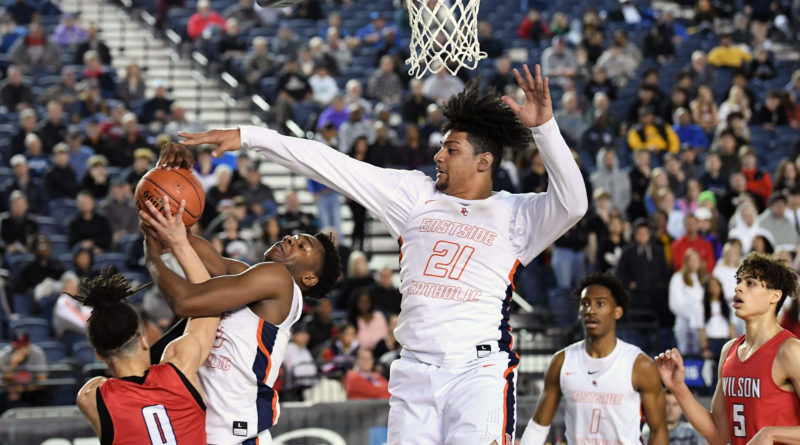 Brent Merritt doesn’t hesitate when asked if a win over Garfield gives him a little something extra to celebrate, since the Bulldogs bounced the Crusaders in the 2019 3A state championships the last time the two teams faced off.

“They still have that gold ball,” Merritt, Eastside Catholic’s head coach, said. “This doesn’t redeem it. Any time you beat Garfield it’s great, it’s good to get a win, but it doesn’t take away from that last year.”

A win is a win, he concedes. Especially when it comes against the defending 3A state champs.

Eastside Catholic (2-0) outlasted Garfield 68-64 on Friday night at Garfield High School. J.T. Tuimoloau, the nation’s top-ranked football recruit in the class of 2021, had no issue picking basketball back up. In his season debut, he scored a game-high 21 points off the bench, and converted a three-point play to put the Crusaders up four with just over a minute left.

Since Tuimoloau played in Eastside Catholic’s condensed football season, he joined the basketball team late and missed Wednesday’s season-opener. After logging his fifth practice Thursday, Merritt was ready to plug him in off the bench — and Tuimoloau made an immediate impact, just like he did in his 2019-20 season debut in the Les Schwab Invitational.

“He always looks fresh off of football,” Merritt said. ”It’s never any issue for him.”

James Laurence added 12 points for the Crusaders and Jacob Cofie scored 10 for the Crusaders. Garfield guard Raphael Justice’s 15 points was a team-high. The Bulldogs are missing all-state caliber guard Koren Johnson, who has opted to play in tournaments out of state recently.

Garfield led 41-32 at halftime, but the Crusaders cut the lead to one possession in the first few minutes of the third quarter. Eastside Catholic led by as much as eight points, but the Bulldogs persisted.

“I thought we were in control, but they just played tough,” Merritt said. “They just willed it, played hard.”

With big pockets of the state in danger of sliding back into Phase 2 of the state’s pandemic reopening plan, a cloud of uncertainty looms over the high school basketball season — King County included.

State officials reassess COVID metrics on Monday and are set to announce the results Tuesday. King County is in Phase 3, which is the only phase that allows for basketball games to take place due to its high-risk designation.

Nevertheless, the first week of the Metro League season charged on with a full slate of games on Friday night.

“It’s kind of up in the air,” Merritt said. “We haven’t talked about it. We’re just concentrating on the games now.”

“He’s ridiculous,” Ingraham coach Joe Hardy said. “It’s so fun to watch. He elevates so much on his jump shot.”

Added Hardy: “It’s been close games with (Hale) for the last four years. All credit to (Nathan Hale coach Dom Brooks) for turning this into a huge rivalry.”

Puetz, a 6-foot-1 senior guard, was named captain in an offseason the Rams spent at least part of practicing outside, running in rain, snow and whatever else it took to stay connected and in shape during pandemic shutdowns.

“He’s been waiting years for this opportunity,” Hardy said of Puetz.

Down four players, all of whom are among Seattle Preps’ biggest players on the roster, coach Mike Kelly knew his guards would need to bring it in Friday night’s season opener.

They answered the call.

The Panthers forced 18 turnovers, while only coughing up the ball twice all night.

“Our guards made them uncomfortable,” Kelly said. “I don’t know if I’ve ever coached a game where my tea has had two turnovers.”

Seattle Prep scratched what would have been its season-opener against Bishop Blanchet on Thursday due to COVID-19 protocols. Three of the four rotation players who remain sidelined are 6-foot-5 and taller, including sophomore Jack Velling and standout junior guard Tyler Mrus.

The Panthers jumped out to a 12-2 lead and didn’t look back. Ballard cut the deficit to 13 at half, but Prep pulled away in the third quarter.

Max Debiec scored a game-high 15 points and was one of five O’Dea players to finished in double figures in a lopsided win over Chief Sealth.

Owen Moriarty scored 12 points, Mason Williams had 11 and Jaylon Ellis and Miles Clark each added 10 for the Fighting Irish. Down 5-star senior Paolo Banchero, a Duke signee, and Creighton-bound sharpshooter John Christofilis, O’Dea moves to 2-0 on the season.