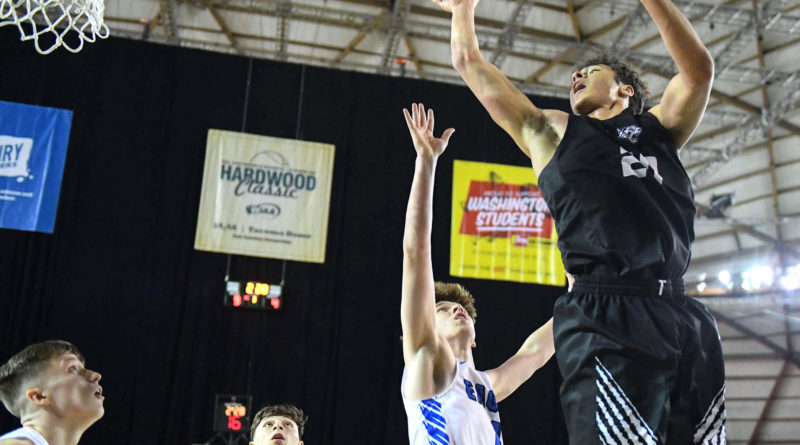 He just might do damage in your gymnasium – literally.

After being hounded, and held in check for much of a GSHL game Friday night at Heritage High School, the springy 6-foot-9 senior finally got unhinged in the fourth quarter, scoring 16 of his game-high 31 points in the final five minutes of a victory.

The highlight during that scoring spurt came on a breakaway dunk.

Just seconds before the play, Perry had gotten into a war of words on the other end. Needless to say, he had a little steam behind him.

“He doesn’t get too many fastbreaks,” Battle Ground boys coach Manny Melo said. “But he got on the loose, and I said, ‘Please God, do not get hurt.'”

The only hurt came on the rim as he flushed it so hard, the noise resonated throughout the gymnasium.

And after he came back down, an astonished hush circulated throughout the venue. The rim was bent.

“He ripped it so hard, it probably hypertextended (the spring) on the inside because it did not bounce back up,” Melo said.

Five seconds later, folks in the grandstands began pointing at the basket, talking and laughing. The Battle Ground team met Perry at the score’s table to cheer the play.

Perry gave a slight flex of the arm.

“He has put on 15 to 20 pounds since last season,” Melo said. “We have lifted together literally every single day.”

Seeing the damage, a Heritage player fired a basketball up toward the rim – and nicked it perfectly back in place. The game finished up.