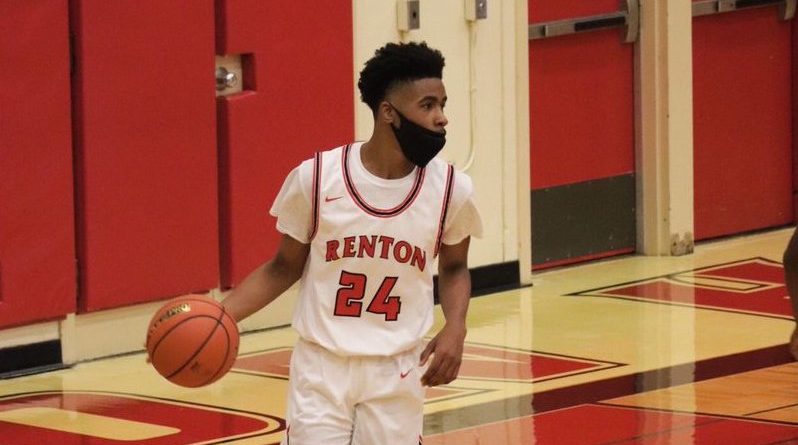 Renton senior Jalen Johnson had a tough time going to sleep Tuesday night. His body was rushing with adrenaline, and his phone lit up with a constant stream of texts and well wishes on social media.

Even longtime NBA star Jamal Crawford, who has a set of outdoor courts dedicated to him in Renton, followed him on Twitter — a sign to Johnson one of Seattle’s basketball legends had taken notice.

Johnson scored 47 points in a win over Evergreen of Seattle earlier that night, which is believed to be the highest single game point total in school history, according to head coach Rashaad Powell.

The 6-foot-2 combo guard, hit six 3-pointers and scored at will steadily, with 26 points coming in the second and third quarters combined.

“He’s really come into his own,” Powell said.

Powell spent days reaching out to former players and is confident Johnson broke the record. Andre Stewart thought he scored 49 points in 1993 game against Rainier Beach, until teammate accounts and a newspaper archive suggested he’d scored 42. Vershan Cottrell scored 46 points in a game in 2002 and Raleigh Fletcher scored 41 in 1999.

Despite an imperfect record-keeping system, Powell, a Renton grad, is comfortable calling Johnson the top single-game scorer in program history.

Powell has worked with Johnson to fine-tune his game over the last two years, helping him become Renton’s No. 1 scorer. He transferred to Renton after playing his freshman and sophomore seasons at Rainier Beach. Since then, Johnson’s eagerness to be coached and willingness to be held accountable — on and off the court — has stood out to Powell.

“I’m impressed with his improvement from last year to this year all-around,” Powell said. “He’s playing within the flow, the rhythm of the game, not forcing things and taking advantage of things.”

Tuesday night was no aberration. Johnson scored 31 points in Renton’s season-opener against Tyee.

Renton is 4-1 playing a 2A KingCo schedule.