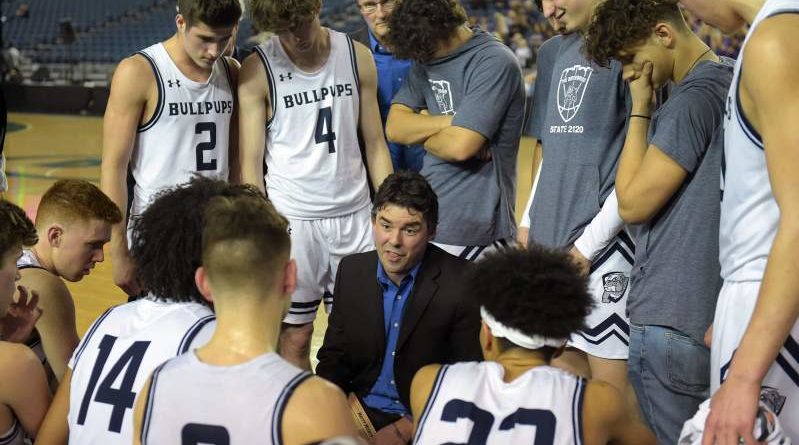 His Gonzaga Prep boys basketball players stand and stare as coach Matty McIntyre steps onto the Spokane floor, his body aged but his confidence steady.

He values defense and taking charges at maybe the most successful 4A basketball program in the state over the past decade since he’s taken over. But McIntyre won’t ask players to do what he won’t. So the first drill of the year, McIntyre surrenders his body in front of a barreling senior to take the season’s first charge.

“I got to be honest, this year I kind of thought twice about it,” McIntyre laughed. “I’m getting older and more out of shape. But I took it and the kids ran over and picked me up and started celebrating.

“Those are fun moments when you can sort of build the culture.”

In the meantime, McIntyre has also helped build a program that has won three state titles since 2011 and reached the Final Four five times since he took the reins from his former coach, Mike Haugen, in 2009.

He joined SBLive’s The Prep’s Lab with TJ Cotterill to talk about building toughness in a program and getting players to buy in to being program- and team-first using his Defining Dozen. He also talks about how Dick and Tony Bennett influenced his Pack Line defense and how he’s continued to have success with it as more programs evolve into “modern” basketball strategies, playing with pace and space.

22:10: How to get talented players, and players who have to start or they’ll be a problem, or have to be on varsity of they will be a problem, to buy into a team-first philosophy and sacrificing

33:00: Handling players who participate in other sports and sharing athletes – why multi-sport athletes benefit basketball programs

“I’m proud that we don’t just talk the talk. We put a ton of time and energy into our defense.”

“We love to take charges. So every year I say, ‘I get to be the first one to take a charge. We get one of the seniors to get out there and bowl me over. I got to be honest, this year I kind of thought twice about it. I’m getting older and more out of shape. But I took it and the kids ran over and picked me up and the kids started celebrating. Those are fun moments when you can sort of build the culture. And I don’t like to ask the kids to do things I’m not willing to do.”

“If a kid makes a 3-pointer, we’re happy. But if a kid takes a charge, everybody is screaming, on the bench, standing up, pumping fists. That’s probably another way we develop our culture.”

“I think of our defense like a puzzle. You get the pieces together, but if one of the pieces isn’t working then the entire thing looks pretty unfinished, looks pretty bad. That’s a message we ask our kids to buy in to.”

“We ask our kids to be counter-cultural in some ways. To push back against these social norms or expectations that young people face. I hope that’s a message that resonates with them the rest of their lives. It’s OK to be different.”

“We’re not usually going to have the athletes. I’ve been blessed to coach some really, really good athletes. But some of the teams in Tacoma and Seattle are just more athletic than us. So we have to play a style that’s different. We can’t run up and down and play fastbreak basketball. So that’s why we’re very much in that Tony Bennett mold of slow it down, control possessions. That’s how we thought we would be successful, especially against the best teams. We can’t try to run with Federal Way and Garfield to be successful.”

You have to marry your defense and your offense to what you’re trying to accomplish. If the other team is going to shoot in the first seven seconds and then try to work for 30 seconds on the defensive end while the other team is working the shot clock down, I can imagine that would get pretty frustrating as a player. That you are exerting all of this energy (on defense) and then up goes the shot quickly (on offense).”

“Being different is how you be successful.”

“I see (immediate satisfaction) becoming more prevalent than 10-20 years ago. Expectations have changed. What we do is we try to be honest and we recognize that, hey, this isn’t for everyone here. This is the way we do things and I have lost good players because they aren’t getting promised playing time at an early level.”

“The process, the patience – Parker Kelly, Chris Sarbaugh, all those kids played on the freshman team with their buddies and in hindsight I don’t think they would have changed that. They enjoyed those moments. But I do feel the pressure coming into the high school game. I don’t know who is promising these kids, but they hear, ‘Man, I’m really good.’ Maybe by their personal trainer or their AAU coach. And sometimes it falls on their high school coach to be the bearer of bad news, maybe because we’re not getting paid as a personal trainer if I’m being honest. I think there’s a little more pressure being a high school coach than in these other arenas because you have to be honest and you have to have these hard conversations, and if it’s the first time a kid has had that it can be difficult.”

“It’s a shift of the person’s mindset or mentality not to run from the competition. If you are truly going to be awesome it’s something you should welcome. Too often they need to feel validated by being on varsity or being in a certain role or whatever the case might be.”

“(On leadership development): I don’t put a lot of emphasis on that. Early on it was important we did those things. As the years have rolled on I’m not convinced it’s effective use of my time and energy. It goes back to our Defining Dozen — you’re expected to behave and be a leader in all these areas of your life. If you buy into that, then walking down the hall you’re a captain. You’re not just the captain when you walk out before the game to meet the officials. That’s just drawing attention to yourself. Is that meaningful to you? That’s something we’re trying to work away from.”

“There have to be leaders in different realms of our team. Even if he’s the 12th guy, he’s expected to be a leader on the team in his role.”

“One of my worries is things have become so organized and so direct that kids have forgotten how to organize on their own a 5-on-5 run at the park. That’s part of growing up – problem solving … there’s things kids can gain on growing up and being an adult that come with those moments where they have to do it.”

“I’m not pleased when we try to make kids play our sport. That’s self-centered. I don’t think it’s good for young people. I get the 10,000 hours and being perfect, but I wrote my master’s thesis paper on this – playing multiple sports. The data shows kids are no more likely to get a college scholarship by focusing on one sport and burnout is increased by doing this.”

“I think football kids make the basketball team better. Going 1-on-0 and doing all these drills, that’s good. That’s cool. I’m not against that. Kids need that. But at the same time there’s a physicalness that comes from playing football or baseball that translates.”