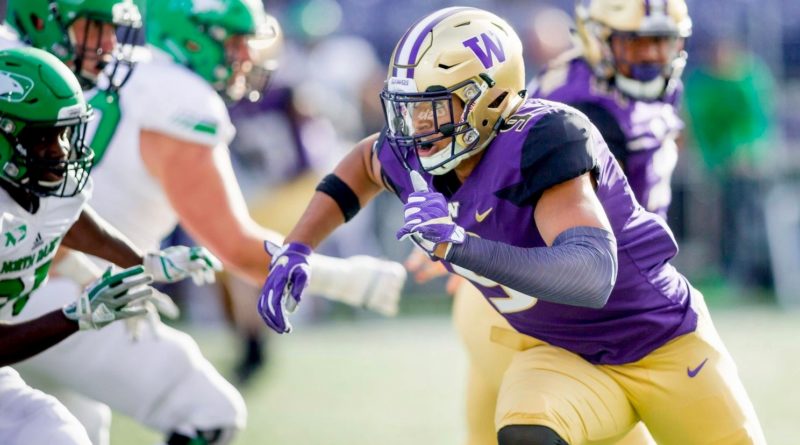 The 2021 NFL Draft starts on Thursday in Cleveland, Ohio, but only a handful of former Washington high school stars are projected to be taken over the three-day, seven-round draft.

Contributing Fox Sports NFL Draft analyst Rob Rang offers a scouting report on each player and projects where they will potentially be selected during this weekend’s draft.

The skinny: Yes, this former 4A NPSL lineman of the year certainly looks the part – and it is obvious Tryon spent the opt-out year from University of Washington football toning up his already-impressive, NFL-ready physique. “He is well-built with naturally-broad shoulders,” Rang said. “He is a strong, athletic type of guy.” With his long arms and quick-twitch movement, Tryon is a natural edge pass rusher. Technically, he is raw but with high upside. Rang views Tryon similarly to former University of Texas-San Antonio product Marcus Davenport, who was a first-round selection of the New Orleans Saints in 2018. “He’s one of those guys just scratching the surface,” Rang said. Made 12 starts for the Huskies in 2019, and recorded eight sacks as a second-team all-Pacific 12 Conference performer – and was on various preseason All-American lists before deciding to sit out last season.
Best NFL position: Defensive end.
Rang’s draft prediction: Top-50 pick, and solidly in second round (with potential as late first-rounder).

The skinny: There was no better offensive tackle prospect coming out of high school in 2017 than Sarell, who captured various All-American honors as a a top-15 recruit nationally. But now, for whatever reason – injuries or fit in Stanford’s drive-blocking style – he is just looking to land on a pass-friendly NFL roster. “Stanford’s track record of producing offensive linemen will help him,” Rang said. Sarell missed most of the 2018 season because of a serious knee injury, but returned to start 17 games the past two seasons (and was honorable mention all-Pacific 12 Conference in 2019).
Best NFL position: Right tackle.
Rang’s draft prediction: Late sixth round to undrafted.

The skinny: He goes by “LongSnapFletch” on his Twitter account, and Fletcher – who started his prep career at Skyview before transferring to IMG Academy in Florida – is trying to join the Alabama-to-NFL long-snapper fraternity this weekend. He never mishandled a snap during his Crimson Tide career, and was named the Patrick Mannelly Award winner as the nation’s top long snapper. “This is the best center class in maybe 20 years, so that might push him down the board,” Rang said. “But he’s got a chance.” Father, Tom, had brief NFL career, including stint with the Seahawks.
Best NFL position: Long snapper.
Rang’s draft prediction: Seventh round to undrafted.

The skinny: Wedington doesn’t possess ideal NFL size, and isn’t a refine route-runner. But his body control, especially in traffic, screams huge potential. And if teams aren’t enamored with him as a catch-and-dash inside receiver, he could be intriguing as a kickoff-return specialist (he was one of the NCAA leaders in 2019 at 28.1 yards per return). “The wide receiver group is stacked, but his positional versatility should help him,” Rang said. “And coming from Stanford’s pro-style offense, and high academics, there is no worry about his ability to understand an NFL playbook.”
Best NFL position: Slot receiver and special-teams returner.
Rang’s draft prediction: Late seventh round to undrafted.

The skinny: As the youngest of three D1-playing brothers, he certainly has a high level of pedigree. And he did play in 29 games with the Huskies after transferring home from Temple University, including three starts in the COVID-impacted 2020 season. “He has a lot of traits you look for,” Rang said. “He uses his hands well. He is a tough guy and he is reliable.” Biggest question is – does he have a signature athletic distinction to make an NFL roster?
Best NFL position: Defensive tackle.
Rang’s draft prediction: Likely undrafted, but possible “Mr. Irrelevant” (last pick of draft) candidate?