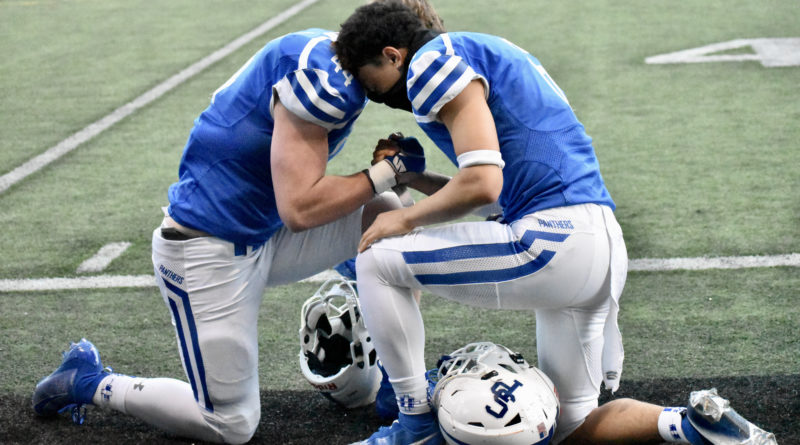 O’Dea and Seattle Prep had a sunset ending to the spring 2021 high school football season.

On Friday night, the Fighting Irish beat Prep 49-7 in the shadow of a sunset-kissed Space Needle inside Seattle’s Memorial Stadium. They played for a Metro League title, the culmination of a four-team league-only playoff — the pinnacle of achievement in a season with no WIAA state playoff.

The shortened season wasn’t easy. And we knew it wouldn’t be. Games were zapped by coronavirus flare-ups. Some teams went into quarantine. Some had seasons canceled midway through.

As the pandemic-shortened spring high school football season comes to an end in Washington, I think it’s important to reflect on two things: what it took to get here, and what was achieved in six meaningful games.

While covering the lead-up to the spring season, and nearly every week since, I’ve posed a question to athletes and coaches across the state. It’s a question that I’ll admit, was a bit loaded. It went something along these lines:

In this shortened season, what is there to play for?

Answers ran the gamut, but shared a similar throughline.

“Our biggest drive would probably be us just loving to play with each other, and all of us being competitors, not wanting to go out and lose to anyone,” Puyallup senior Luke Holcomb said in early March. “We’re definitely trying to take hold of the moment of ‘this is our last year of high school football’ and that’s a pretty important thing.”

The reason I asked the question wasn’t to suggest there is nothing to play for without a state championship on the line. The opposite, in fact.

The answers cut to the heart of why high school sports remain important, even when they took a necessary backseat to mitigating the spread of COVID-19 and saving lives.

High school sports were shut down for the better part of a year in Washington as the state, country and the world at large responded to the still-ongoing coronavirus pandemic.

Many coaches, especially those who hold a significant influence in the lives of their players off the field, worried about the lack of in-person connection they were able to have with kids.

Some lost sleep over how their players were managing.

More than one life was lost to suicide.

So when I saw Seattle Prep’s bench whoop and holler throughout Friday night’s Metro League title game – and O’Dea players celebrate the win on the field with one another – I thought of all the athletes who got those opportunities this spring.

I thought of Holcomb, who got the chance to play one last season — a season he’d talked and dreamed about with classmates since his youth.

I thought of Camas QB Jake Blair, who did the same after fighting through two season-ending collarbone fractures, holding positional lifting sessions in his garage all summer and who put it all on the line one last time with his teammates, willing the group to a season-defining overtime win against Skyview.

I thought of the Student Athletes of Washington (SAW), the student-organized group comprised mostly of football players.

I thought of Sam Huard, the 5-star quarterback who set the all-time state passing record in four games and a day later rode off into the sunset by early-enrolling at Washington.

It wasn’t the record that kept Huard from making what would have been a reasonable decision to enroll at UW for the winter quarter and skip out on his senior season, like Lincoln’s Julien Simon did at USC and La Salle’s Ryan Kershaw did at Washington State.

If you want to hear Huard, who was a part of the SAW group, talk about what his teammates mean to him, just tune into about every interview he’s given. He does a thorough job making that clear.

On the day he broke the record, his dad, former Husky and NFL quarterback Damon Huard, took it a step further.

“What is really special is the opportunity to get to play,” Damon Huard said. “I didn’t know if I was ever going to get to see him wear the Lancer red again (because of COVID-19), and that was a tough deal for our family. Sam held out hope.”

For every Sam Huard, there are hundreds, if not thousands of athletes across the state who share that sentiment, and wore it on their chests on the field of play these last several months.

That’s worth celebrating as the season comes to a close, and new ones in other sports begin.

It was treated as such for O’Dea senior Owen Prentice and his teammates after the 49-7 win over Seattle Prep.

“I’m just thankful we got the opportunity as a team to go and finish it out,” Prentice said.

Do you have an inspirational story of how an athlete responded to the pandemic? I’d love to hear from you. Contact me: andy@scorebooklive.com.