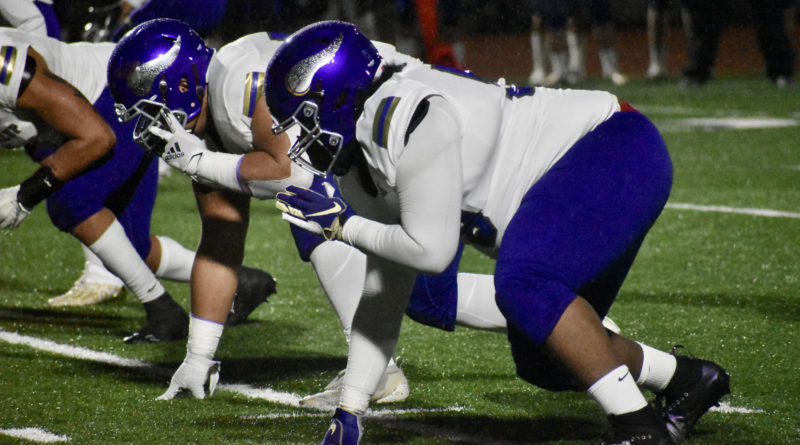 Are blue chip recruits like O’Dea’s Owen Prentice and Beamer’s Malik Agbo on a track to Power 5 greatness? Which small school linemen are good enough to play at any level?

We’ve taken a position-by-position look at some of the top players in Washington high school football during this shortened spring 2021 season. Our next list focuses on the most impactful offensive linemen in the state.

Some of the biggest college football name brands are bidding for the offensive tackle’s talents and the versatility of his rare combination of size and speed.

After trying his luck in several position groups, Anderson hit a growth spurt and packed on the brawn to play on the offense line, where he separated himself and is now headed to play at Eastern Washington.

He’s a blue chip national recruit and a program cornerstone who has Division I size, speed and footwork that translates onto the basketball court.

Remember this name. As a sophomore, Cox was named 2A SPSL lineman of the year in a league full of good linemen.

First team all-SSC interior lineman has contributed to a playoff run as a junior, an undefeated 2021 spring and leaves for Central Washington a versatile interior lineman who has found success in wrestling and track, too.

North Creek’s first ever Division I commit has a massive frame and light feet that make him versatile. He’s played left tackle for the run-dominant Jaguars, but could slide over and play guard or center at Utah.

Valparaiso signee took the prolonged pandemic-induced offseason to retool his body, mind and hold the Storm together in the trenches.

After an injury sidelined him for his junior season, the even-keeled Central Washington signee bounced back with a strong spring season. “When he gets ahold of someone on a down block, they’re gone,” Wildcats coach Terry Cloer said.

In a 4A SPSL very with imposing O-lines aplenty, the right tackle was a first team all-league pick and rounds out one of the most imposing offensive lines in the state.

Montana Tech signee was a lead blocker in a Vikings offense that moved the ball like few others.

Of the entire front that coach Gary Jeffers called “the best offensive line I’ve ever had,” Ioane has drawn the most college interest. Coaches named him 4A SPSL offensive lineman of the year.

After missing his sophomore season recovering from meniscus surgery, Iuli showed why high-level Division I are bidding for his services, paving the way for Puyallup’s run game and giving QB Luke Holcomb plenty of time to operate.

California-bound South South Conference lineman of the year is a multi-year first team selection and the latest in a tradition of strong Yelm fronts.

Transitioned seamlessly from tight end onto the line after a growth spurt — left tackle on offense — and was named co-lineman of the year in the MCC.

Has the same athletic tools of his older brother, UW’s Geirean Hatchett, and has upped his game in the weight room, and showed immense versatility as an inside lineman.

He’s headed to Washington as a walk-on defensive lineman, but he was also a first team all-NPSL first team and blocked for Sam Huard and the Lancers’ air raid offense.

After being named to AP’s 1A all-state first teams a junior during the Knights’ 1A title run, Medina returned and dominated both sides of the ball in a localized big school schedule. He paved the way for a prolific multi-dimensional offense at left tackle and was named the team’s defensive MVP. “He exceeded my expectations,” Royal coach Wiley Allred said. “Never took a down off.”

He’s on track to be a three-year starter on O’Dea’s line, and when it’s all said and done, he’ll have his pick of Pac-12 options.

Don’t let his humble, affable demeanor fool you – Olson is a two-way force with little bark and lots of bite. The Tigers’ prolific run game starts with him.

Four-year starter, All-KingCo center/guard has quick hands, quick feet and is going the prep school route in hopes of boosting his recruitment.

Big, wide body with a really high football IQ. Started on defense as a junior, and made a jump to a two-way all-4A Wesco pick as a senior.

Size, strength and ability to finish plays with, as Monte Kohler calls it “a little nasty in him,” separates the Washington commit among a loaded OL talent pool statewide.

Going to Eastern Washington as a center, but moved around the line and was an anchor on a Falcons team replacing a lot.

A fixture on the line during the Crusaders’ two consecutive 3A state title runs is Princeton-bound, and impactful against the pass rush and in the run game.

All-league first team and all-state honorable mention and boasts a motor that can take him even further beyond Riverside City College in California.

Sacramento State signee was a three-year starter and key cog in the Knights’ run-heavy triple-option offense.

Multi-sport athlete signed with Central Washington, was a first team Everett Herald All-Area pick as a junior and an all-area caliber interior lineman.

Standout junior was named conference co-lineman of the year and received first team all-MCC honors on both sides of the ball.

He makes his presence felt on both sides of the ball, but Vincic is the cornerstone of Bothell’s line at left tackle and the Pac-12 has taken notice.