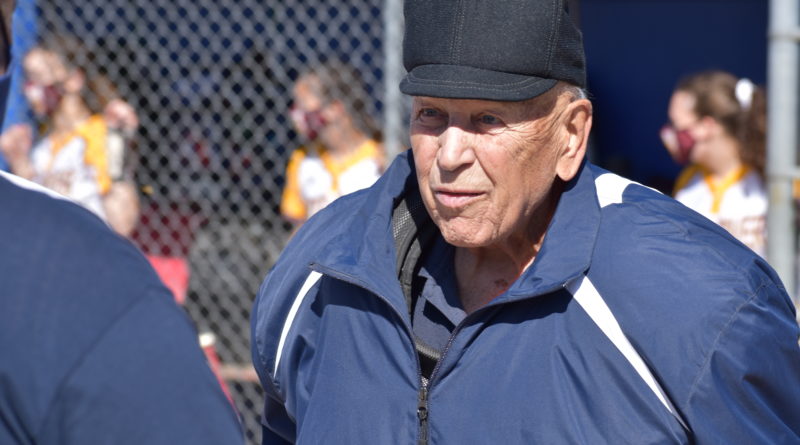 Even after surviving a stint in the Korean War, and then three heart attacks, Richard Oliver “Dick” Hassan figured he would still umpire softball until he was 95 years old.

“This is my area,” the friendly New York native said Thursday.

And that is when the Washington Officials Association’s oldest active game referee said goodbye.

Hassan, 89, was the home-plate umpire for one inning at the White River-Washington softball game, then retired – effective immediately. He was given a bouquet of flowers from a player on both teams, and congratulated for his service.

If it was up to his mind and spirit, Hassan – who is seven months from his 90th birthday – said he would have continued on. But he admitted because of his physical health, he just could not umpire anymore, ending nearly 77 years of enforcing the rules of sports.

“(Retirement) came around a little bit faster than I thought it would, mainly because of the pacemaker I have,” Hassan said. “So I am out.”

It is rare, but not totally uncommon for the WOA to have officials work into their late 80s – or later. Okanogan’s Clyde Pock is the latest example – he retired last year in his 90s after 65 years of officiating in that area.

When those types come around, they are often not forgotten.

Hassan grew up on a big farm in upstate New York, and started to not only organize weekend sports tournaments on the property for a mixture of family and Civilian Conservation Corps (CCC) workers, he also officiated softball, soccer and volleyball games starting at age 12.

Eventually, that worked into small-time paying gigs in youth sports – at 75 cents, plus a bottle of Coca-Cola.

“I was fortunate … that I had the ability to sleep just two or three hours a night,” Hassan said. “I was always looking for things to do.”

A cousin of former World Series championship reliever Elroy Face, of the Pittsburgh Pirates, Hassan got looks from professional baseball scouts as a centerfielder at New Lebanon High School. Instead, he decided to pursue a legal career – and enlisted in the U.S. Air Force in 1951.

Throughout his military service, which included time at McChord Air Force Base, he managed all-star squadron teams, and officiated volleyball in three different countries. He also is considered one of the founding fathers of T-ball.

When he settled in Washington, he was a slowpitch softball umpire all over the South Sound. That led to being a semi-professional football referee – and then on to volleyball and fastpitch with the WOA since 1986.

In all, he has umpired 39 no-hitters in both baseball and softball, including 11 perfect games. He also worked a 27-inning game once.

“Especially in his early years, he was a very good softball umpire,” said Paul Souza, the Washington High School softball coach who has had Hassan work his games for the better part of two decades. “He was very reliable and consistent.”

Hassan has also hosted softball tournaments to raise money for the 414 scholarships he has presented to high-school athletes, and funded the building of fields all over western Washington.

“The man is a humanitarian,” Souza said.

But on Thursday, he was an outgoing umpire for one 15-minute first inning.

How did he feel walking off the field?