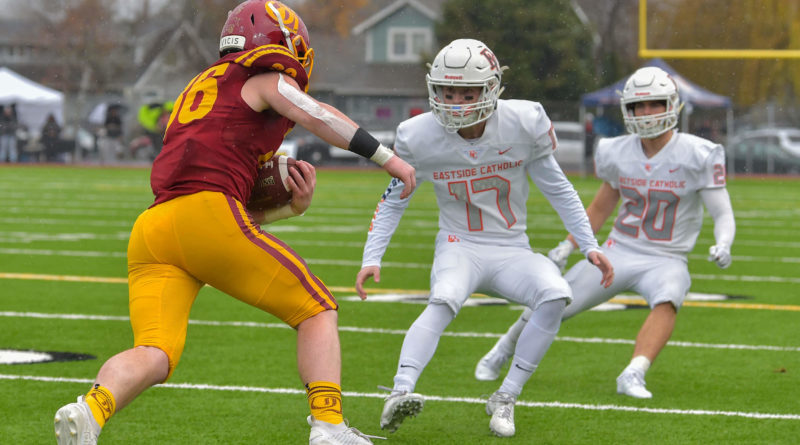 We’re taking a position-by-position look at some of the most impactful players in Washington high school football during the spring 2021 season. Our next list focuses on the best tight ends in the state, based on what they’ve done on the high school stage as a whole and impact this spring season.

Washington-bound tight end transferred in from Wilson and showed his great downhill speed, size and athleticism as a top pass-catcher for the Abes.

Northern Arizona signee is a big target over the middle with soft hands and breakaway speed. Great and necessary blocker in O’Dea’s run-heavy offense who can make a play when the Irish need him.

San Diego State commit is a big target with soft hands who is tough to bring down in space and provides the Beavers a reliable option over the middle.

He’s lined up at wideout in Eastside Catholic’s offense, but projects as a college tight end. George retooled his body, sharpened his focus and has emerged as not just a team-voted captain, but also a reliable short-gain threat and a primary option for Navy-bound QB Kobe Muasau.

Three-year standout and two-way all-Metro League selection will bring his sure hands and brute strength to the gridiron at Dartmouth.

The physical tools he possesses are rare, as is his understanding of the ins and outs of the game (he’s the son of former Archbishop Murphy coach Jerry Jensen). Built like a tight end, Jensen plays like a jumbo receiver. And he can really block and was one of UW-bound QB Tyson Lang’s top targets.

He’s used more as a wideout in Scott Biglin’s offense, but make no mistake – Jones has the size, speed and hands to be a tight end at his soon-to-be home Eastern Washington.

Washington early enrollee used the size and speed the Huskies will use at tight end to do a little bit of everything for the Cruisers. A two-time league MVP and an all-state all-purpose pick in 2019.

On a team loaded with weapons that deploys a Wing-T designed to wear you down, Otton is a cheat code over the middle and a future D-I player. Younger brother of former T-Bird great Cade Otton, now a standout tight end at Washington.

Defenses must pick their poison lining up against a massive Tumwater front, punctuated by Terry, a multi-year two-way standout who is a three-star recruit with lots of Pac-12 interest.

Remember this name. The big-bodied target turned high-level Division I potential into a high-impact sophomore season for the Chargers.

First team all-Metro League pick got first offer from Fresno State as tight end and turns heads nearly every day in practice with his versatility and enormous frame. Landed an Oregon State offer late in the spring season.