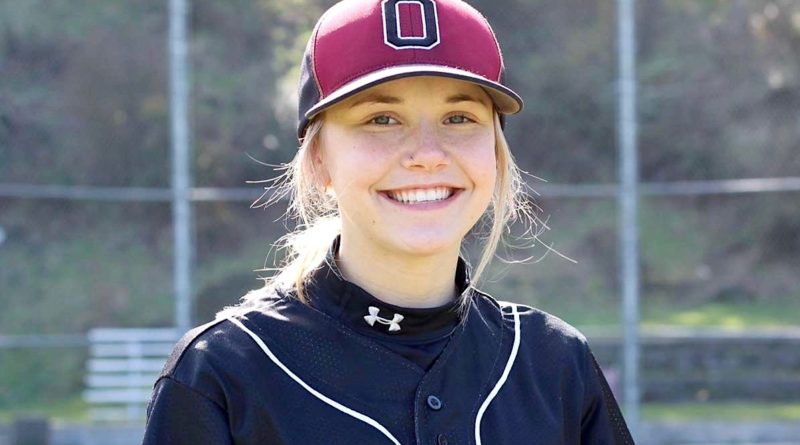 WESTPORT, WASH. — The Ocosta High School baseball group is smaller this spring, which makes it easier to spot spunky senior Kjirstin “K.J.” Hopfer on the diamond.

Growing up, she rarely ever went to the city’s premier ballpark – Grand Army of the Republic (GAR) Ball Park – where the Wildcats play home games mainly because she was traveling all around the state with high-level softball teams.

Now, it is her home. It is where she peppers line drives into a much bigger outfield than she is used to – and where she makes fielding tough ground balls look fairly routine.

Hopfer will return to her blossoming career in softball next fall when she joins the University of San Diego team on scholarship.

But for now, she will finish up a three-year run (and only two seasons because of COVID-19) with the baseball team – one she has thoroughly enjoyed being a part of.

“I had everything handed to me in softball,” Hopfer said. “So coming here and having to work for a starting position, that has been a really good growing experience.”

She was an all-2B Pacific League shortstop at Ocosta as a ninth grader in 2018, hitting .511 with 22 extra-base hits for a team that captured the league crown, won 22 games and reached the state semifinals, losing to Napavine.

But because of what she called “family conflicts,” Hopfer decided to leave the softball program a year later.

Hopfer had many options to consider as a replacement spring sport: She was a standout distance runner in middle school and joined the varsity girls soccer team as an eighth grader. Or, she could have just focused on club softball with the high-profile Washington Ladyhawks.

She met with Allton, who was already two weeks into the baseball season before she joined the team.

“I had a really good team, and I had to tell her she had to earn every little bit she got because she wasn’t going to just take anyone’s lineup spot,” Allton said.

Hopfer swung between junior varsity and varsity for a few weeks before she came up for good before the postseason.

And in the Southwest District tournament, she made her mark.

“Everyone went crazy,” Hopfer said. “And I remember their first baseman, he turned around and stared at me on base for 30 seconds.”

And Hopfer has been a starter ever since then.

There have been adjustment periods for the teenager – starting with swinging a heavier baseball bat.

“I have to use my whole body when I swing,” she said.

And getting into the batter’s box to face somebody pitching overhand – that took time to get used to as well.

“Believe it or not, it is easier because they are so far away whereas in softball, you have to react quicker,” Hopfer said. “I’ve had to actually throttle down (on hitter reaction), and I’ve moved up in the box.”

And being in a boys dugout has been a vastly different experience.

“They will bicker about something, and forget it 10 seconds later,” she said. “Girls won’t cross that line, but if they do, we think about it for days on end.”

Hopfer said she’s heard comments about being a girl on the baseball team, but said the transition with her own teammates was made easier “because I played football with them at recess.”

Now, they are super protective of their sweet-swinging teammate.

“There will be guys on the other team who will ask for my social-media contacts, and my teammates won’t give it to them,” she said, laughing.

As far as going from baseball back to her natural sport, Hopfer admits at first “the softball field felt small.”

“But after that first tournament back, I had the best summer of my life, and that is because I had so much confidence,” Hopfer said. “And I know it came from playing against some big dudes.”